The velvet longhorned beetle (VLB), Trichoferus campestris (Faldermann) (Coleoptera: Cerambycidae), is an invasive wood-boring pest that is native to Asia and Russia. It infests fruit, forest, and ornamental trees, as well as green and dry wood, such as timber and lumber. VLB was first detected in North America in Quebec in 2002, and in the U.S. in Rhode Island in 2006. It has been detected/intercepted in a few other states, mostly in the Midwestern and Eastern U.S., but also in Utah (since 2010). In Utah, VLB is currently found in some orchards, ornamental landscapes, and along natural waterways (Utah, Salt Lake, Davis, and Tooele counties). It spreads to new areas through firewood or infested wood packing material used for imported commodities. Contact the Utah Plant Pest Diagnostic Lab at Utah State University or the Insect Program at Utah Department of Agriculture and Food with any suspect VLB.

Adults have an elongated body that is about ½ to ¾ inch (12-20 mm) long. They have long parallel wing covers (elytra) and vary in color from dark brown to brownishorange, with the legs and antennae usually being lighter in color than the body (Figs. 1 and 2). Their antennae are segmented and about ¾ the length of the body.

The name “velvet” comes from the fine hairs that are irregularly distributed and form light colored “patches” along the body and wing covers (Fig. 3).

From May to August, adults emerge from trees through ⅜ inch (9.5 mm) round exit holes, which they create by chewing through the wood (Figs. 5 and 6). Adults fly at night; peak flight and mating occurs from June to early August. Females lay their eggs on the trunks and large branches of trees (whether healthy, stressed, or dying) and timber (green or dried). Larvae hatch and burrow into the bark, forming galleries (tunnels) (Fig. 7) in the cambium (conductive tissues). As larvae mature, they tunnel into the sapwood and may move into the heartwood. Larval galleries range in size from 2 to 6 inches (5 to 15 cm) wide. Larvae can take two or more years inside the tree or wood to complete their development. Pupation occurs in late winter to spring with a final molt to the adult stage in spring to summer.

VLB can infest apple, cherry, mulberry, peach, and several hardwood, ornamental, and conifer tree species (Table 1). Many tree species may also serve as dry wood (downed logs, wood products, firewood, raw timber) hosts for VLB. It is unknown if VLB prefers stressed or healthy trees; however, VLB seems to be more attracted to medium to large sized trees. Nursery trees are susceptible hosts and may act as a reservoir for the pest to spread to new areas. 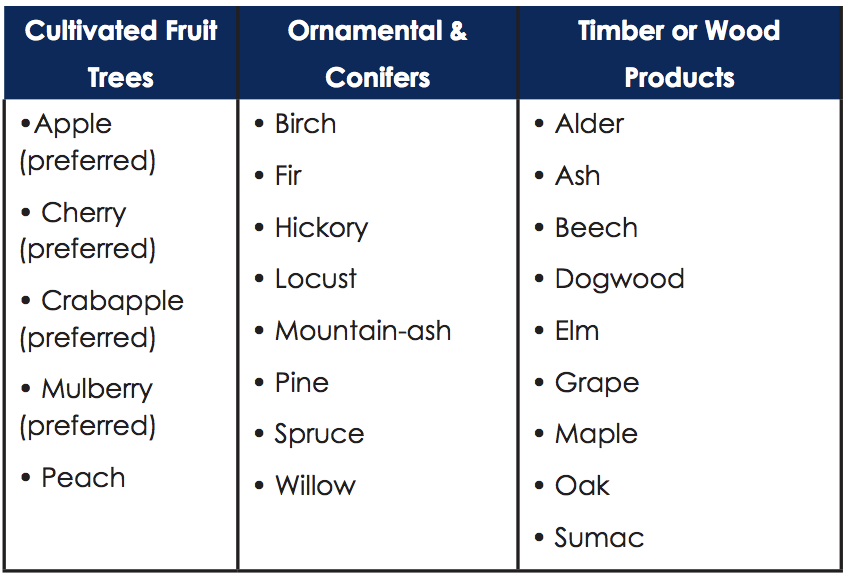 Symptoms include round exit holes on the trunk and main branches (Fig. 6); frass (insect excrement) at the base of the tree; peeling bark; larval tunnels within the cambium or wood (Fig. 7); epicormic branching (shoots that grow from dormant buds in response to tree injury); and a thinning, wilted or yellowing canopy (Fig. 8). Larval feeding may weaken the trees, so that branches are more likely to break off during high wind. Fruit yield, tree longevity, and wood marketability can all be negatively impacted by a VLB infestation.

The best time of year to monitor for VLB is during peak flight from late June to early August. In Utah, high numbers of VLB have been detected in riparian habitats near golf courses and near cull and plant debris piles in commercial fruit production areas. Monitoring in Utah has been successful with Lindgren funnel or cross vane panel traps baited with an ethanol lure (Fig. 9). In addition, Fluon® or Teflon™ should be applied to the surfaces of panel traps to prevent the beetles from escaping the trap. An insecticide vapor strip or ethylene (toxic to mammals) or propylene (nontoxic) glycol should be used in combination with traps to kill trapped insects. Other monitoring methods include visual inspection for adult exit holes and tree injury symptoms (as described previously), and black light infrared trapping (using either commercially or homemade manufactured black light traps).

VLB is one of many pests that can be transported to new areas on firewood cut from infested trees; therefore, be sure to collect or buy firewood within 25-50 miles of where you will be using it to prevent inadvertently moving VLB to non-infested areas. Prevention is a key component in managing VLB. Early detection and proper identification can be accomplished through the monitoring methods described above, and will greatly increase the success of VLB prevention. Unfortunately, VLB can be difficult to control because most of its life cycle is spent within the host tree, where it is protected from foliar insecticides and natural enemies.

Natural enemies of longhorned beetles in the U.S. include predators, parasitoids, and pathogens. Predators include flat bark beetles, cylindrical bark beetles, clerid beetles, click beetles, robber flies, assassin and ambush bugs, thrips, carpenter ants, birds, lizards, spiders, scorpions, toads, and small mammals. Parasitoids include braconid, ichneumonid, and chalcid wasps; and tachinid and sarcophagid flies. Nematodes and fungi have been observed as pathogens of other species of longhorned beetle larvae (Smith 1999). At this time, however, management of VLB is not reliant on biological control.

There are no insecticides labeled specifically for VLB; however, insecticides labeled for longhorned beetles in general should reduce numbers of larvae in infested trees. Insecticides containing the active ingredient imidacloprid (neonicotinoid class) have been used successfully on high-value trees for the control of Asian longhorned beetle, a closely related invasive wood borer. Treatments of imidacloprid can be applied through injection into the tree trunk, or soil drench to the root zone. Apply imidacloprid to infested trees before and during the VLB adult emergence period in the late spring and summer (only apply after bloom on flowering trees). Repeat applications once per year for at least three years to ensure mortality of all ages of larvae and pupae in the infested trees. Be aware that imidacloprid treatments do not ensure complete control because many variables, including weather conditions, tree health, application methods, and insecticide rates affect the systemic movement and reach of imidacloprid into the wood of the tree. Large larvae feeding in deeper wood are difficult to kill with insecticides. Another neonicotinoid insecticide labeled for Asian longhorned beetle treatment is dinotefuran (e.g. Safari); however, dinotefuran products are only registered for use on ornamentals and are not allowed on fruit trees.