European cherry fruit fly (ECFF, Rhagoletis cerasi Linnaeus) (Fig. 1) is a new invasive insect to North America. It naturally occurs throughout most of continental Europe and central and western Asia, and is the most economically important pest of sweet cherries in Europe. ECFF was first detected in North America in Ontario in 2016, and first detected in the U.S. in New York in 2017. The predicted geographic range of ECFF in the U.S. includes USDA plant hardiness zones 2-10, which spans most of the country, including Utah. Since adults fly only short distances, spread occurs primarily through movement of infested fruit. If you suspect ECFF in Utah, contact the Utah Plant Pest Diagnostic Lab.

Adults are about 1/8 to 3/16 inch long, slightly smaller than a house fly. The body is black with yellow markings on the head and thorax (midsection) (Figs. 1-3). Wings are transparent with four characteristic bluish-black bands. ECFF is a close relative of other Rhagoletis species in North America, including the western cherry fruit fly (WCFF, R. indifferens), which is the primary insect pest of sweet and tart cherries in Utah, and apple maggot (R. pomonella), which has also been caught in cherry orchards in Utah. The three species are distinguished by coloration and wing patterns. WCFF is about 1/5 inch long, slighter larger than the ECFF. It has a black body with white bands on the abdomen, and transparent wings with three dark bands, one of which forms a malformed letter “F” (Figs. 3 and 4). Apple maggot is about 1/4 inch long, the largest of the three species and about the size of a common housefly. It has a black body, a prominent white spot on its lower thorax, white bands on the abdomen, and a bold “F” shaped mark on its wings (Figs. 3 and 4).

Eggs are white, oval-shaped, and about 1/32 inch in length. Eggs are deposited under the skin of ripening fruit.

Larvae are creamy-white and translucent, legless, and shaped like a typical fruit fly larva: tapered at the head and rounded at the tail (Fig. 5). Third (last) instar larvae can reach up to 1/4 inch in length.

Pupae are pale yellowish-brown and 1/8 to 3/16 inch in length (Fig. 6). Larvae pupate up to 2 inches deep in the soil under the host plant.

Like WCFF, ECFF has one generation per year. It overwinters as a pupa in the soil underneath or near the host plant and emerges as the fruit ripens. Adults are most active from late May to early July when conditions are warm and dry, and can live up to 50 days, depending on temperatures. Mated females use their ovipositor to insert eggs into ripening fruit (i.e., fruit that are yellow to pinkyellow in color), but will continue to lay eggs until harvest. Females prefer to lay eggs in fruit that are in full sun, and usually lay only one egg per fruit. They can lay 30 to 200 eggs in their lifetime. Eggs hatch in 1 to 2 weeks. The larvae feed on the flesh of developing fruit for 4 to 6 weeks and progress through three stages. Mature larvae exit the fruit and drop to the ground to burrow into the soil and pupate.

Injury to fruit is caused by oviposition (egg-laying) scars (Fig. 7), but primary damage is caused by larval feeding, defecation, and tunneling in the fruit flesh. Infested fruit may soften prematurely, develop brown spots (Fig. 8), wilt or shrivel, and fall off the tree. An exit hole may be visible as the single larva vacates the fruit (Fig. 8). Feeding damage can result in fruit losses of up to 100% if left unmanaged. 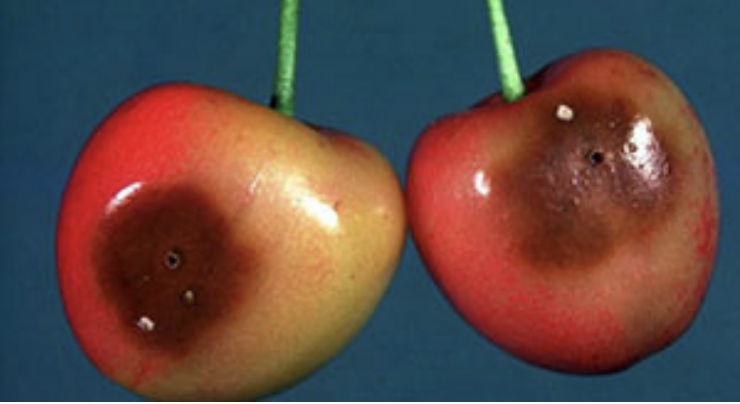 An effective monitoring tool is a yellow sticky card baited with an ammonium acetate or carbonate lure (Fig. 9). Traps should be placed in the fruiting canopy of the tree, shortly after bloom and before the fruit start to ripen and become susceptible. Adult captures are higher in traps placed in the sunny or southern part of the tree. Sweep netting can also be used to survey for ECFF in shrubs and shorter growing hosts, such as honeysuckle.

Cultural control options include early and complete harvest, maintaining a clean orchard floor by removing dropped fruit, removing wild and abandoned host trees, and placing exclusion netting (1.3 mm net) on trees. Additionally, covering the soil under the tree canopy with ground cover, weed barrier fabric, or mulches will help prevent larvae from burrowing into the soil or emerging adults from exiting the soil.

Insecticide sprays targeting the adult are the primary tactic for controlling this pest. Larvae develop within the fruit where they are protected from most insecticides. Insecticides used for the successful treatment of ECFF in Europe and those currently labeled for use in sweet and/ or tart cherry production in Utah are listed in Table 1. Rotate among insecticide classes/modes of action (MoA) to reduce the development of resistance. Do not apply insecticides while pollinators are active.