Peach twig borer (Anarsia lineatella) is found worldwide wherever stone fruits are grown.  In Utah, it is a significant pest on peach/nectarine and apricot.  There are typically three generations of peach twig borer in northern Utah (May-June, July, and August-September) and four or more in southern Utah.  Young larvae that have overwintered emerge from protected shelters on limbs and twigs during bloom to petal-fall, and burrow into developing shoots.  When populations are high, spring larval feeding can cause substantial damage to trees.  The first adults are usually detected during April in southern Utah and May in northern Utah.  Economic yield loss occurs during the summer when larvae of subsequent generations attack the fruit.  Insecticides are currently the most effective control tactic.  Lower toxicity options such as microbial products and insect growth regulators can provide excellent control when timed with early larval feeding and egg hatch.

As fruit pits harden (and fruit develops color), the fruits become more appealing to larvae.  Larvae enter primarily through the stem end and feed just under the skin or next to the pit, especially if the pit splits open.   Larvae will also enter where fruit touches another fruit, leaves, or a branch.  After larvae complete development inside fruit, small exit holes may be visible. Chewed fruit is unfit for sale and is predisposed to micro-organisms that cause rotting.

Insect development is temperature-dependent, so phenological events such as moth flight and egg hatch can be predicted based on accumulated heat over time, called degree days (DD).  A degree day model for specific phenological events has been developed for many orchard insects, including peach twig borer. Like codling moth, peach twig borer development occurs between the lower and upper temperature thresholds of 50º F and 88° F.  The degree day model is used to more accurately time and reduce the number of insecticide applications.

In order for the model to work, one must first know the date of consistent moth flight, called biofix. Biofix is a biological marking point from which an insect’s development is measured for the remainder of the season.  When biofix is determined, the insect model begins at 0 degree days.  Biofix is determined using pheromone traps.

Large plastic delta pheromone traps are recommended to monitor adult activity. Pheromone lures are sold separately and placed on a sticky liner inside the trap to attract and trap male moths. Lures are available in a 30-day or 60-day formulation.

To know when to hang pheromone traps, degree days are recorded starting on March 1 in northern Utah or January 1 in southern Utah. They are calculated as the area under a sine wave curve, based on the daily maximum and minimum air temperatures.  For Utah, this information can be obtained from the Utah Climate Center “Utah TRAPs” online tool, for from your county extension office. (Utah TRAPs stands for Temperature Resource and Alerts for Pests).

Prune out shoot strikes in the late spring and early summer as soon as they are detected to prevent these larvae from completing development and contributing to summer generations of the pest.  If old shoot strikes are observed during pruning in late winter to early spring, plan to apply early season controls.  Old strikes hold onto the dead leaves and appear as “flagged” terminals.

There are numerous natural enemies that will suppress peach twig borer populations.  In California, several parasitic wasps (Chalcididae) and ants (Formica spp.) have destroyed a significant portion of larvae in some years.

Mating disruption (MD) is a technique that uses pheromone dispensers that permeate the air in an orchard and make it difficult for males to find females.  The idea is to disrupt mating and reduce the insect population.  See the USU Fact Sheet on Peach Twig Borer Mating Disruption.

This option is used by larger organic farms, especially when used in combination with organically approved insecticides such as Bacillus thuringiensis, spinosad, kaolin clay, horticultural oil, or others.

Treatments at the delayed dormant timing and/or during bloom are critical for reducing the severity of summer generations (Tables 2 and 3).  Good coverage is important because larvae are killed after consuming insecticide residues as they tunnel in shoot twigs.

Studies conducted in northern Utah confirm that applications that are timed using the degree-day model (described above) can be very effective.

† Biofix is when at least one moth is caught on consecutive nights.

*Caution:  Synthetic pyrethroids can cause spider mite populations to flare during hot weather by killing predaceous mites, so summer treatments should be avoided.

Examples of brands may not be all-inclusive, but are meant to provide examples of effective insecticides registered on apple and pear in Utah. 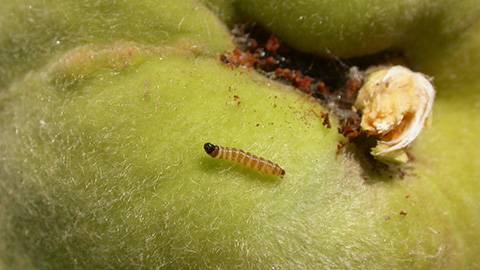 Codling moth, Cydia pomonella, is the key insect pest of apple, pear, and walnut throughout the world, including Utah (apple and pear). Effective management practices are based on accurate determination of the first flight of codling moths in the spring,

Codling moth, Cydia pomonella, is the key insect pest of apple, pear, and walnut throughout the world, including Utah (apple and pear). Effective management practices are based on accurate determination of the first flight of codling moths in the spring, 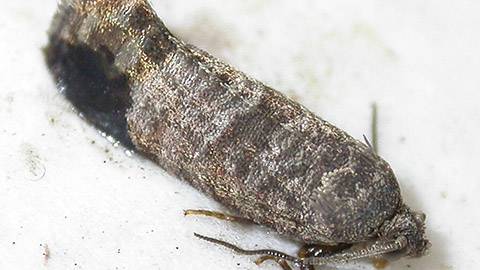 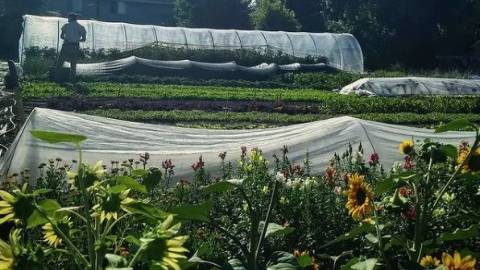 Row covers on Utah farms. As an integrated pest management tool, row covers act as a physical barrier that prevents the movement of pests such as insects, birds, and mammals, to host plants. 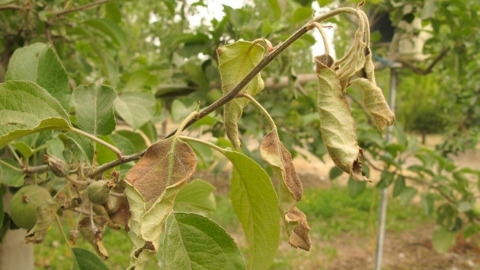 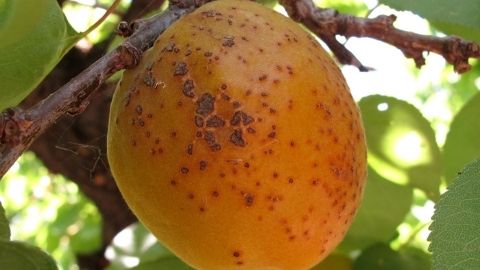 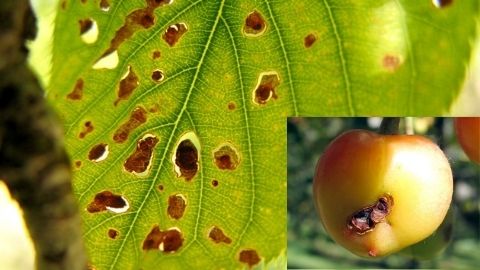 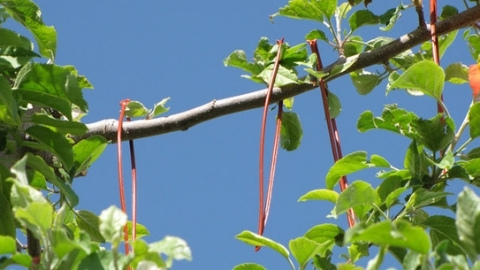 Mating disruption as a method to manage orchard pests became commercially available in the early 1990s, and was adopted by many Utah growers about a decade later. Use of this pest management technology c 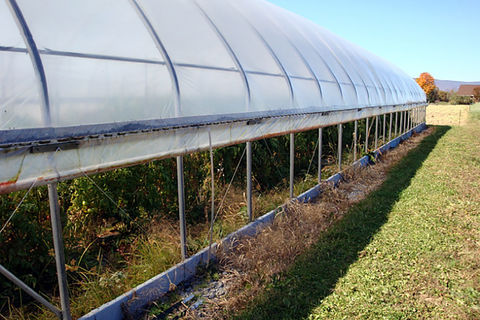 Thrips are a common pest that can be found on many high tunnel crops, plus hundreds of weed species. Two species commonly found in in Utah include Western flower thrips (Frankliniella occidentalis) and Onion thrips (Thrips tabaci). Bean thrips (Caliothrip 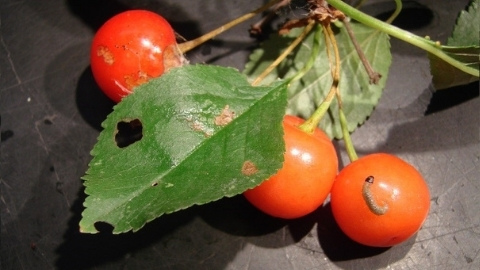 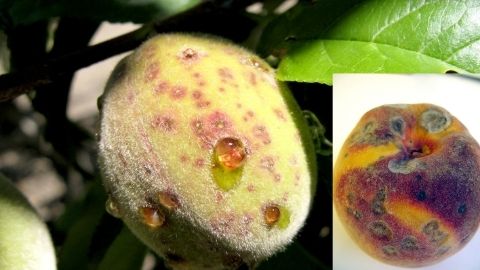 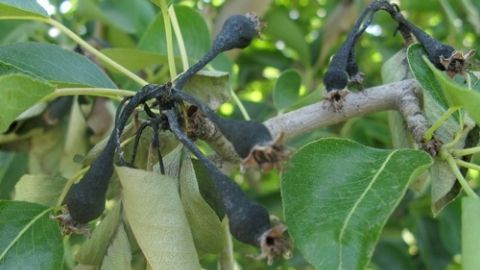 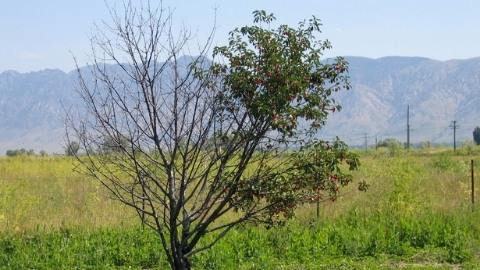 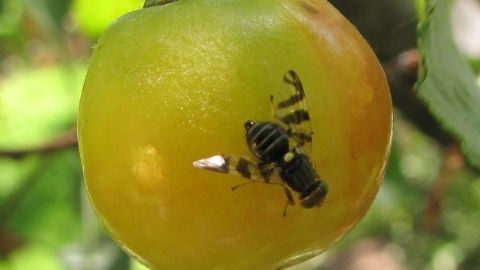 The western cherry fruit fly (Rhagoletis indifferens, Order Diptera, Family Tephritidae) is the most important pest of sweet and tart cherries in Utah. Once the skin of fruits becomes soft enough to penetrate, adult 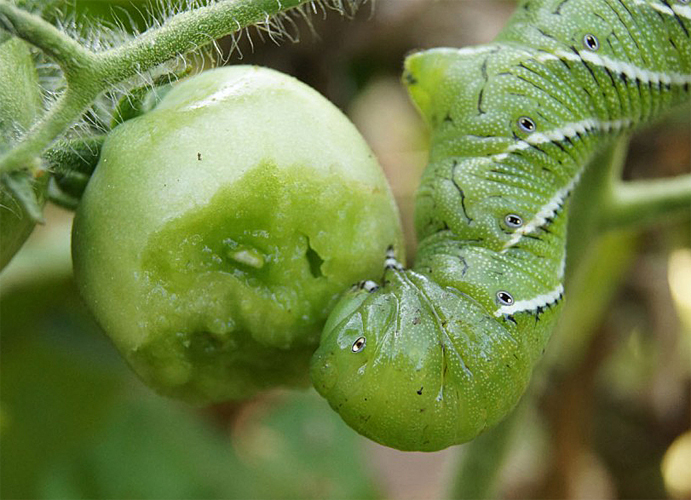 Tomato and tobacco hornworms are closely related species that cause similar damage to the same host plants. Both are equivalent in size and appearance. Tomato hornworms are the larval stage of the fivespotted hawkmoth (Manduca quinquemaculata) and tobacco