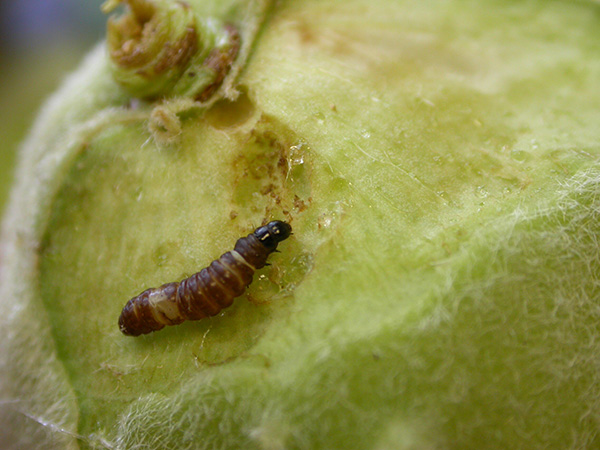 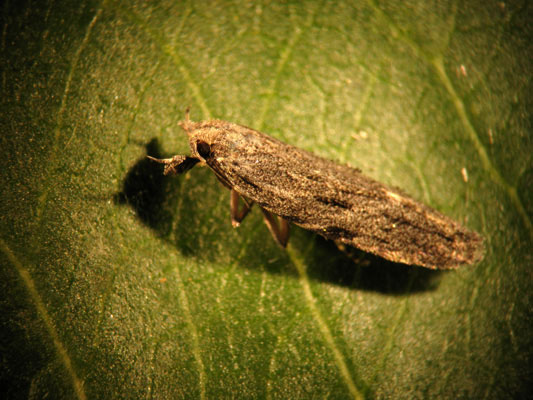 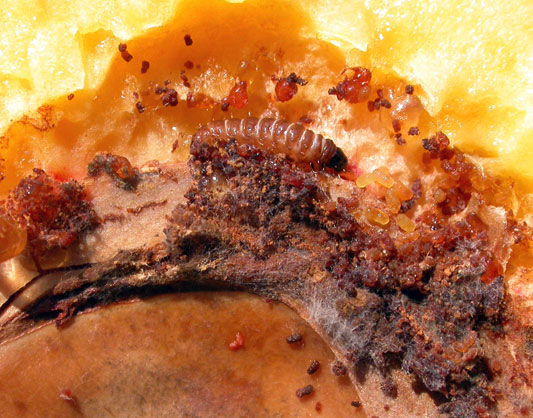 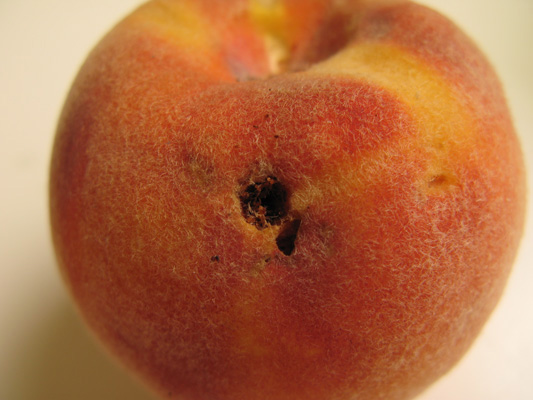 Peach twig borer (Anarsia lineatella) is found worldwide wherever stone fruits are grown and in Utah it mostly affects peach, nectarine, and apricot. There are typically three generations of peach twig borer in northern Utah (May-June, July, and August-September) and four or more in southern Utah. Young larvae that have overwintered emerge from protected shelters on limbs and twigs during bloom to petal-fall and burrow into developing shoots.

Larva are found in cracks, crevices, and limb crotches of two- and three-year-old wood.  The area between the body segments is lighter in color giving larvae a distinctive striped appearance.  First generation larvae feed in the terminal shoots while summer generations attack the fruit. Pupa are smooth and brown without a cocoon, and found in cracks and crevices of bark on limbs and the trunk. Adult moths are small, 0.3 to 0.5 inches long, with light and dark gray mottled wings. Scales on the head cause it to appear pointed. Adults of the overwintering generation emerge beginning in mid-May in northern Utah (April in southern Utah). Eggs are yellowish white to orange, oval shaped, and heavily sculptured, and are deposited singly on young, tender shoots, on the underside of leaves, and on developing fruit beginning about the time of shuck fall.

Insecticides:Treatments at the delayed dormant timing and/or during bloom are critical for reducing the severity of summergenerations (Tables 2 and 3). Good coverage is important because larvae are killed after consuming insecticide residues as they tunnel in shoot twigs.

Rotate among insecticide classes to prevent development of resistance to insecticides in the peach twig borer population.

Biological Control: There are numerous natural enemies that will suppress peach twig borer populations. In California, several parasitic wasps (Family Chalcididae) and ants (Formica spp.) have destroyed a significant portion of larvae in some years.

Cultural Controls: Prune out shoot strikes in the late spring and early summer as soon as they are detected to prevent these larvae from completing development and contributing to summer generations of the pest. If old shoot strikes are observed during pruning in late winter to early spring, plan to apply early season controls. Old strikes hold onto the dead leaves and appear as “flagged” terminals.

How to Monitor for Peach Twig Borer