Japanese beetle (JB) is an invasive pest that can be highly destructive to ornamental plants, trees, shrubs, turfgrass, and some fruits and vegetables. JB was likely introduced from Japan into the eastern U.S. in 1916 in shipments of ornamental plants. It is now established in most Eastern and some Midwestern states. In 2006, a small population of adult beetles was detected in Orem, Utah. A subsequent and aggressive eradication program directed by the Utah Department of Agriculture and Food (UDAF) successfully eliminated JB from Utah. Even though constant pressure from travel and trade resulted in eight beetle captures in monitoring traps from 2012-2015, follow-up, high-density trapping resulted in no additional captures. Then in 2018, three more beetles were detected in Salt Lake County. The following year, in 2019, 36 beetles were captured in Salt Lake County and seven in Davis County – the highest in more than a decade. UDAF declared an emergency in 2020 and is now working to eradicate this pest. If you suspect JB in Utah, please contact the Utah Department of Agriculture and Food or USU’s Utah Plant Pest Diagnostic Lab.

Adults are oval, metallic green with bronze-colored wings, and are about ½ inch long. Males are slightly smaller than females. Adults have six white tufts of hair along each side of the body (i.e., five pairs along each side of the abdomen and another pair on the last abdominal segment) and prominent spines on their legs (Figs. 1 and 2). Grubs are creamy white, C-shaped, and 1 inch long when fully grown (Fig. 3). Adults may be found clustered together on plants and grubs can be clumped under the soil of turfgrass.

JB attacks over 300 plant species, including rose, grape, sweet corn, peony, zinnia, raspberry, sunflower, maple, apple, cherry, peach, birch, hawthorn, and willow (Table 1). Both the adults and grubs (immatures) can cause significant damage when in high numbers. Damage caused by adult beetles appears as skeletonized leaves with veins still intact (Figs. 4 and 5). They also chew holes in flower buds and petals, soft fruits, and corn silks (Fig. 6). Grubs feed on roots belowground, causing discolored patches of turfgrass which, if heavily damaged, can feel spongy and pull easily away from the soil surface (Figs. 7 and 8). Other plants may begin to display yellow and brown foliage. Adults can be found individually or clustered together on plants (Fig. 5), whereas grubs can be clumped under the soil of turfgrass (Fig. 8).

Table 1. Plants known to be susceptible to Japanese beetle. 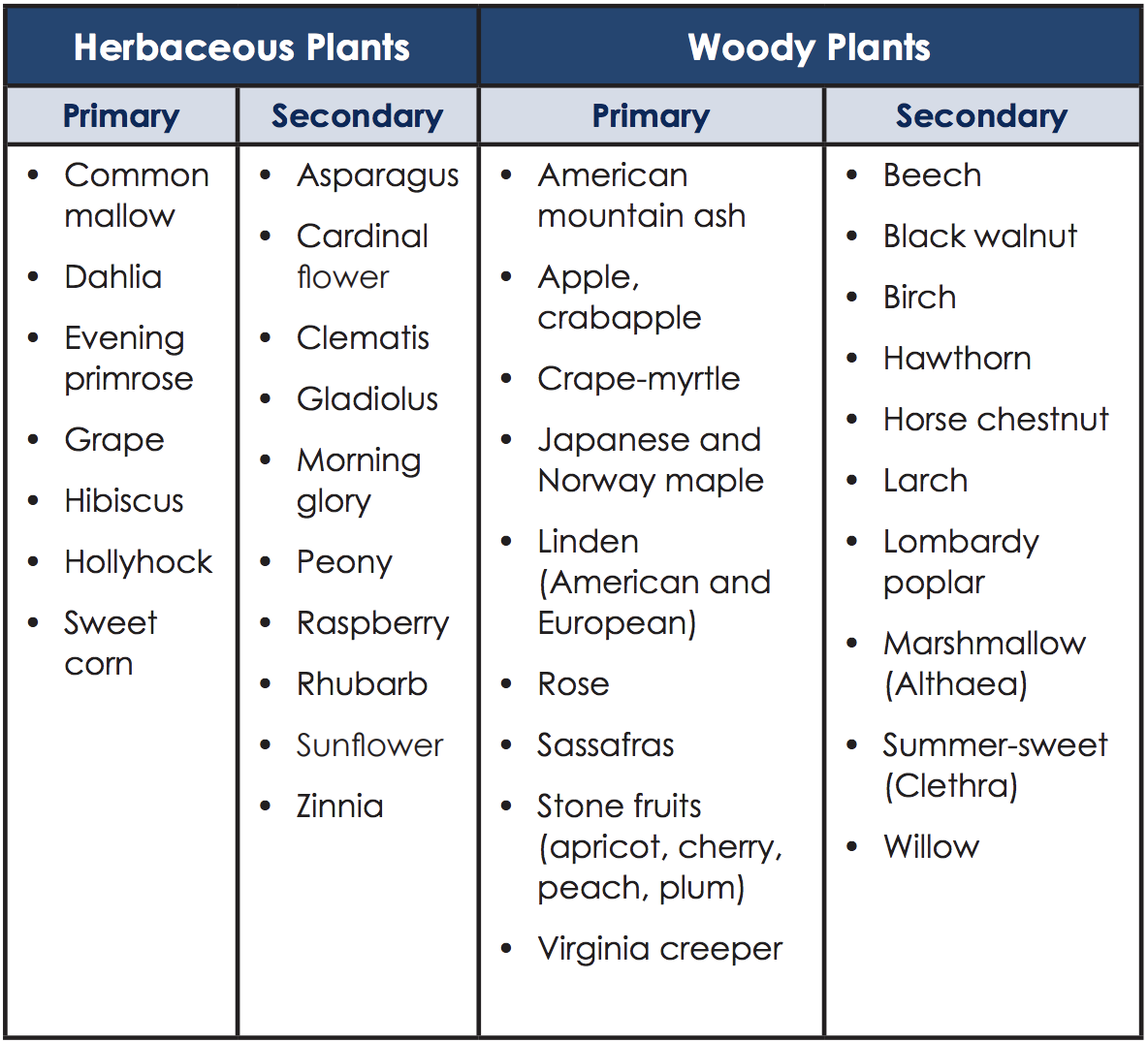 JB has one generation per year and grubs spend about 10 months under the soil surface (Fig. 9). Adults emerge from turfgrass in late June and immediately begin to feed on low-growing plants such as roses and shrubs. Adults eventually move higher to tree foliage to feed and mate. Mated females move back to turfgrass to lay small egg masses in soil cavities. Females prefer to lay eggs in healthy, vigorous turfgrass and will avoid stressed lawns. Large plantings of turfgrass (e.g., athletic fields, parks) are especially attractive. Most eggs are laid between mid-July and early September. The eggs hatch into small grubs that feed on roots underground until late September when the temperature cools. The near mature grubs burrow 4 - 8 inches into the soil and remain inactive during winter. In the early spring, they begin to feed again and turn into resting pupae. The pupae hatch into adults and emerge from the soil in spring; thus, their life cycle requires a full year to complete.


Fig. 9. Japanese beetle has one generation per year and overwinters as a grub (larva) in the soil.

JB can be monitored using traps or visual surveys for adults or grubs. Traps are baited with two chemical lures, a pheromone (sex attractant) and a floral lure, that work together to attract both male and female beetles. Traps are funnel-shaped and either all green in color or bicolor with yellow and green (Fig. 10). The all-green traps are more discreet and capture fewer non-target insects (e.g., pollinators); however, the bicolor trap is more attractive to JB. Traps should be placed in representative locations for monitoring, but at a reasonable distance from high value host plants to avoid plant injury. Traps should be emptied as frequently as possible (1-3 days) to prevent dead beetles from rotting and releasing ammonia, which is known to repel other JBs.

During the summer (mid to late June), look for adults on ornamental plants, trees, and shrubs. Scout susceptible plants at least once per week, especially if adults were active the previous year. Adults are especially attracted to ripening fruits and rosebuds. JB prefer warm, sunny conditions, so visual monitoring should be done during the day and on the sunny side of the plant.

Begin monitoring for grubs in late spring (April to June) and late summer (August to October) by collecting soil and root samples from damaged turf where JB is suspected to occur. Cut a 6 inch square piece of turf with a hand trowel to examine the upper 2 inches of the root zone. Pull apart the roots and soil to look for larvae and feeding injury. After looking through the soil sample, replace the soil and return the turf. Turfgrass that has been fed upon will turn yellow to brown as it dies. Leaves and crowns of grass plants will pull away easily from the roots. Another clue to the presence of grubs in sod is predator digging activity, such as from birds, skunks, badgers, and other grub-eating predators.

Although there have been occasional detections of JB in Utah, the state is currently recognized by the National Plant Board as a “Category 1” noninfested state. This status is granted as a result of the state’s quarantine regulations and annual monitoring efforts. Therefore, Utah residents are advised against taking JB control measures at this time. Instead, JB sightings should be immediately reported to the Utah Department of Agriculture and Food  or Utah Plant Pest Diagnostic Lab. However, gardeners, landscapers, and professional growers in JB-infested areas of the country should take management of this pest seriously to protect valuable host plant material. The following content is for informational purposes. Control of JB can be difficult, as adults are highly mobile and can easily infest new areas, and adults and grubs often occur on different host plants. The following cultural control strategies can reduce adults and grubs to tolerable levels in most situations.


Insecticide applications can be an effective management strategy when JB populations have exceeded economic or aesthetic injury thresholds, but should only be used when necessary. Application of foliar insecticides to trees, shrubs and other ornamentals is not recommended because insecticides are expensive and generally ineffective in landscape situations. However, insecticides may help to protect commercial crops, gardens, nursery stock, and high value landscape plantings. Insecticides known to be effective for JB control include:

See USU Extension’s Invasive Fruit Pest Guide for Utah for more information about effective insecticides. Some insecticides may target a specific life stage and may only be used on specific crops. Be sure to read the label and use only as directed. Note that lawn treatments for grubs would also target JB.