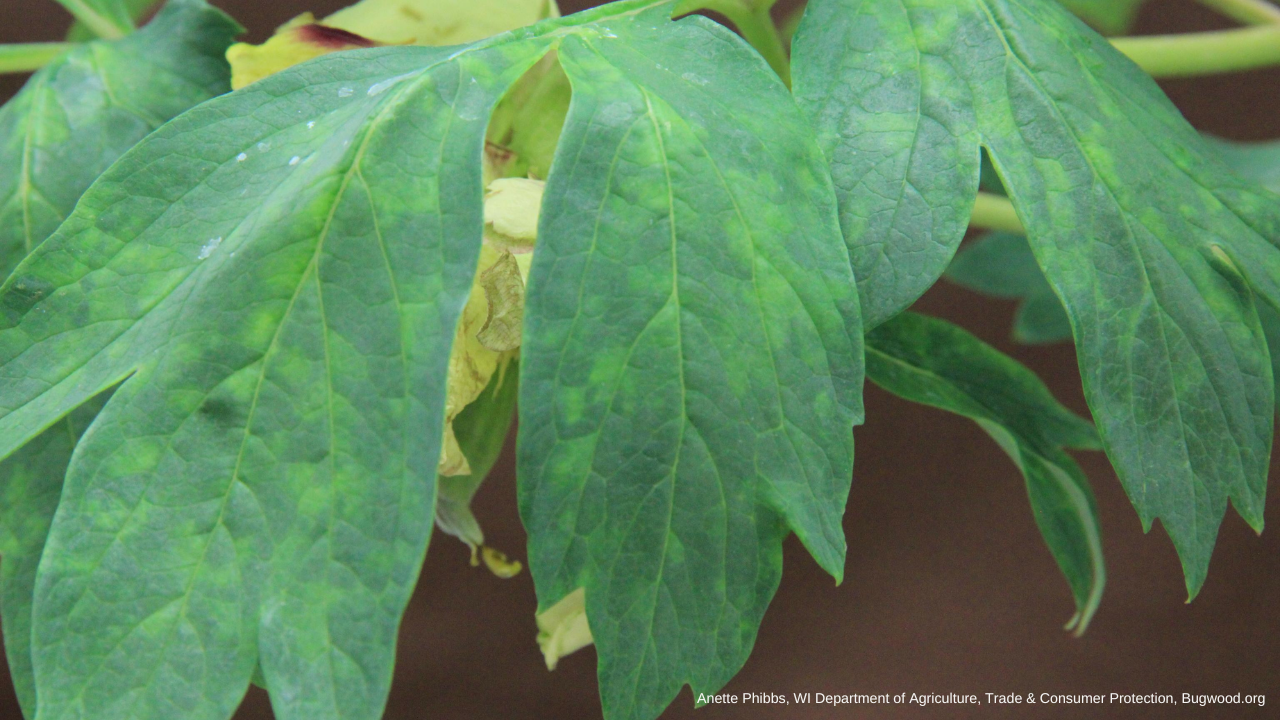 Tobacco Rattle Virus on Peony
In early June 2022, peony samples were submitted to the Utah Plant Pest Diagnostic Lab at Utah State University with foliar damage resembling symptoms caused by Tobacco rattle virus (TRV). The symptoms on the foliage ranged from none to yellow ringspots and wavy, yellow lines or mosaic symptoms. We sent the sample to a commercial testing lab that confirmed TRV. This virus is listed as occurring in Utah; however, this is the first diagnosis by the USU plant pathology lab. TRV belongs to the Tobraviruses, a genus that is transmitted by stubby root nematodes (Trichodorus and Pratrichodorus spp.). In addition, the virus could be introduced into a garden or farm by infected planting material. The virus has a large host range of over 400 ornamentals such as sunflower, tulips, hosta, and bleeding hearts, and vegetables such as potatoes (causing corky ringspot of potato), cucumber, pepper, spinach, beets and many weeds. In many host plants, the virus does not cause symptoms; however, other hosts can have stunted growth, produce fewer flowers, or have undesirable ring spots on the foliage.

Spread of the virus within a planting can be caused by stubby root nematodes. It has been reported that transmission from plant to plant can also occur by using contaminated knives and pruning tools, for example, while cutting flowers and not disinfecting tools between plants. Therefore, symptomatic plants should be removed to minimize infection risk to other plants.

First Occurrence of Freesia Sneak Virus in Utah
In early spring 2022, we received samples of freesia plants with chlorotic, necrotic (brown) and purple lesions and streaks. The symptoms matched what is known as Freesia sneak virus (FSV). Using molecular tools, the suspected virus was confirmed both in the USU plant pathology lab and by USDA APHIS. Other than this Utah detection in the U.S., the virus has been intercepted in California and found once in Virginia. Freesia sneak virus has just two known hosts – Freesia sp. and Lachenaliasp. Both plants are monocots that produce bulbs.

FSV is transmitted by the soilborne fungus, Olpidium brassicae. The fungus can survive as resting spores for up to 20 years in the soil and the virus can survive within the spores for several years. The fungus infects plant roots, and introduces the virus after infection. In the freesia sample submitted to USU, the fungus was not found in the soil or roots. Another mode of spread is by infected plant material, which likely happened with this sample.

The virus only affects leaves, causing small flecks of bleached, purple, and brown spots. It does not cause symptoms on flowers, and effects on cut-flower yield are unknown. The only management option available is to remove the symptomatic plants and destroy them; they should not be composted.

If you grow peony and/or freesia and see symptoms that match Tobacco rattle virus or
Freesia sneak virus, please contact Claudia Nischwitz or Melanie Stock for identification. Testing is free for Utah commercial cut flower producers and $30 for homeowners.