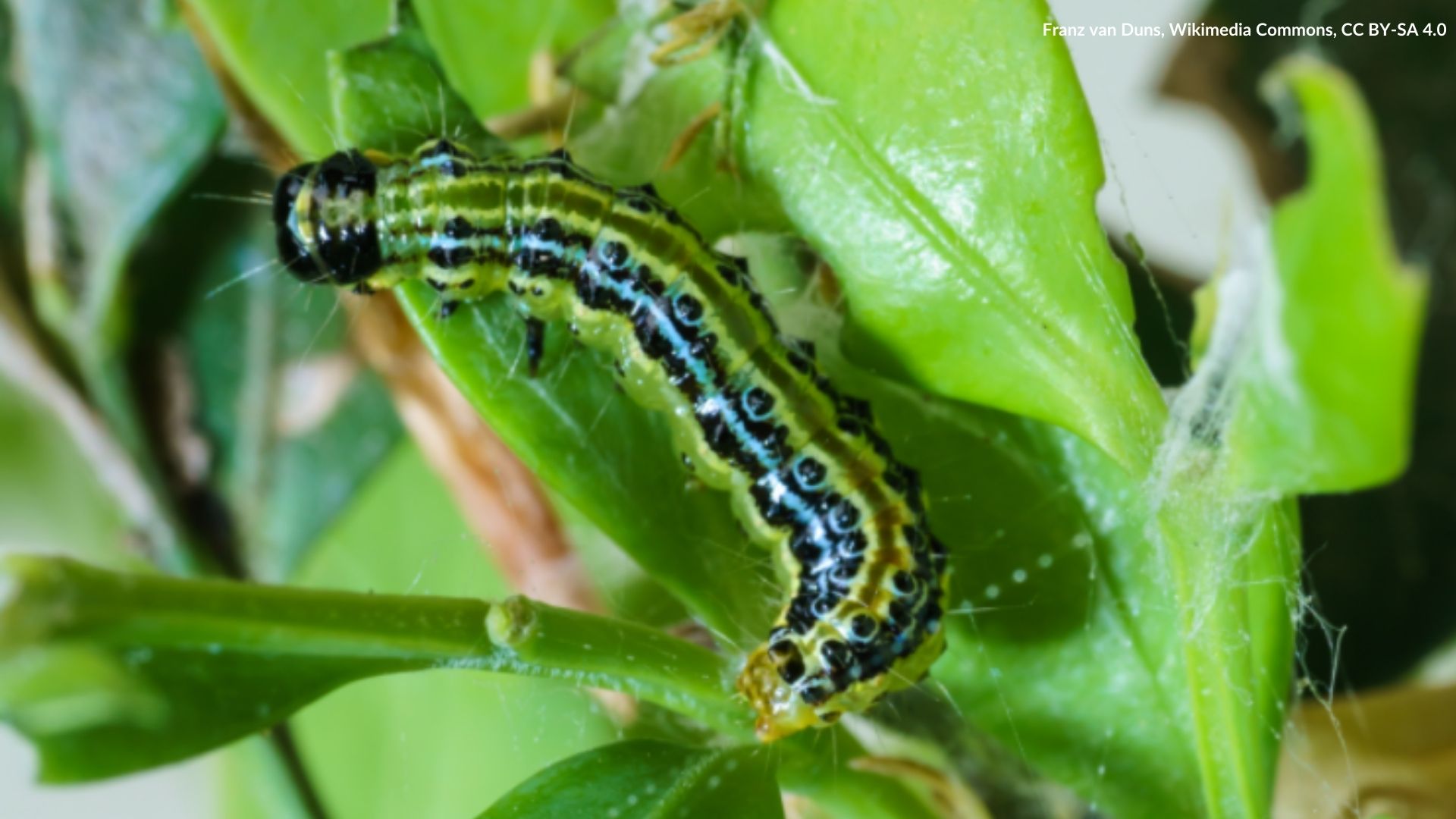 The box tree moth (Cydalima perspectalis) is a new invasive pest to the U.S. It is native to temperate and subtropical regions in eastern Asia. It invaded Germany and the Netherlands in 2007, likely via the nursery trade, and is now a serious pest of wild and ornamental boxwoods (Buxus spp.) throughout much of Europe, western Asia, and northern Africa. This pest was first detected in North America in Toronto in 2018, and then more recently in the U.S. in Connecticut, Michigan, and South Carolina after infested boxwood nursery stock was delivered from a nursery in Ontario between August 2020 and April 2021. Some potentially infested nursery stock was also shipped to four other eastern U.S. states.

State officials and the U.S. Department of Agriculture’s Animal and Plant Health Inspection Service (USDA APHIS) are currently working to determine if these and other states are impacted. To prevent additional spread, USDA APHIS has halted the importation of Buxus, Euonymus, and Ilex. The latter two plant genera are known to only be impacted by this pest in Japan.

Adult box tree moths have a wingspan of about 1.5 inches and are typically white-bodied with a brown head and abdomen. Most moths have a brown border along the outer margins of the wings while up to 10 percent are mostly brown in color. Moths live for two to four weeks and are active between April and July, flying mostly at night and only during daylight hours if disturbed. Eggs are yellow and laid singly or in clusters of up to 20 on the underside of leaves. Before they hatch, small black dots become visible in the gelatinous eggs; these dots indicate the larval head. Larvae (caterpillars) are green and yellow with white and black markings and 1.5 inches in length when mature. They feed on leaves and bark of boxwood, causing defoliation, stem girdling, and death of the plant. Larvae are active from September to October, and after overwintering, they re-emerge to continue feeding and pupating the following spring.

You can help prevent the spread of the box tree moth by inspecting recently purchased boxwoods, as well as those planted in your area, for signs of the moth and damage, and then reporting suspicious sightings to the Utah Plant Pest Diagnostic Lab at Utah State University or the Insect and Pest Program at the Utah Department of Agriculture and Food. Note that the adult stage of the melonworm (Diaphania hyalinata) can be easily mistaken for the box tree moth adult. The melonworm occurs throughout the year in parts of Central and South America, Africa, and southern Florida. Although it often migrates to other southeastern U.S. states and even more northern states during the summer, it is not known to be present in Utah.