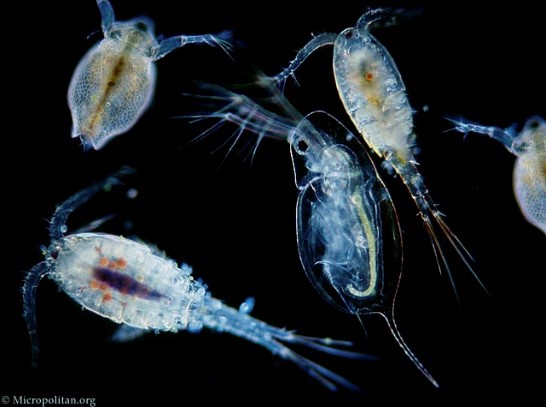 Zooplankton are microscopic animals that are found in most lakes, reservoirs, and ponds. Most can be seen as tiny dots moving in the water, but they are most easily observed with a microscope.

Common groups of freshwater zooplankton include tiny crustaceans, such as copepods and cladocerans. Most of the cladocerans and many copepods consume microscopic algae.  These animals reproduce rapidly and are such effective “grazers” that they can consume almost all the algae in a water body, turning a green lake into a clear blue lake. In turn, they are an important food source for many freshwater fish.

Approaches to improving water clarity in lakes, ponds, and reservoirs typically fall into two broad categories: the first is to control the nutrients driving the algae abundance. This is referred to as “bottom-up control." Top-down control tries to maintain high numbers of algae grazing zooplankton, usually by controlling the fish that prey on the zooplankton.

In lakes, many zooplankton and bottom dwelling macroinvertebrates take advantage of the more abundant food at the surface while also avoiding being eaten by fish by “migrating” down into darker waters during the day and moving up to the surface waters at night.