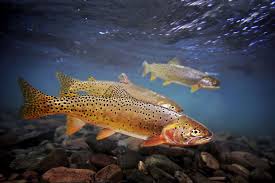 Fish are important members of aquatic ecosystems and indicators of water quality.

Different species of fish have adapted to different water quality conditions. Some fish, such as the non-native carp, and native fish like the June sucker and Colorado pikeminnow can tolerate warmer water temperatures, lower dissolved oxygen levels and higher turbidity. Some environments, like the Virgin River in Southern Utah and the Jordan River in the Salt Lake Valley are naturally warmer and are suitable habitats for these “more tolerant” fish species.

Fish depend on specific water conditions. These vary from species to species, but some baseline conditions must be met to ensure a healthy fish population.

Dissolved Oxygen- Fish breathe oxygen that is dissolved in the water. In the immature stage, many species require high levels of dissolved oxygen in order to survive. The lower the temperature of water, the higher the solubility of oxygen. For this reason more tolerant species such as carp will be found in warmer waters.

Turbidity- Different species tolerate and prefer different levels of turbidity. For example, Brown Trout and other fishes found in fast moving, mountain streams prefer clear, oxygen rich water and large stream bed particle size. They lay their eggs in gravel or attach them to rocks. Many fish in these non-turbid waters also seek shelter under stones. Inversely, species such as Carp are well adapted to murky, less oxygen rich water. For species of fish ill-adapted to turbid waters, the ability to hunt for prey may be hindered. In some instances, fish gills can even be clogged by the excess sediment. Turbidity changes throughout seasons (naturally) and in response to human activity. Streams are generally more turbid during spring runoff. Humans can also influence turbidity by releasing extra sediment into rivers and streams by construction and other activities.

Nutrient enrichment- added nutrients from human sewage, fertilizer or manure can accelerate the growth of algae and other plants. When these plants die decomposition by microorganisms can use up dissolved oxygen in the water.

pH- Dumping of industrial pollutants and runoff from mining activities can lower pH (making water more acidic). Water that is acid (pH below 7) can reduce the success of fish eggs and irritate the gills of fish. It can also so negatively impact macroinvertebrate populations, a food source to many fish.

The top predator in an ecosystem excerpts top-down control on the population of consumers and producers. 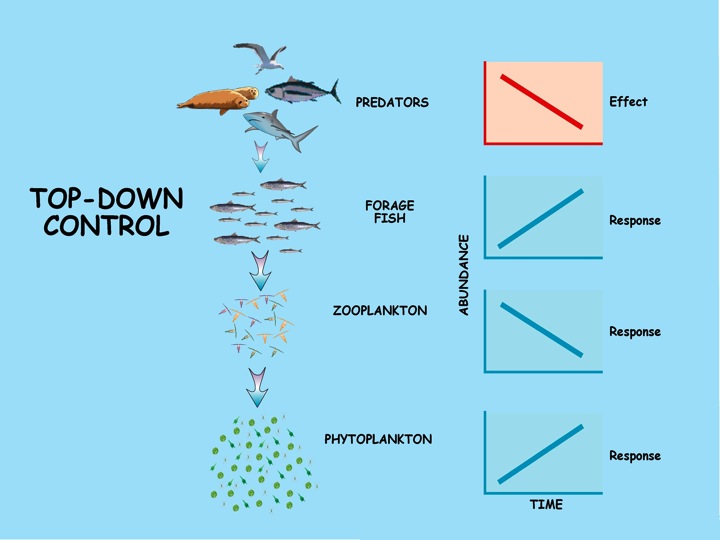 Fish are sensitive to many different aspects of water quality including pH, turbidity, temperature, and dissolved oxygen levels. They also are part of a food web. In streams, fish like the native Bonneville Cutthroat Trout feed on macroinvertebrates. Both the trout and their prey, macroinvertebrates, are sensitive to natural and human-induced changes in water quality.