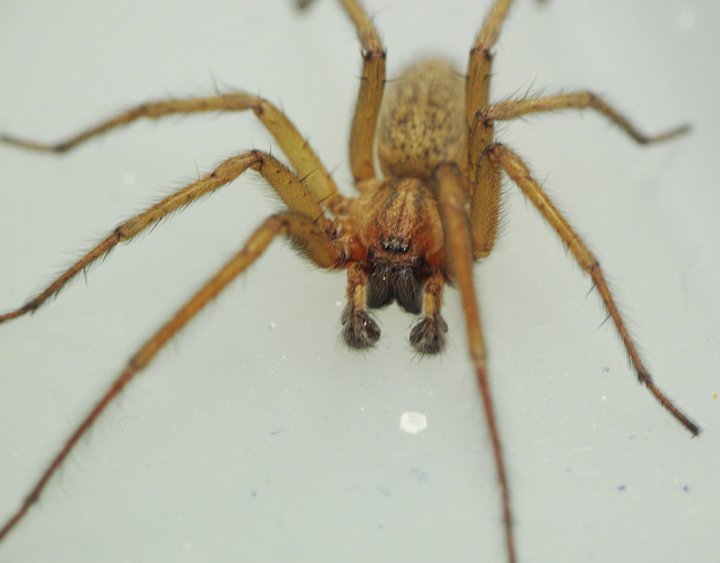 Hobo spiders (Tegenaria agrestis) are one of the most common indoor spiders found in northern Utah. It is currently undetermined if their bite causes necrotic lesions in humans. For more information on this debate, read the links below. Hobos cannot be identified by color alone; have your spider identified by the UPPDL for an accurate diagnosis.

Remember that there are also related, similar-looking spiders to hobos in Utah. Grass spiders (Agelenopsis sp.) are often responsible for the small funnel webs abundant in shrubs and grass. They are not harmful to people. 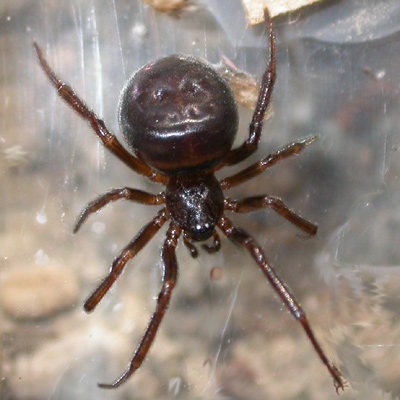 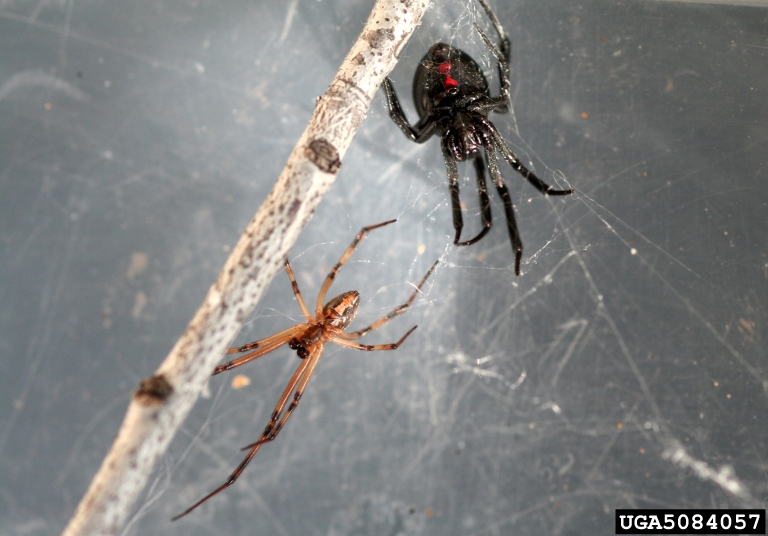 Closely related, the false black widow (Steatoda grossa) closely resembles the black widow, but lacks the infamous red hourglass shape on the underside of the abdomen. These spiders pose no threat to people, and can actually prey upon black widow spiders, amongst other arthropod pests.

Black widow spiders (Lactrodectus hesperus) are the most dangerous spiders to humans in Utah. Bites may be fatal to young children or older adults. Fortunately, widow spiders are fairly sedentary and spend majority of the time in their webs. Bites frequently occur when cleaning the garage, shed, areas around the exterior of the house, or when moving firewood. Always wear thick work gloves when working in these areas. 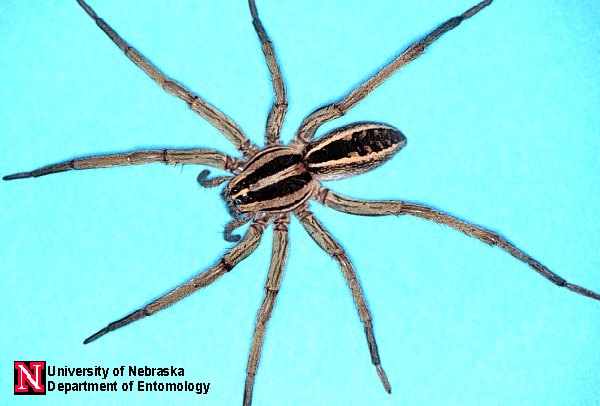 In the genus Hogna, Giantwolf spiders (1.5"-2" diameter) are commonly encountered in fall in Utah. Like other wolf spiders they are not of medical concern. Catch the spider in a container and release outdoors. 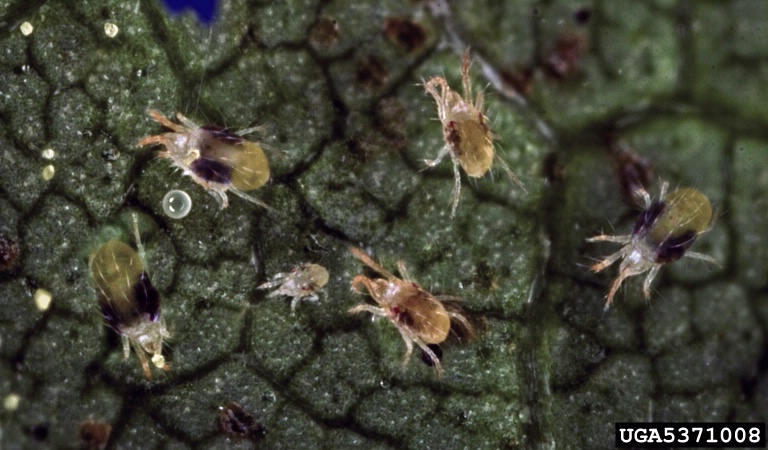 There are many web spinning spider mites. In Utah the 2-spotted and McDaniel spider mites are the most frequently encountered. Other mites commonly seen are the clover mite, banks grass mite, spruce spider mite, and European red mite. 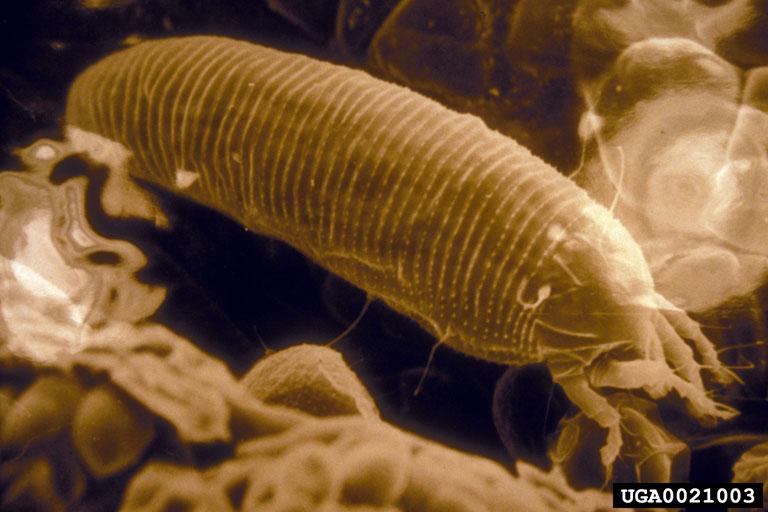 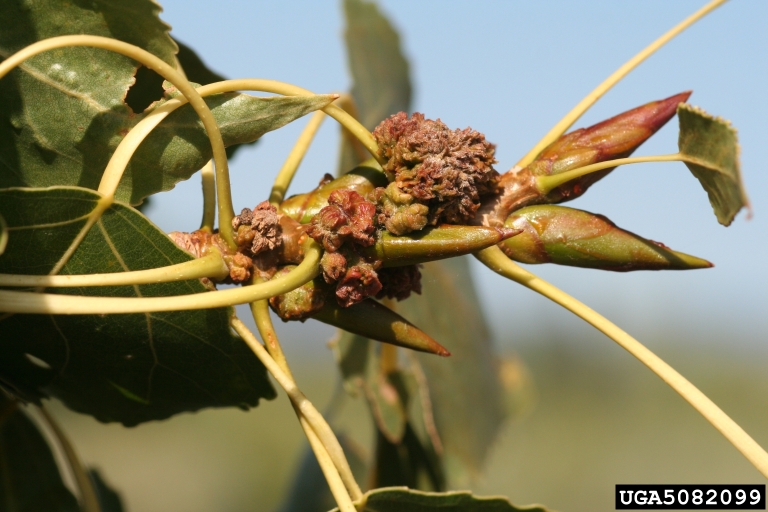 Eriophyid mites (1)  (Convovulus arvensis, Gall Mites) are microscopic mites responsible for deformities on many plants, including: finger and pouch galls, blister spots, rust spots, inflorescense galls, stem galls, and more. For more information and images of damage see the links on the right. 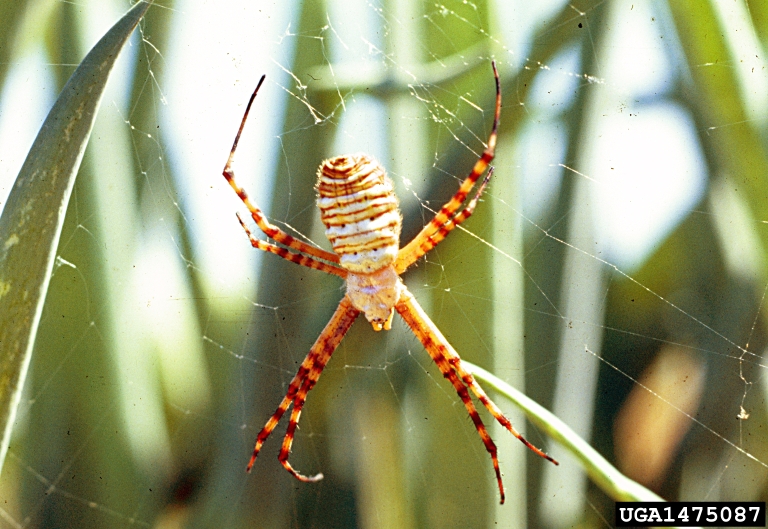 Araneus gemmoides Cat-Faced Spider (1) , Another common spider collected in the fall months. Cat-face spiders usually make geometric webs near outside lights to capture insects. They are not dangerous to humans.

Argiope trifasciata Banded Orb Weaving Spider (2), These spiders are commonly submitted for identification from August through October, or first freeze. The adult female wanders looking for a spot to lay the eggsac and may enter people's homes or areas around the home. The eggs will hatch in the spring. These spiders are an excellent predator of pest insects and should be released back into the yard. They are not dangerous to humans. 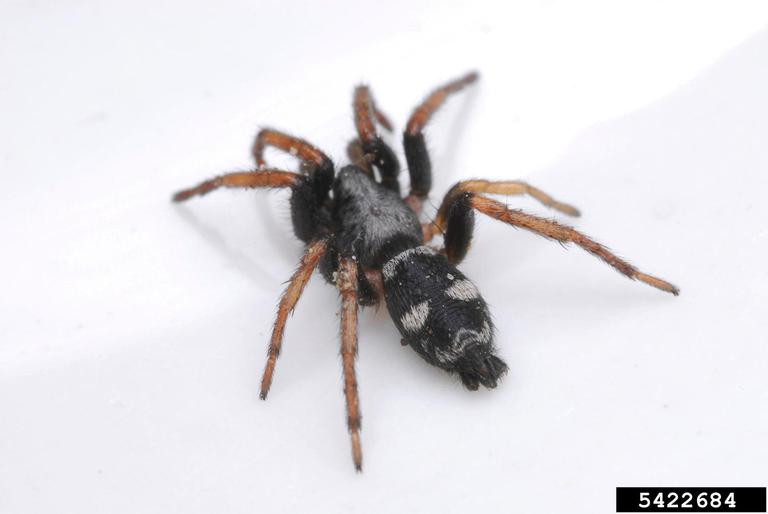 Ground spiders in the genus Drassodes are the most common Gnaphosids submitted to the UPPDL. They have a typical habit of other ground spiders and are not of medical concern.

Ground spiders are mostly nocturnal, ground-dwelling wandering hunters found in leaf litter, beneath rocks, and within and under decomposing wood. Silk is primarily used for making shelters and for enclosing egg sacs-not hunting. In the US ground spiders are not of medical concern. 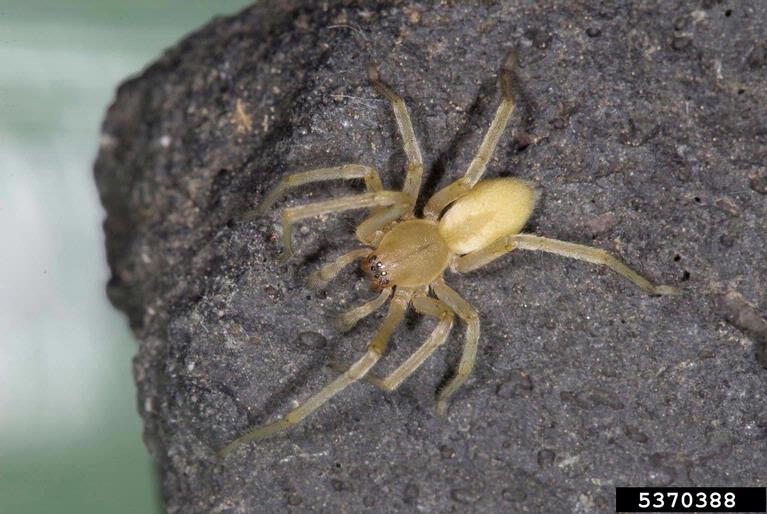 Cheiracanthium inclusum (1) The yellow sac spider is a common household spider in Utah. It can be seen walking on walls and ceilings. During the day it forms a small white silken retreat where the ceiling and walls meet, or in corners. The venom is not dangerous to humans, however the bite can be painful. Yellow sac spiders are more aggressive than most other house spiders and may bite multiple times if trapped inside clothes, or mishandled. Related species are common outside rolled up in rose leaves, etc., feasting on pest arthropods. 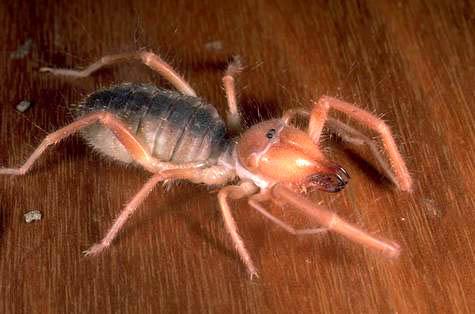 Camel spiders are common in southern Utah, but can be found to the northern extent of the state. These fast, nocturnal hunters do not have venom glands so they pose no serious threat to humans, however can give a painful bite. Camel spiders should be considered beneficial. In North America, Solfugids top out at about 3 inches. In Utah the common size is about 1.5 - 2 inches. 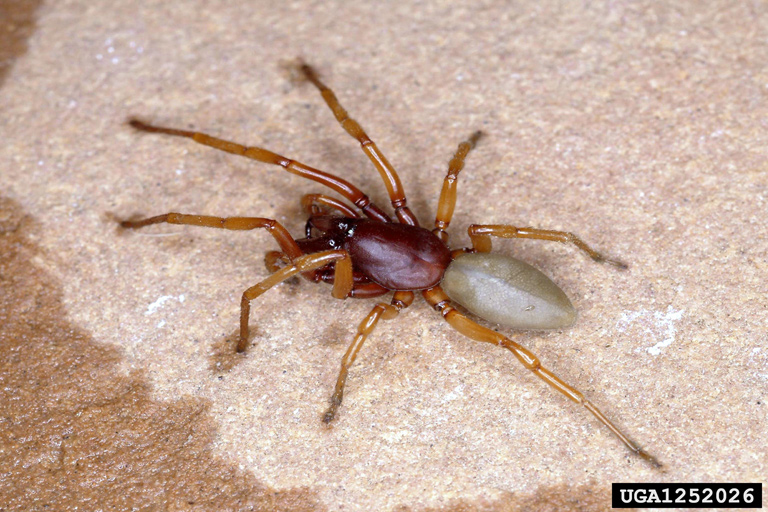 These red/tan and cream colored spiders are commonly submitted because of their fierce looking fangs and jaws sticking straight out from their head. Despite their appearance these are great spiders to have around the home controlling nuisance sowbugs/pillbugs, their main food source. They are not of medical significance. 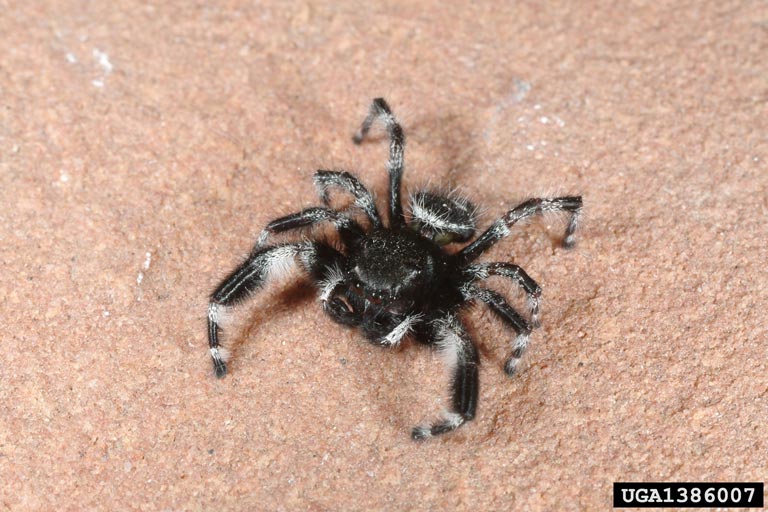 Phidippus audax (1) This jumping spider is one of the most common household spiders in Utah. Easily identified by its small size (.25" - .5"), stout hairy body, large front eyes, green mouth parts (chelicera), and erratic jumping/walking movements, this spider prefers to live near windows to take advantage of its superior eyesight. Jumping spiders are one of the most specious groups, and by far one of the most enjoyable to observe. 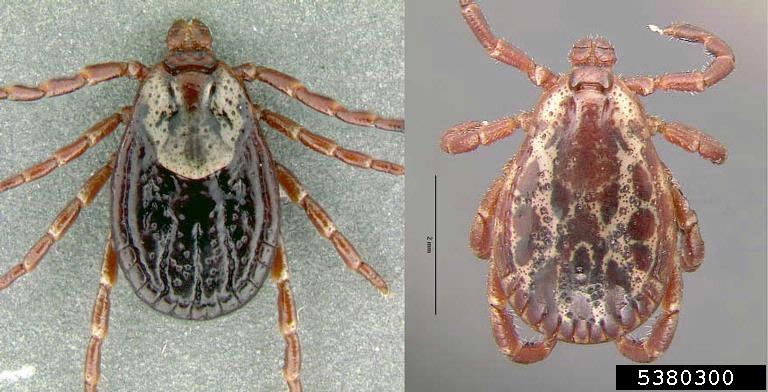 (1) This picture depicts the various engorgement stages of Rocky Mt. Wood Tick. Once the ticks are full of host blood, they will drop to the ground, digest the blood meal and molt (juveniles), or lay eggs (adult female).

Dermacentor andersoni (2)  Rocky Mt. Wood Tick is the most commonly encountered tick in Utah followed by American Dog Tick. It is most frequently encountered during wet spring and early summer conditions in the canyons and mountains of Utah. Dermacentor ticks carry numerous diseases including Colorado tick fever, Rocky Mt. spotted fever, Tularemia, and can cause tick paralysis. 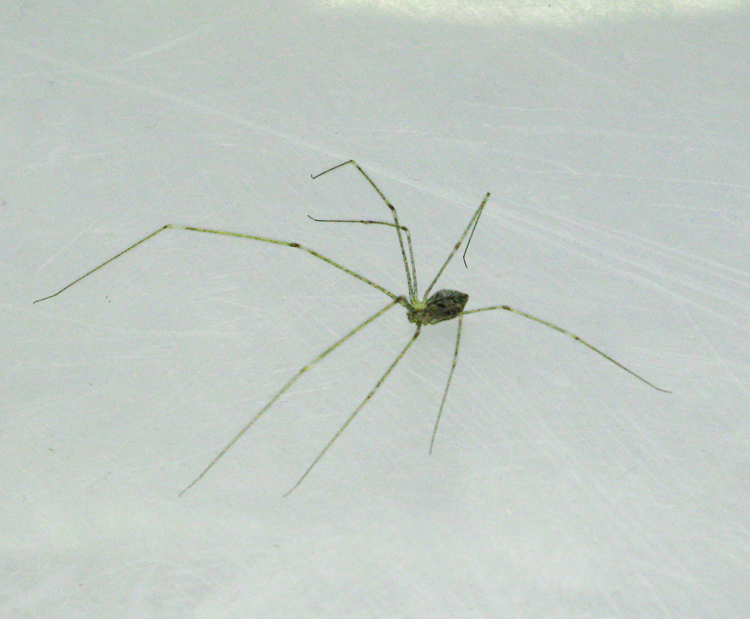 Pholcidae (1) Cellar spiders are named because of their habit of aggregating in dark, cool, and moist places--usually cellars. Their cobwebs can often be seen in the in the ceiling joists forming large mats. Having only 6 eyes and a "violin" pattern behind their eyes, these spiders can resemble brown [recluse] spiders to the untrained eye. Cellar spiders are not dangerous to people. 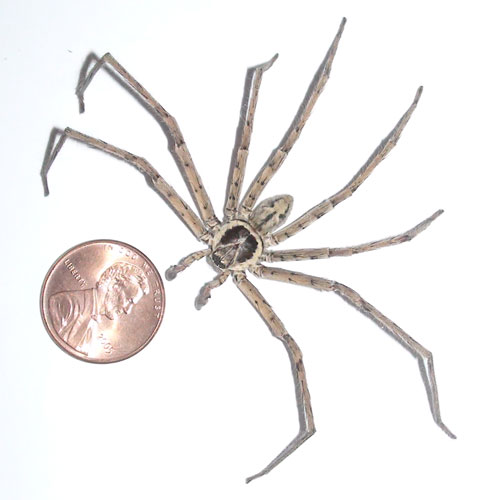 Olios fasciculatus (2) Golden Huntsman Submitted from around the state, this is the most common Huntsman spider identified by the UPPDL. These spiders are a beautiful gold color with black mouthparts and dense black hairs on the end of their legs giving the appearance of dark socks. These "socks" allow this spider to climb up any surface. They are commonly found under the bark of trees or in thin, secluded places. They occasionally come indoors; catch the spider in a jar and release outside. 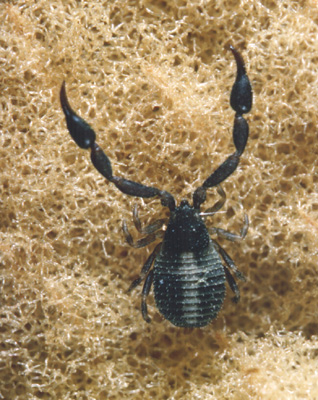 These small (.08 to .32 inch) scorpionlike creatures frequently live in leaf litter, under bark, and other habitats outside. Because they are so small, people rarely encounter these unless they accidentally come inside. They pose absolutely no threat to humans. They can be captured and released outside. There are no control recommendations for pseudoscorpions. 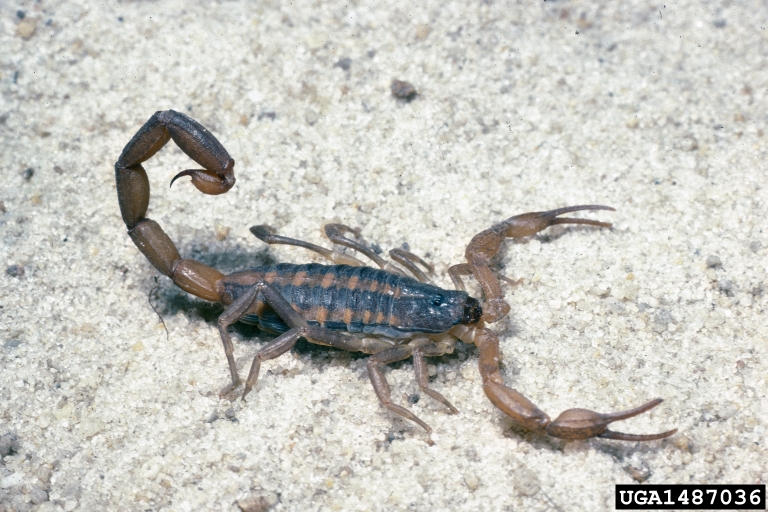 Scorpiones (1)  There are about 9 species of scorpions in Utah; only one, the Arizona bark scorpion (Centruroides scalpuratus), can cause fatalities in small childern, and older adults with compromised health. Stings from any scorpion can be painful and show signs of localized effects like bee stings. If you are stung, have the scorpion identified by the UPPDL to help doctors with their diagnosis. 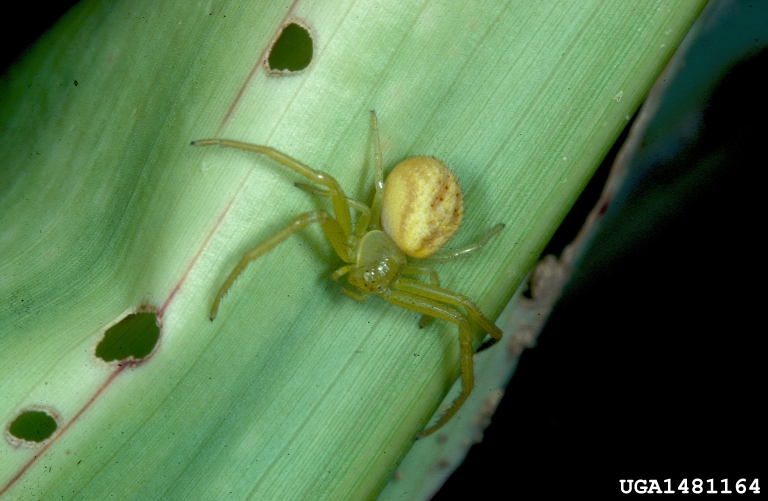 Thomisidae (1) Crab spiders are aptly named because of the crablike arrangement of their legs. These small spiders can be found everywhere in Utah, blending in with the plants on which they hunt or ambush prey. Some species can change colors depending on the color of flower on which they are hunting. Others can be found on tree bark, walking around in grass thatch, or inhabiting the smallest of habitats. They are not harmful to humans and should be considered beneficial. 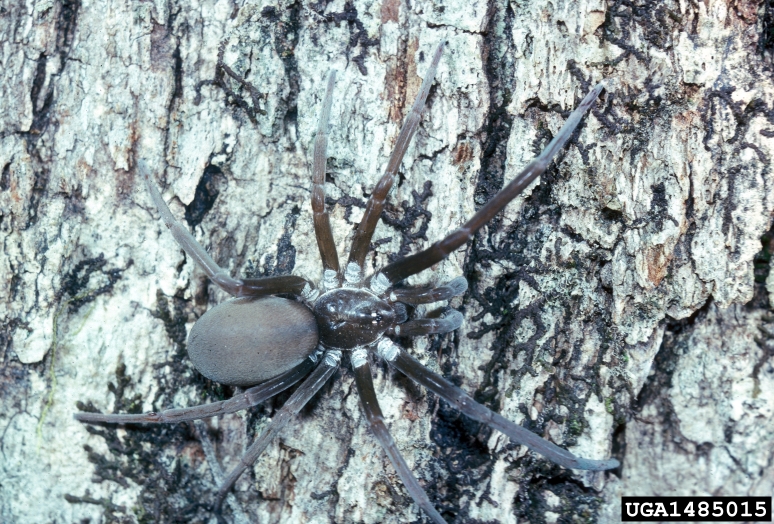 Crevice Weaving Spiders (1) These large, brown, 6-eyed spiders are often mistaken for brown recluse spiders, however brown recluse spiders do NOT occur in Utah. These are shy spiders that often make webs on the exterior of cracks in walls, porches, eaves, etc. They are most often submitted from southern UT counties. Filistatids are not harmful to humans. 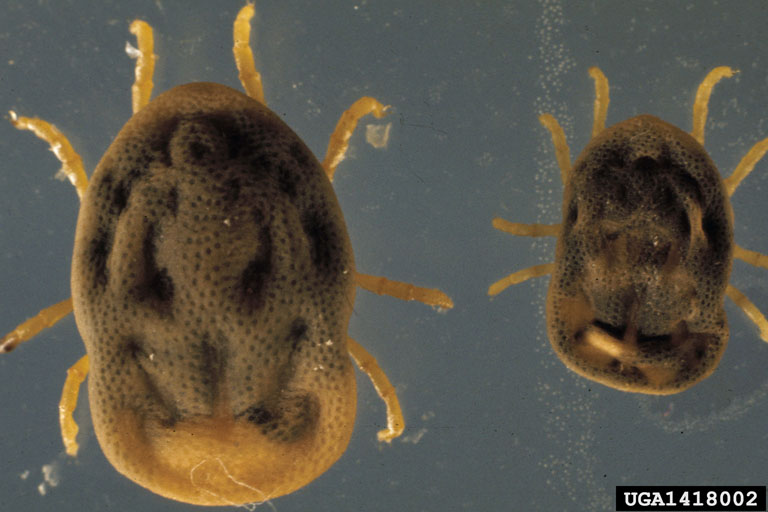 In Utah, the spinose ear tick (Otobius megnini) is the most frequently encountered soft tick, followed by fowl ticks in the genus Argas. Both genera prefer to attack animal and fowl hosts, respectively, but can feed secondarily on humans. Unlike hard ticks, soft ticks feed quickly and can feed multiple times on the same host. Soft ticks can survive for over a year without feeding. Neither genus transmits human pathogens.

Ornithodoros spp. (2) There are 5 species of Ornithodoros capable of transmitting relapsing fever in the western US. A few species, maybe all, occur in Utah, although none have been identified by the UPPDL. All 5 species have been recorded within the surrounding states (CO, ID, AZ, WY). 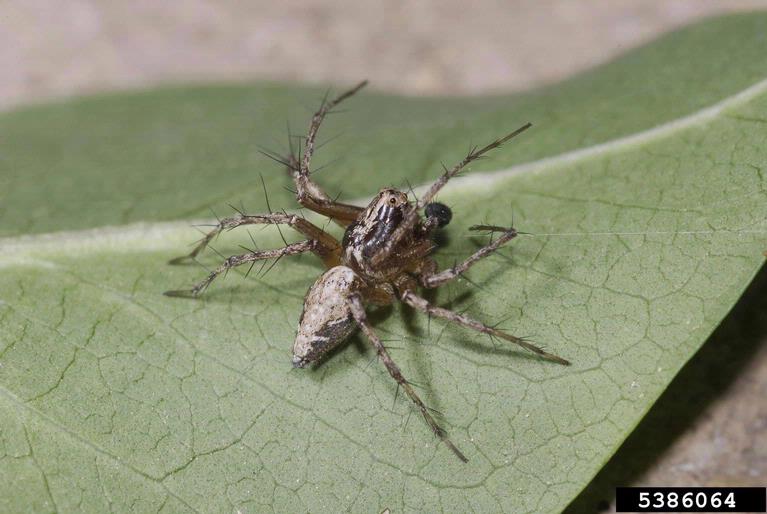 Most species of lynx spiders prefer to live in tall grasses and herbaceous vegetation, with a few inhabiting woody shrubs and trees. They employ both ambush and active hunting tactics to capture prey. They can be recognized by the long black spines on their legs. Lynx spiders are not of medical concern.