Mites are small arthropods that are more closely related to spiders and ticks than to insects. Mites in this group are web spinners, hence the name “spider” mites. They are an important and destructive group of pests to agricultural crops worldwide. However, the spider mite’s status as a pest is often created by poor pest management practices, such as broad spectrum pesticide applications and improper management of orchard ground covers. These practices shift the balance toward high spider mite densities and low natural enemy densities. During hot summer months, the spider mite’s high reproductive rate can cause population explosions in only 1 to 2 weeks. In addition, its small size makes detection, identification, and monitoring particularly difficult. Twospotted and McDaniel are the two most important web spinning species of spider mites (Order Acari, Family Tetranychidae) to attack Utah fruit orchards. However, twospotted spider mite tends to have a higher reproductive rate during hot summer conditions. For that reason,  when both species occur together, twospotted spider mite often out competes McDaniel spider mite. Although they are different species, their life histories, monitoring methods, and management techniques are similar enough to discuss together. 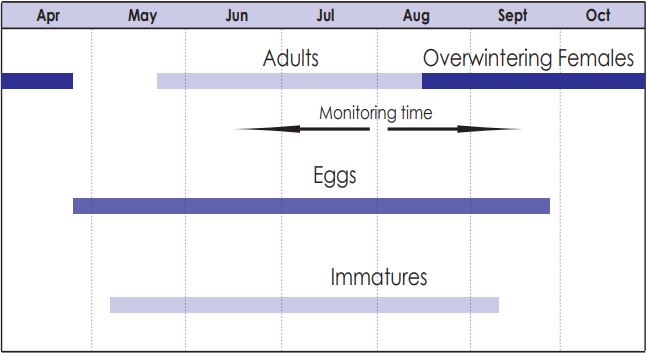 Mites primarily move from overwintering to feeding sites in the spring and among host plants by crawling. However, mites are able to “balloon” on air currents by holding onto a thin thread of silk (webbing) produced by their spinnerets, or without the aid of silk by just rearing up on their head or back and into the air.

Peak injury to trees typically occurs in late June through mid September when weather conditions are hot and dry. Mite infestations often begin as “hot spots” within an orchard that spread to neighboring trees if weather conditions are favorable and predatory mites are unable to suppress the infestation. The following are the common characteristics of mite feeding and injury:

In most situations, spider mites in Utah fruit orchards can be managed without the use of miticides. Some exceptions include mites on pear or on all tree types during extreme hot and dry periods when mites have a tendency to reproduce rapidly and reach outbreak levels within 1 to 2 weeks. Because biological and cultural controls play a dominant role in integrated mite management and because mite infestations often begin as “hot spots,” the use of a reliable sampling method is critical to the success of an integrated program. A fairly reliable and easy-to-use sampling method for mites is called presence-absence, or binomial, sampling. Rather than counting the number of mites on leaves, which is difficult because of their small size, presenceabsence sampling requires only that the scout determine whether or not pest or predator mites are present on each leaf sampled. The following are reasons to use presence-absence sampling:

Scouting for mites can be done at the same time as for western tentiform leafminer in apples and cherries. Select representative orchard blocks of each fruit type to include in the scouting program. Sampling all orchard blocks will improve your ability to make specific mite management recommendations.

Randomly select 10 trees scattered throughout a 2- to 5-acre block to sample. If the orchard block is larger than 5 acres, divide it into two 5 acre sub-blocks for sampling purposes.

Relying primarily on biological and cultural control for spider mite management should be the goal of every orchard pest manager. In many situations, chemical control is unnecessary and may only make the mite problem worse. Use of miticides will eliminate the beneficial predatory mites, which are capable of keeping spider mite populations below economically damaging levels. Another reason to avoid chemical control is that populations of twospotted and McDaniel spider mites have developed resistance to miticides. The following sections will describe the various components of a good mite management program.

Using the presence-absence sampling method the following are the steps to follow to determine if economic thresholds for spider mites have been exceeded (Jones 1990):

Mite Predators: The western predatory mite, Typhlodromus occidentalis (Family Phytoseiidae), is common and the most important mite predator in Utah fruit orchards. Several other species of predatory phytoseiid mites do occur, but their role in biological control of spider mites is usually minimal. The western predatory mite is teardrop-shaped (narrower at the head), translucent to yellow in color, and can move quickly. It primarily eats the eggs and immature stages of spider mites, but can be cannibalistic if spider mite prey is scarce. Zetzellia mali (Family Stigmaeidae), a smaller yellow to orange predatory mite, can often be found in unsprayed orchards or in those orchards that receive fewer insecticides. However, Z. mali predominantly attacks European red mite and apple rust mite. Other predators that feed on spider mites include a small black lady beetle, Stethorus picipes; some predatory bugs; thrips; and lacewings. But in Utah orchards, Typhlodromus occidentalis provides the most consistent and highest level of mite biological control. Zetzellia mali is a secondary predator, mostly of European red mite and rust mites, but will also feed on spider mite eggs. In order to encourage the survival of predatory mites in sufficient numbers, it is crucial to adopt sound, biologically based pest management practices.

The following are recommendations for encouraging predatory mites:

Avoid Nonselective Chemicals: To maintain adequate predator populations, chemicals that are toxic to beneficial predators should be avoided. If carbaryl (Sevin) is used for fruit thinning, use minimum registered dosages and confine the spray to the periphery of trees. Use post-bloom miticides only when absolutely necessary to prevent economic injury (see Treatment Thresholds above). Avoid using the following chemicals after bloom as they can significantly reduce predator numbers:

To successfully maintain predator mite populations in orchard trees and on ground cover vegetation, a prey source must be available. Rust mites on apple, pear, cherry, and plum play an important role as an alternate food source for predator mites in trees. Alternate prey can be critical in maintaining predators when spider mite densities are low. In fact, minimal spider mite numbers and moderate to high predator mite numbers have been observed in Utah orchards throughout the summer season because of the alternate rust mite prey. For that reason, rust mites should not be controlled on trees unless they are causing significant injury. Keep in mind that pear rust mites can cause substantial fruit russeting if populations are high enough. Therefore, their populations should be monitored carefully and considered in the overall mite management program.

The most important predator mite, Typhlodromus occidentalis, occurs naturally in Utah orchards. If Typhlodromus populations are eliminated through the use of nonselective chemicals (see list above), it may be possible to hasten their re-establishment rather than waiting for natural colonization. However, as long as nonselective chemical use is continued, Typholodromus populations will not thrive and provide mite control. To successfully re-establish Typhlodromus, a source of prey, such as rust mites or spider mites, must be available in the orchard. The following are some suggestions for re-establishing Typhlodromus in the orchard:

The type and density of vegetation growing on the orchard floor can play an important role in orchard mite management. Studies in Utah orchards found that certain broad leaf weeds and apple root suckers enhanced the movement of spider mites from ground cover plants into trees (see Table 1).

Establishing a healthy grass ground cover has proven successful in displacing most broad leaf weeds that serve as reproductive hosts for spider mites and preventing build up of problem spider mite densities. Because ground cover plants are an important source of food for spider mites in spring and early summer, they can also assist with building up predator mite populations that feed on the spider mites. Therefore, allowing a low level of weeds may improve the availability of early season spider mite prey for predator mites, and thus improve the synchrony of predator and prey as they move into trees later in the season. However, the availability of rust mites in trees as an enticement for predator mites to move into trees early in the season can prevent the need for early season spider mite populations on ground cover (see Important Role of Rust Mites). Keep in mind that aggressive weed and ground cover suppression should be maintained in orchards less than 3 years old to prevent competition for water and nutrients until the orchard is well established.

Ground cover management practices such as mowing, herbicide application, cultivation, and irrigation can also strongly influence the movement of mites. When there are abundant spider mites on ground vegetation, especially during mid-June to September, minimize mowing, cultivation, and herbicide treatments because large numbers of spider mites may be driven up into orchard trees. This can also occur when the ground cover dries out during the hot summer months. Adding a miticide to an herbicide for control of weeds and mites on the orchard floor is an expensive option that is not usually cost effective. In addition, if cultivation is used to reduce weeds on the orchard floor or a well-traveled dirt road is nearby, the dust produced may increase populations of spider mites and lower populations of predator mites.

Miticides and nonselective orchard chemicals should be avoided in favor of biological and cultural practices that allow predators to maintain spider mite populations below economically damaging levels. But if summer applications are required for control of twospotted or McDaniel spider mites, the following materials are recommended:

Use lower label rates if predators are present. To avoid selecting for resistance, rotate different types of miticides. Once a miticide is applied, mite densities should be monitored 1 week later. A second application may be required in 7 to 10 days following the first application if a large number of eggs and hatching larvae are present.