Spotted wing drosophila (SWD) (Drosophila suzukii) is a new fruit pest first introduced to the United States in 2008. SWD was detected in Davis County, Utah in 2010. SWD is similar to other vinegar flies (genus Drosophila), except they can infest unripe fruit. Males are easily identified by the single spot found on each wing (Fig. 1). Females are identified by the presence of a distinctly serrated ovipositor (egg laying structure), which may be difficult to see without the aid of a hand lens or microscope (Fig. 2)

Monitoring is a crucial first step for management of SWD. Suspected SWD caught in monitoring traps can be sent to the UPPDL for identification before applying an insecticide.

Spotted wing drosophila can attack fruit as soon as it begins to ripen, so that is when monitoring should begin. For example, place a trap in a cherry tree when the fruits begin to turn pink (Fig. 3). Continue trapping for at least two weeks after harvest. Because SWD can lay eggs in fruit on the ground, you will want to clean up as much fallen fruit as possible. As long as fruit is available, either on the tree or on the ground, monitoring is necessary, at least until temperatures consistently drop below freezing. The optimal number of traps has yet to be determined. Currently a minimum of one trap per residential yard or one trap per 5 acre commercial block is recommended. 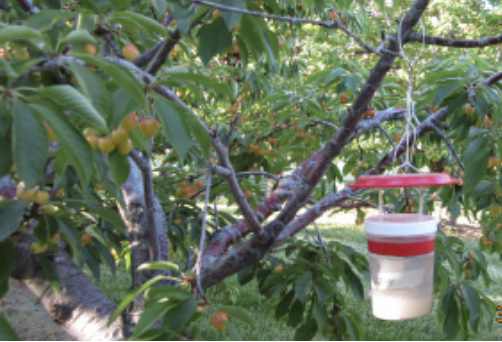 Fig. 3 SWD trap containing about 2” of lure, hung in a shady area within a cherry tree just as the fruit is beginning to ripen.

Traps are easily made. Homemade traps have been proven more effective than commercially available traps that are currently on the market.

SWD lure is a yeast/sugar solution that is easily made at home (Fig. 7). To make enough for 2-3 traps, mix:

Choose a shady spot in the middle of the tree canopy to hang the trap (Fig. 3). For low growing fruits or vegetables, you may need to hang the trap from a metal stake (e.g., raspberries) or sink the trap a few inches into the ground (e.g., strawberries).

To screen the old lure for SWD you will need a fine mesh strainer, a hand lens or magnifying glass, a bowl of water, forceps, a sink or waste container, and a good lighting source (Fig. 8).