Emerald ash borer (Order: Coleoptera: Family Buprestidae) (EAB) (Figs. 1-2) is an exotic, invasive wood-boring insect that specializes on true ash species (Fraxinus spp.). EAB is native to parts of China, Korea, Japan, Taiwan, and small areas of Russia and Mongolia. EAB was first discovered in North America in June 2002 near Detroit, Michigan and Windsor, Ontario, and is thought to have arrived to North America via infested wood packing material. Evidence suggests that EAB is generally established in an area for several years before it is detected. Since arriving in North America, EAB has been found in more than 20 mid-western and eastern states, killing tens of millions of ash trees. In September of 2013, EAB was found in Boulder, Colorado, and is now on Utah’s front door. If EAB were to become introduced and established in Utah, it poses a serious threat to the state’s ash trees.

EAB undergoes complete metamorphosis, with four distinct life-stages: a feeding adult, an egg, a feeding larva, and a non-feeding pupa.

Adults are small (about 1/2 inch long and 1/8 inch wide), metallic green-colored beetles with a bronze head, a flattened body, and an iridescent purple abdomen hidden beneath their forewings (Figs. 1-2). Males and females are similar in appearance.

Eggs are very small (< 1/16 inch) and nearly impossible to locate on bark or in bark crevices where they are deposited. Newly deposited eggs are cream-colored, but turn reddish-brown as they develop (Fig. 3).

Larvae are cream-colored with 10 abdominal segments and a flattened abdomen. Larvae reach a length of about 1 inch, are tapeworm-like in appearance, and have a pair of brown, pincer-like appendages on the last abdominal segment (Fig. 3). As larvae mature, they excavate a tiny chamber and curve back on themselves (forming a J-shape).

Pupae are initially creamy white, but their body begins to darken as they develop (Fig. 3).

Be aware that other beetles, including other wood-boring beetles, may look very similar to EAB (Fig. 4). Suspected specimens should be sent to Utah State University’s Plant Pest Diagnostic Lab for identification.

In North America, EAB completes its life cycle in 1-2 years, depending upon the local environment (EAB develops more slowly in cold climates with short growing seasons).EAB spends the winter as a larva or pre-pupa within ash trees, pupating in the spring, and adults begin emerging when degree-day (DD) accumulations reach 450-550 DD (using a base temperature of 50°F), which can occur as early as mid-April in southern Utah or mid-May in northern Utah (visit Utah TRAPS for DD information). Adults typically live 3-6 weeks and will feed on ash leaves for 1-2 weeks before searching for mates. Adult feeding causes little damage.

On average, females can produce 30-60 eggs during the course of their lifetime. Eggs may be laid in groups or individually. After the eggs hatch (2-3 weeks later), the larvae bore into the phloem and cambium layers of the tree, and then pass through four stages before overwintering.

Early infestations are difficult to detect since EAB adults usually infest tree crowns before working their way down the tree. Signs and symptoms of EAB include bark splits, thinning or dieback of the tree’s canopy (Fig. 5), increased woodpecker feeding, and sucker shoots (known as epicormic growth) at the tree’s base or at the base of large, dead branches (Fig. 6). In addition, EAB adults leave behind distinctive D-shaped exit holes (1/8 inch wide) when they emerge from trees in the spring (Fig 7), and when the larvae chew through the bark, they create serpentine shaped, excrement-filled channels that may be seen by peeling the bark away from the tree (Fig. 8).

EAB only attacks true ash (Fraxinus) species, including all white (F. americana), green (F. pennsylvanica), and black (F. nigra) ash. Mountain ash (Sorbus) is not a true ash species and will not be affected by EAB. Both healthy and unhealthy trees can be attacked. Some characteristics for identifying ash trees include:

EAB has NOT been detected in Utah, so there is no current need for control of this insect. If EAB should become established in Utah, control can be achieved using registered insecticides. However, insecticides are not always 100% effective due the inherent difficulty of managing insects under tree bark. Currently, infested trees may be recovered by treatment if greater than half of the canopy is still living. Trees with greater than 50% crown dieback have a small chance for survival. Infested trees treated with a systemic insecticide may take a year or more to show improvement in overall tree health.

There are a few ways to apply insecticide products, including soil/root drenches, trunk injections, and bark and foliage sprays, but the choice of product needs to match the appropriate application method (Table 1). For homeowners, a soil drench of systemic insecticides is the best choice, but efficacy can be variable and depends on tree size (more effective on smaller trees) and beetle pressure. Cover sprays applied to the foliage and bark are ideal for EAB prevention. 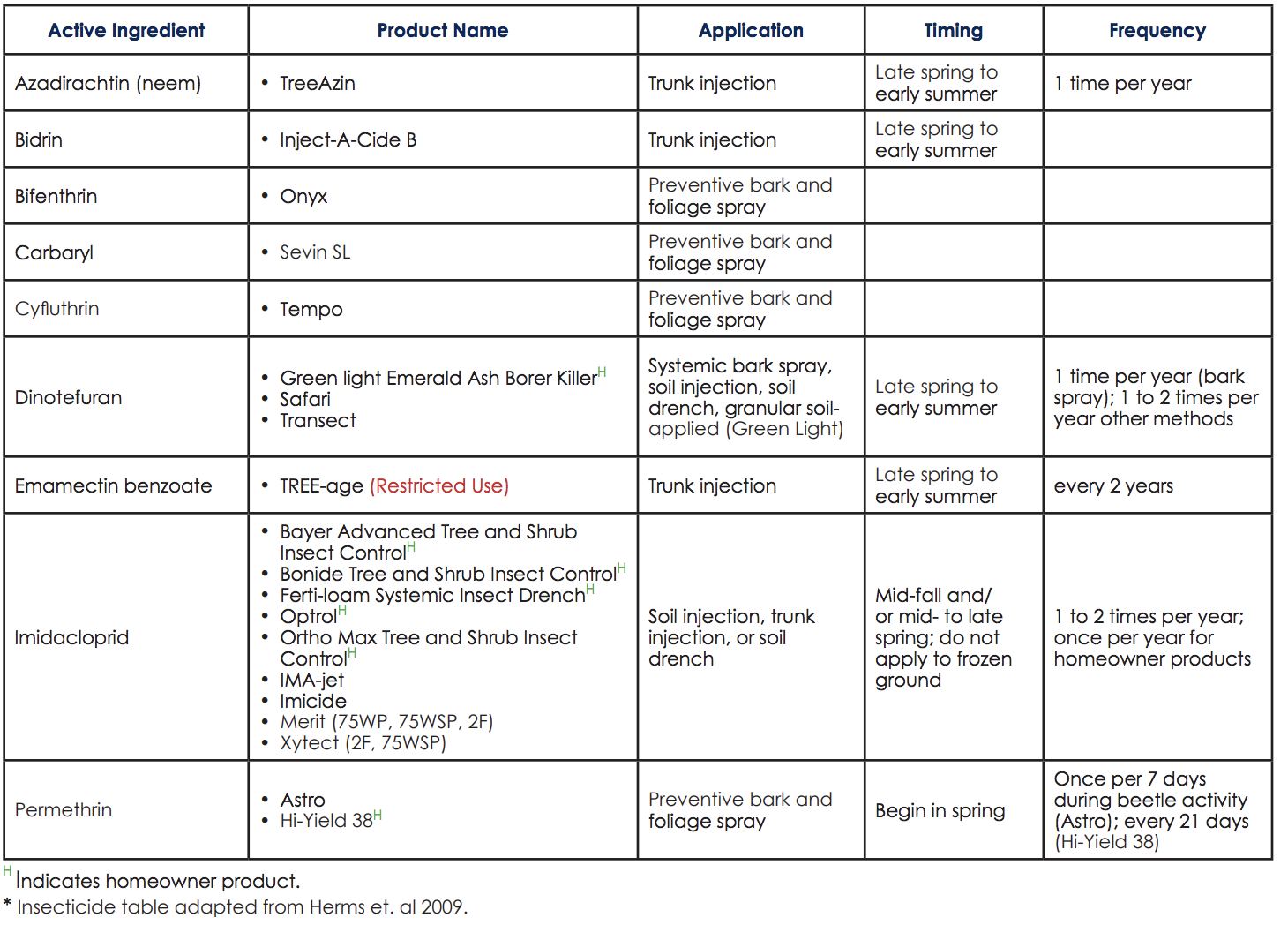 Help Stop the Spread of EAB

EAB is primarily spread by movement of infested wood. You can help stop the spread of EAB by not transporting firewood and by burning wood where you buy it. If you have ash trees in your yard, please check them periodically for signs of EAB infestation.