In July 2014, the Utah Plant Pest Diagnostic Lab and USDA APHIS confirmed the first reported occurrence of elm seed bug (Lygaeidae: Arocatus melanocephalus) in the state of Utah (Fig. 1). A native of Europe, the elm seed bug was first identified in the U.S. in Idaho in 2012. It has since been found in Oregon, Washington, British Columbia, Canada and in various locations throughout Asia and Europe. While Utah’s first submission originated from Salt Lake County, elm seed bug is now widely distributed along the Wasatch Front and Cache Co., and has been reported west to Duchesne Co., east to Tooele Co. and south to Grand Co.

As a member of the seed bug family (Lygaeidae), this insect feeds primarily on elm seeds, but has also been reported on linden and oak. In Utah and Idaho, it has also been observed feeding on elm leaves. In Utah, as in other locations, this insect has become a major nuisance pest, entering homes and buildings in great numbers, similar to the boxelder bug. Unlike boxelder bug, however, peak nuisance activity occurs from mid-June through August and elm seed bugs can emit a pungent odor from scent glands, similar to bitter almonds.

Adults are about 1/3 inch long with dark, rusty-red and black coloration. On the back, there is an upside-down black triangle set inside two rusty-red triangles (Figs. 2a and 2b). Wings are held crossed over the back. Half of the wing is membranous and black while the other half is leathery and red and black. Next to end of the wing, there are noticeable white dots interspersed with rusty-red and black dots (Fig. 2a). The “belly” of the insect, when laying on its back, is red (Fig. 2c - far left side). 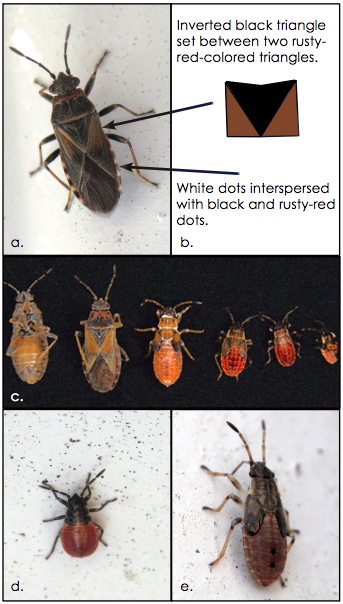 Elm seed bugs overwinter as adults in and around structures. They begin moving from overwintering sites to host trees in early spring. Egg laying begins around the time of elm flower bloom. Eggs are initially laid on the elm flower cup. Other egg-laying sites on elm have not been reported, but it is likely that eggs are laid in other locations on elm hosts. Immatures (nymphs) begin hatching from eggs in May and continue hatching into June. Eggs are laid for an extended period, so many life stages (adults, young and old nymphs) may be present in June and July.

Nymphs progress through 5 growth stages before transforming into winged adults. Between each stage, nymphs molt and leave behind a shed skin (Fig. 3). Adults begin to appear by mid-to-late June in northern Utah (mid-May to early-June in southern UT) and will be present through the fall, into the following spring. There is one generation per year.

Elm seed bugs feed on elm seeds and leaves. They have piercing-sucking mouthparts and do not chew on leaves. Damage to host trees is negligible. They are primarily known as a nuisance pest around the world, because they invade homes and structures in large numbers. Elm seed bugs leave unsightly fecal spots behind when crawling around on structures (Fig. 4), and when present in large numbers indoors will land and crawl on people. Elm seed bugs do not pose a human health threat.

This information on habits is based on personal observation and has not been scientifically evaluated. Upon egg hatch, early instar nymphs feed on elm seeds. After elm seeds drop from the tree, nymphs become mobile and may be found crawling in large numbers on the trunk, ground, and in and on structures. Most activity is seen on the north and shaded sides of structures, but activity may occur on all sides if host trees are nearby. Some nymphs remain on the host tree, feeding on leaves and taking refuge in shaded areas. Adult elm seed bugs that remain on host trees appear to aggregate together in areas where leaves overlap, or are dense, to escape the sun and heat (Figs. 1, 5 & 6). Once adults are present, they fly or crawl to nearby structures where they attempt to enter.

Elm seed bugs enter structures through cracks and crevices, but most commonly through windows and doors. Any gap in weather stripping in a window or door will allow elm seed bugs to gain access. This is particularly true of common sliding windows; where the top and bottom rails of the windows meet there are two small gaps on either side which allow easy entry (Fig. 7). However, reports indicate that elm seed bugs can even enter between the glass and frame of picture windows. Indoors, elm seed bugs alarm and annoy occupants. They can be found crawling on the ceiling, walls, window sills, furniture or behind wall hangings, or in other hidden places. Elm seed bugs that are crushed or mishandled can give off a foul odor.

Elm seed bugs are a major nuisance pest and efforts should be made to exclude them from entering the home. Exclusion and other non-chemical tactics include:

Little research has been conducted on the chemical management of elm seed bug. In Italy, etofenprox (Group 3A, pyrethroid) was found to be the most effective active ingredient for managing elm seed bugs, but few chemicals have been evaluated.

Chemical management of elm seed bugs can be focused on killing nymphs in trees or perimeter barrier applications to prevent elm seed bugs from entering the home. To target nymphs in trees, apply an appropriately labeled pyrethroid insecticide to elm foliage when monitoring indicates their presence. Targeting young nymphs will improve efficacy. Thorough coverage of large trees and complete control may be difficult to achieve.

To reduce elm seed bug entry, apply a perimeter barrier treatment around structure foundations, windows, doors, vents, under roof overhangs and in cracks and crevices using an appropriately labeled pyrethroid insecticide. Products commonly sold for this use contain active ingredients such as beta-cyfluthrin, bifenthrin, deltamethrin, cyfluthrin, cypermethrin, lambda-cyhalothrin and permethrin. Only use products that explicitly allow for the above-mentioned application sites if intended for use on a structure. Application of pesticides may not stop entry of elm seed bugs into a structure, but delayed death may occur once inside. Consider using or recommending meticulous exclusion techniques in addition to, or in place of, pesticide applications. Carefully read and follow the pesticide label.