Mating disruption as a method to manage orchard pests became commercially available in the early 1990s, and was adopted by many Utah growers about a decade later. Use of this pest management technology can be daunting due to high up-front costs and monitoring requirements; however, after two to three seasons of use, the cost of mating disruption is the same or even less than conventional pest management. It is a viable and important alternative for larger-acreage apple or pear orchardists for managing codling moth. (For more about codling moth description and biology, see the USU Codling Moth Fact Sheet.)

Like many moth species, the female codling moth emits a species-specific pheromone (called codlemone), which attracts male moths for mating. Males easily follow the pheromone “plume” directly to the female. When an orchard is saturated with synthetic codlemone, mating is “disrupted” as the males are limited in their ability to find females. 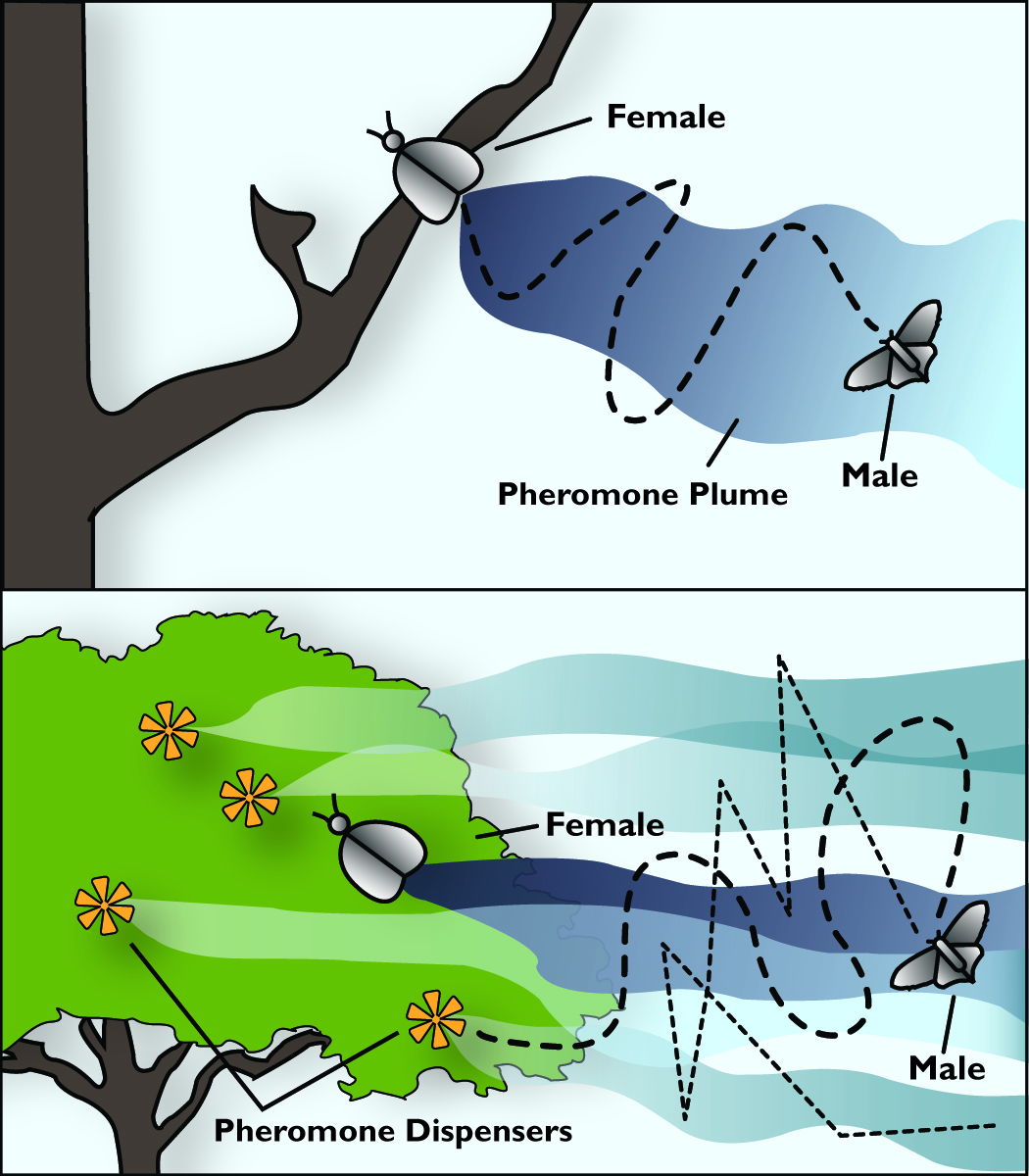 In nature, female moths emit chemical cues (pheromone) to attract males for mating. The pheromone is distributed in a “plume” that male moths use to find their mates (top). In orchards with mating disruption, female moth plumes are mixed with the synthetic pheromone plumes emitting from the dispensers. As a result, the ability of male moths to find females is inhibited (bottom). The male may either fly randomly and not find a female at all (thin dotted line) or may find a female or follow a false trail (thick dotted line). The idea is that mating is either prevented, or delayed long enough so that it is unsuccessful.

Two theories have been proposed to explain how mating disruption delays or prevents mating (Miller 2010, Miller and Gut 2015; see graphic, above):

Entomologists at Michigan State University (MSU) suggest that the primary mechanism is competitive attraction. In their research, they repeatedly saw male moths approach pheromone dispensers, reducing their success of locating female mates (Miller and Gut 2015). The MSU research also showed a secondary response where males were unable to follow any pheromone plume due to sensory overload. They found that the males recovered the next day after flying out of the saturated orchard. The end result of these two mechanisms is that mating is substantially delayed.

A female that has not mated after three days has half the number of viable eggs (Mori and Evenden 2013). As a result, mating disruption alone is not a successful pest control strategy in orchards with high moth populations. Chance encounters and mating are known to occur under mating disruption where pest pressure is high.

The good news is that, farms that use mating disruption for several seasons have found that the codling moth population declines, and mating and fruit injury are prevented or reduced.

Who Can Use Mating Disruption

Before using mating disruption, be sure you have the time and resources for a proper monitoring program, and a source of information (consultant, agriculture company representative, Extension) when questions arise.

Growers in Utah have used a variety of dispenser application types. Rates of hand-applied dispensers vary with the product, most are 200-400 per acre; the highload (meso) dispenser is applied at 18-36 per acre, and aerosol dispensers are placed at 1-2 canisters per acre.There is one generation per year; however, adults can emerge from the soil over a period of 3 months or more. Cherry fruits are susceptible to infestation from when they first ripen to a salmon-blush color until they become too soft or fall from the tree.

To be effective, each hand-applied mating disruption dispenser should release a small amount of pheromone over approximately 140 days. Research at USU (2009) compared the pheromone release rate of each of several dispensers (Table 1) and found that they were all releasing pheromone after 140 days in the test orchard; however, there were notable differences between the products (see below). 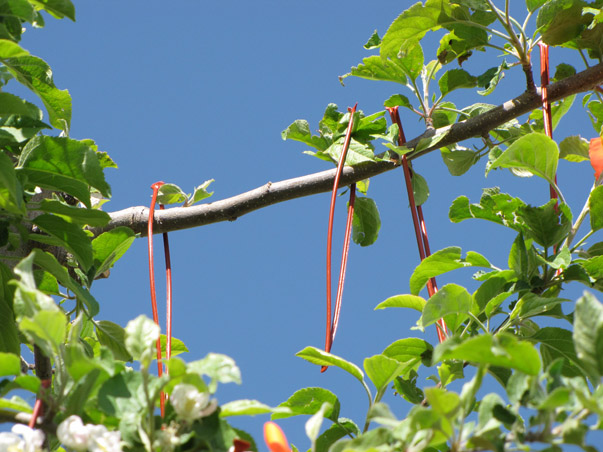 Isomate-CM Flex and CTT are polyethylene “twin tubes” (TT) that contain single or double the volume of pheromone, respectively, and are applied at varying rates. 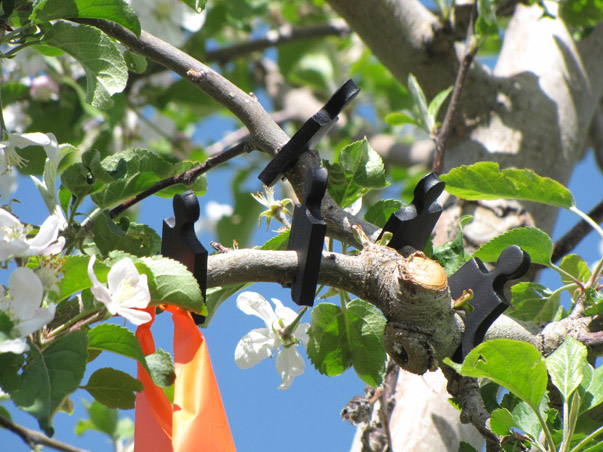 Cidetrak CM Puzzle Piece is a clip-on dispenser that packages the pheromone in an internal and external shell that is said to prevent oxidation. 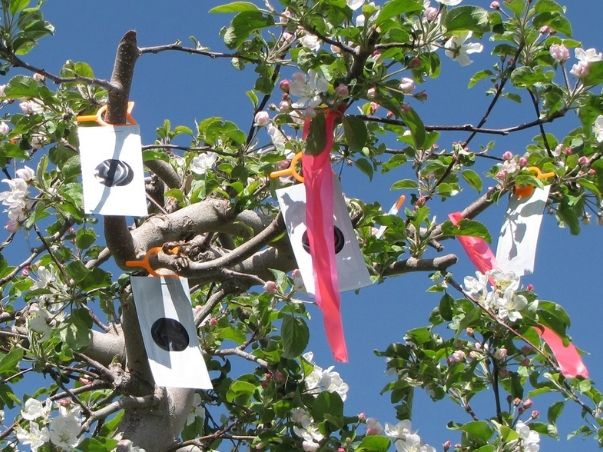 NOTE: Dispensers in the images above are shown clustered on branches for demonstration, but should be hung according to the directions for actual applications.

Table 1. Characteristics of some moth mating disruption options. The average cost per acre is similar for all, around $110/acre.

The product options listed above are not comprehensive, and not an endorsement of one product over another. 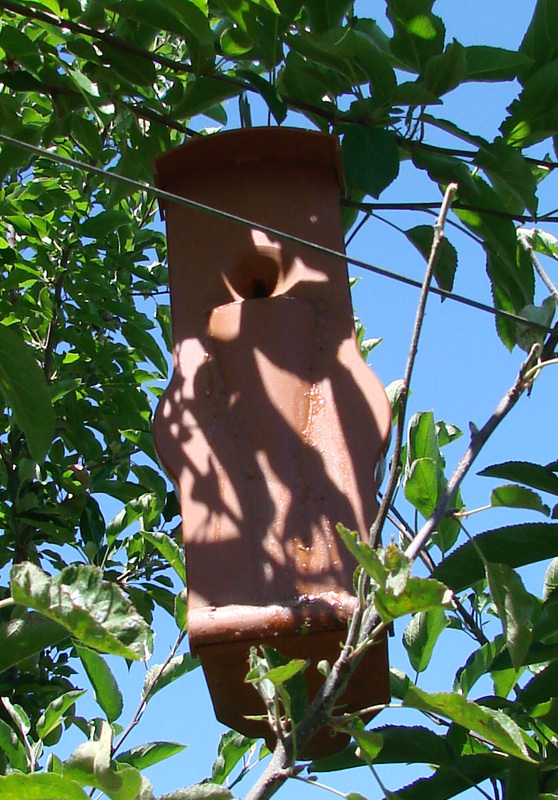 Two aerosol dispenser brands are available, Checkmate Puffer (Suterra, shown at right) and Isomate CM Mist (Pacific Biocontrol). The aerosol devices release a small spray of pheromone every 10 to 15 minutes starting at dusk. The aerosol canister is housed in a reusable cabinet that controls the spray. One canister lasts approximately 200 days.

Other Types of Dispensers 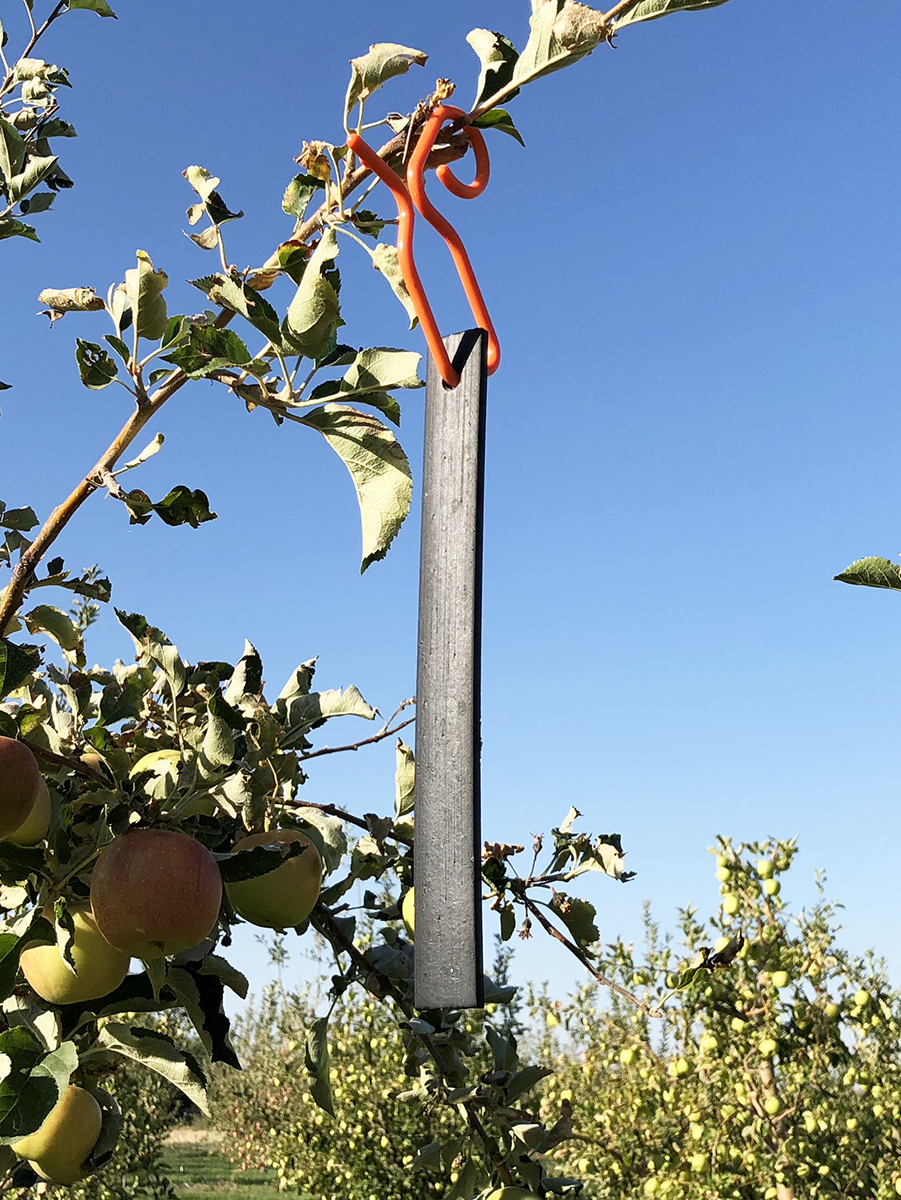 High-load dispensers are similar in appearance to the high-rate hand-applied dispensers, but are loaded with almost ten times the pheromone, covering a larger area. They are applied at 10 or more per acre, usually with an easy application system to save time. One brand, Trécé Cidetrak MESO (shown at right), was tested in a single Utah orchard at a rate of 27 dispensers per acre. The dispensers were effective in shutting down trap catch, but because the orchard was near a residential setting with backyard trees, the fruit injury was high (due to female moths mating outside the orchard and entering the orchard to lay eggs). Therefore, these types of dispensers are recommended for large orchards (10 acres or more, that are not influenced by backyard or unmanaged trees.

Sprayable pheromones are microencapsulated in a polymer capsule which adheres to the crop canopy and controls the pheromone release rate. Some sprayable formulations are applied with specialized equipment, but workers can move quickly through the orchards. These have not been tested in Utah.

Whichever product you choose, mating disruption dispensers should be placed in the orchard at or shortly before biofix (first male flight) to prevent/delay mating. Ideally, a biofix for each orchard should be determined either by the trap-method using a nearby apple or pear tree not affected by mating disruption or by using the site-specific fixed biofix method. (For more information, see the fact sheet, “An Alternate Codling Moth Biofix.”).

Product labels will instruct on dispenser placement in the orchard, but in general:

Monitoring codling moth populations using pheromone traps is essential to determine pest pressure and the need for supplemental insecticide. Specialized codling moth lures must be used because the high concentration of pheromone in disrupted orchards masks traps with the standard lures. The recommended monitoring lure is a high-load codlemone lure with an attractant, called the CM DA-Combo lure. The attractant is called pear ester, a chemical extracted from ripe pears to attract both male and female codling moths. USU compared the lures to the standard 10X lure in apple orchards in Utah County in 2006-2009, and developed a thresholds for the lure.

The Utah study found that action thresholds for the DA-Combo lure were the most accurate in predicting apple fruit injury and the need for supplemental insecticide treatments. Use of both total moth and female moth thresholds combined resulted in only one false prediction for the full season in 20 apple orchards in a 2009 validation study (Table 2). The DA lure thresholds were too low, and resulted in numerous false positive predictions (recommended treatment when it wasn’t necessary). For the 10X lure, the relationship between fruit injury and trap catch was inconsistent at higher moth densities. The DA-Combo thresholds in Table 2 are recommended for use in disrupted orchards. 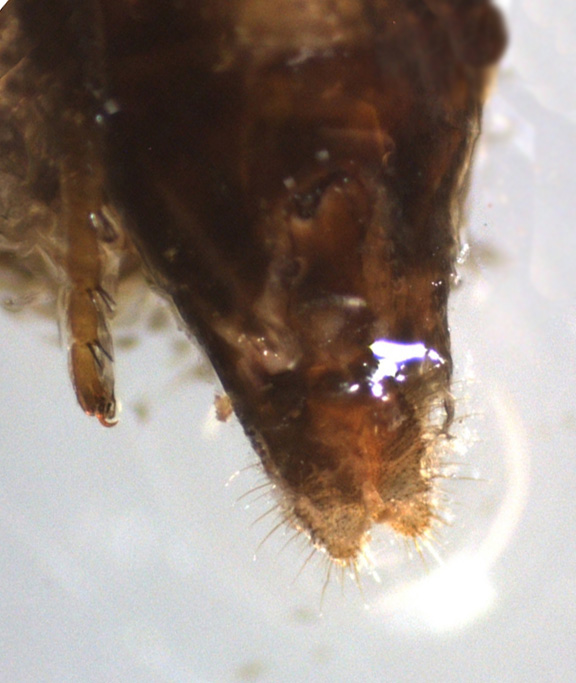 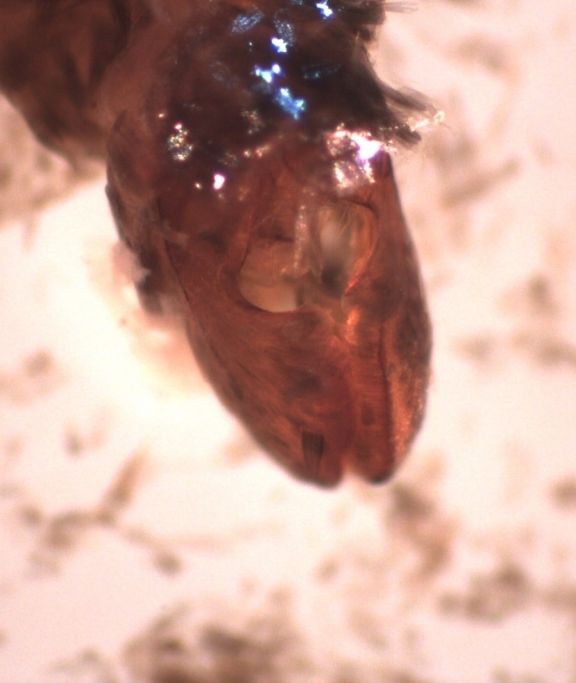 Mating disruption is a highly effective, organic, method to lower codling moth populations, prevent injury, and reduce insecticide use. It is only appropriate for use in contiguous apple and/or pear blocks of 10 acres or more. Mating disruption needs to be applied just before or at biofix (first consistent moth activity) for full effectiveness. The method does not kill moths, but prevents or delays mating. There are a number of pheromone disruption products available. Hand-applied dispensers have been used the most in Utah. It is critical to prevent high populations of codling moth from building up in a disrupted orchard; otherwise, fruit injury is likely to occur.