The brown marmorated stink bug (BMSB, Halyomorpha halys Stål) (Fig. 1) is an invasive agricultural and nuisance pest native to eastern Asia. It was first confirmed in the U.S. in Allentown, PA, in 1996 and has since spread to 44 U.S. states, many of which have now experienced economic crop damage from this pest (Fig. 2). In Utah, BMSB is now established in five counties (Box Elder, Weber, Davis, Salt Lake and Utah), and has been detected in Cache and Kane counties. While crop damage to peach, apple, squash, and popcorn has been identified, it is currently causing mostly nuisance problems due to overwintering bugs on and inside human structures.

There are at least two families of stink bug parasitoids in Utah, Eupelmidae and Scelionidae. These are small, typically black wasps that may be mistaken for small gnats or ants. They will fly in search of stink bug egg masses. Once they find the eggs, they will sting them, depositing one of their own eggs into the stink bug egg. The wasp egg will hatch, and the larva wasp will feed and develop within the stink bug egg, effectively killing the host. The adult wasp will emerge a couple of weeks later.

The Eupelmids attacking BMSB are all generalist parasitoids, meaning that they sting the eggs of a wide variety of insects. Native parasitoids in this group are moderately successful at stinging and developing inside BMSB eggs, but are unlikely to control BMSB populations due to their generalist nature.

The second family, Scelionidae, includes some stink bug specialists, meaning they only sting stink bug eggs. Specialists are more promising as a control agent for BMSB. Although many of the native Scelionid species will sting BMSB eggs, some will not develop into an adult and emerge. Those that can complete development within BMSB eggs have the potential to be more effective control agents.

Stink bug eggs are usually bright in color (Fig. 3) and take 5 to 7 days to develop and hatch. Eggs will develop a triangular egg “burster” shortly before stink bugs emerge from the egg (Fig. 4). However, if parasitized by a wasp, the eggs will turn dark brown or black after about a week. As the wasps develop, the eggs will continue to darken until the adult wasps emerge about 14 days later (Fig. 3).

There is usually a skewed sex ratio in emerging wasps. In a typical stink bug egg mass that consists of 14-28 eggs, one to three wasps will be male, and the rest will be female. Male wasps will emerge first and wait for the females to emerge. Once mated, the females fly off in search of new egg masses to sting. 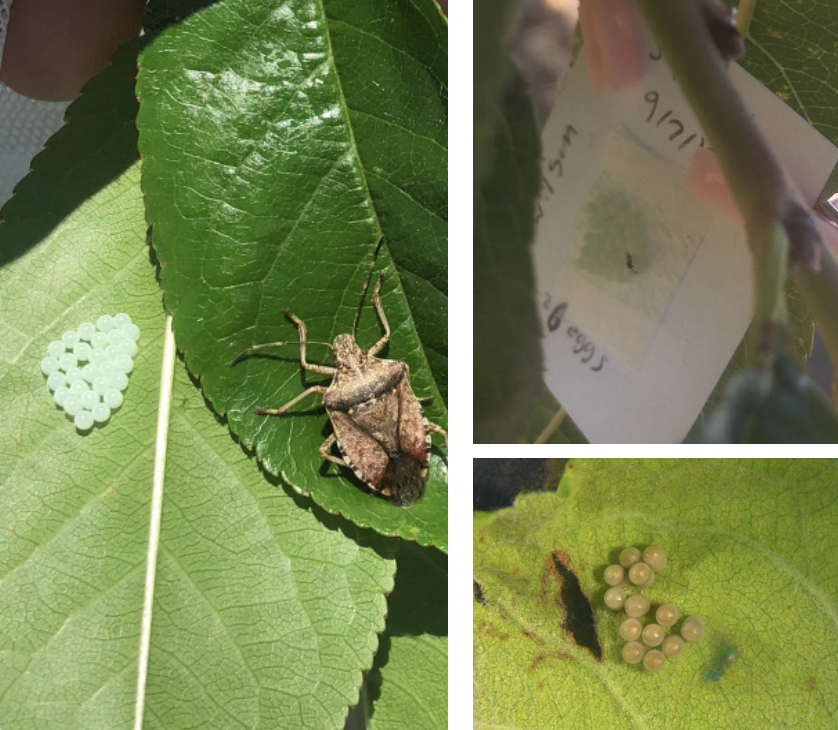 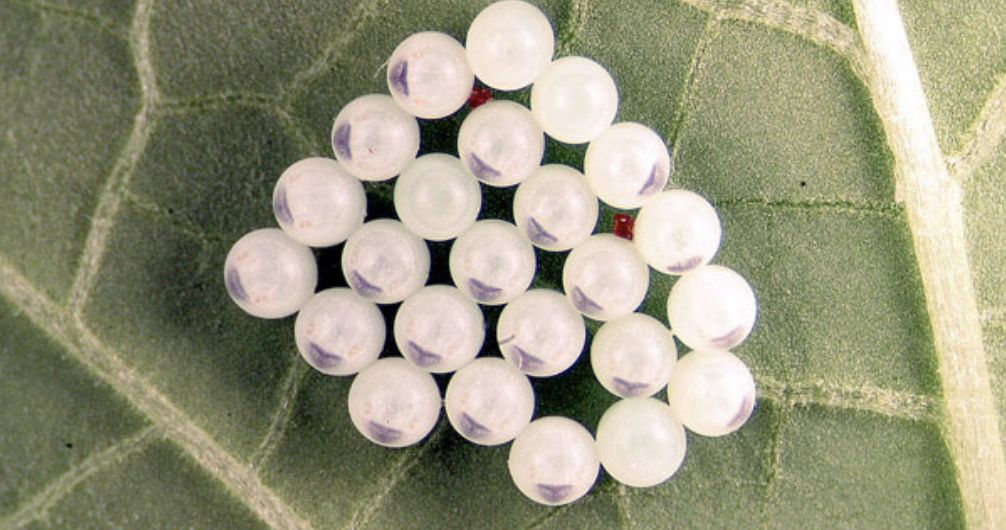 Fig. 4. A BMSB egg mass with triangular egg bursters. The nymphal stink bugs inside are close to hatching.

Eupelmids are small (3-5 mm), slender wasps that are generalist egg parasitoids. One genus, Anastatus, will parasitize BMSB, as well as other stink bugs and insects. They can resemble ants at first glance. Females often have a white band or white triangles on the wings. There are three species of Anastatus known to attack BMSB in Utah (Table 1). When seen on a stink bug egg mass, a general rule is that these wasps are much larger than an individual egg (Fig. 5). Females (Fig. 6) are typically larger than males, and under direct light can exhibit brown, green, or blue iridescence. Males are typically all black, smaller (< 4 mm), and lack wing patterns, making males indistinguishable to species without a microscope.

Scelionids are very small (1-2 mm), but often robust wasps that are specialists on different insect groups (Fig. 7). One genus within this family, Trissolcus, only stings stink bug eggs. The wasps attacking BMSB can only be identified to species by using microscopes, as they are entirely black, small, and lack wing patterns or other characteristics to separate them with the naked eye. However, they can be generally identified in the field to family or genus using the tool that they are as small as or smaller than a stink bug egg (Fig. 8). There are at least two genera of stink bug parasitoids in the family Scelionidae in Utah (Trissolcus and Telenomus), with at least eight different species between these two genera (Table 1).

Samurai wasp was collected in China and is undergoing host range testing in U.S. quarantine facilities to assess non-target effects for release in the U.S. However, samurai wasp has arrived on its own to the U.S. It has been found in 12 states as of January 2019 (Maryland, Pennsylvania, New Jersey, New York, Delaware, Oregon, Ohio, Virginia, West Virginia, Michigan, California, and Washington).

Samurai wasp is more likely to be found in areas where BMSB are abundant (urban areas of Salt Lake and Utah valleys). However, it could be found in any location with established BMSB populations, making widespread surveys highly valuable.

Lab-reared stink bug eggs are attached to small squares of cardstock paper. These cards are then clipped to the underside of leaves on common hosts of stink bugs in Utah (fruit trees, vegetables, and ornamental trees such as northern catalpa [Catalpa speciosa]) (Fig. 10). Cards are left for 3 to 4 days to attract parasitoids. When collecting cards, parasitoids guarding the eggs are also collected to further assess their efficacy in stinging and developing in eggs.

Stink bug egg masses can be found on the underside of leaves, on the fruiting structures, and occasionally on the stems of host plants (Fig. 11). Just as with deployed egg masses, parasitoids guarding the egg masses are collected to assess efficacy in killing and developing in stink bug eggs.

Yellow sticky cards attract various insects. Cards are deployed for two weeks on the trunks and branches of ornamental and agricultural host plants, after which the wasps are removed from the card and identified (Fig. 12). When placed in areas with high parasitoid wasp diversity, cards are an effective tool for monitoring wasp diversity and density. While cards are effective at locating parasitoid wasps, information regarding the wasp’s behavior on BMSB eggs, or their effectiveness at stinging, killing, and sustaining populations within them cannot be determined.


If You See a Parasitoid Wasp:

If you see a parasitoid on an egg mass, be mindful that it is beneficial for your garden/crops, as the wasps are potentially killing the stink bugs that would normally emerge and begin eating your plants. You can choose to either leave the stink bug eggs and parasitoids on the plant (preferred), or chase off the parasitoid, remove the stink bug eggs from the plant, and freeze or destroy them before they hatch. It is possible that if the parasitoid wasps are left on the egg masses, then you may end up with more wasps, and consequently fewer stink bugs negatively impacting your plants. Parasitoids that are known to attack BMSB eggs in Utah can be seen in Figure 13.

Reports of stink bug egg masses with parasitoid wasps on them are valuable to protect all Utah communities and property owners, and could help find new wasp species that may assist with biological control of BMSB. USU Extension has created a Report an Invasive Pest in Utah website to report a finding, upload a photo, and find contact information for submitting a specimen for identification. Collect the egg mass and wasp in a bag or sealable container for specimen submission.