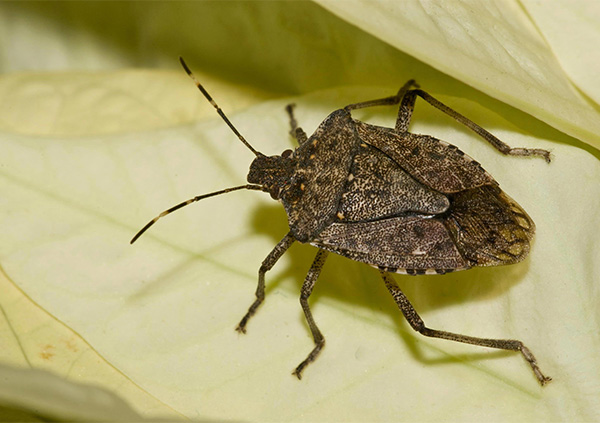 The brown marmorated stink bug (BMSB; Halyomorpha halys Stål) (Hemiptera: Pentatomidae) (Figs. 1-4) is an economically important nuisance and agricultural pest that invaded North America from eastern Asia in the late 1990s. BMSB congregates in and on buildings during the winter, and is known to attack over 170 plant species, including fruit, vegetable, and nut crops, as well as herbaceous and woody ornamentals (see https://extension.usu.edu/pests/caps/bmsb-host-plants for a list of known host plants in Utah). Ornamental hosts in urbanized areas are important to building BMSB populations in the early summer before they move into agricultural crops. BMSB uses a stylet (needlelike mouthpart) to feed on the reproductive structures of host plants, but will also feed on bark, stems, and foliage.

BMSB was first detected in Utah in 2012. Reproducing populations (adults and immature life stages) can be found in Utah, Salt Lake, Davis, Weber, and Box Elder counties, and a few adult bugs have been detected in Cache County. In 2017, BMSB feeding damage was first reported on some fruits and vegetables in multiple counties.

This fact sheet emphasizes identification, monitoring, and management of BMSB. For more general information about BMSB, consult the Utah State University fact sheet “Brown Marmorated Stink Bug” and the references at the end of this fact sheet.

It is important to accurately identify and monitor BMSB and feeding damage before making any treatment. If you are unable to make a definite identification, contact the Utah Plant Pest Diagnostic Lab at Utah State University for help.

Adults are shield-shaped, and about 5/8 inch long and 1/2 inch wide (Figs. 1 and 2). The term “marmorated” refers to the brown marbled pattern on the adult bodies. Their antennae, legs, and posterior edge of the back have distinct light and dark banding patterns. BMSB “shoulders” are rounded and smooth. Adults have undersides that are light gray or tan.

Eggs are barrel-shaped, 1/16 inch wide, and translucent to white in color (Fig. 3). As eggs mature, dark triangular-shaped spots become visible. Eggs are typically laid on the underside of leaves and in masses of approximately 20-30 (average of 28).

Nymphs vary in color, depending on age. Newly hatched nymphs are tick-like in appearance, have yellow-red backs with black stripes, and tend to huddle near the egg mass (Fig. 3). As nymphs mature, they disperse from the egg mass, darken in color, develop wing pads (immature wings), and begin to look similar to adults in color and size (Fig. 4). Nymphs range in size from 1/10 to 1/2 an inch.

Feeding can cause necrotic (dark colored) lesions, pits, depressions, cat-facing (deformities), and gummosis (peach, nectarine, and apricot) on fruits; feeding in fruit flesh causes corky, discolored areas (Figs. 5-7). BMSB feeding can even cause some fruit structures, especially nuts, to abort. Note that damage may not appear until 1-2 weeks after feeding has occurred, and possibly later for fruit stored at cold temperatures.

Mass trapping of BMSB has not been shown to be an effective control option, but pheromone traps should be used to estimate population levels and aid in control decisions. Traps should be placed along the field edge so that BMSB can be intercepted as it moves from urban and forested habitats into the agricultural crop. Where damage has been detected previously, consider placing traps in the interior of the orchard or field as well. Traps should be checked at least once weekly from May through October. Two of the most effective traps that are currently available are the pyramid and the sticky panel traps.

All traps should be paired with a lure. A few different types of commercial lures are available, but research in Utah has demonstrated that more stink bugs are captured with the Trécé Inc. dual lure, comprised of both a BMSB aggregation pheromone (murgantiol) and the synergist methyl decatrienoate (MDT) (Leskey et al. 2012). The dual lure should be replaced at 12-week intervals.

Visual surveys and beat sheets (shaking crop plant over a sheet or cloth tray) can also be useful to detect BMSB. For orchard monitoring, note that BMSB will often move to the upper canopy of fruit trees to feed. Visual monitoring should also include fruit inspections for damage, including internal injury (especially in peach and nectarine), since damage on the surface of some types of fruits may not be visible.

Unfortunately, BMSB is a challenging insect to manage. Both nymphs and adults damage crops, and adults have a tough exoskeleton that is covered with a waxy, water-repellant cuticle that can help protect them from pesticide applications. Further, adults have a strong dispersal capacity, enabling them to easily invade previously-treated areas. Adults can theoretically fly more than 70 miles per day, although most adults fly short distances (Wiman et al. 2014; Lee and Leskey 2015). Ornamental hosts in urbanized areas are important to building BMSB populations in the early summer before they move into agricultural crops. Even nymphs, which are wingless, are relatively mobile due to strong walking capacity (Lee et al. 2014).

Due to challenges with managing BMSB, growers in the mid-Atlantic region with BMSB infestations are relying on weekly, season-long applications of broad-spectrum insecticides, as integrated management programs are still under development. Keep in mind, however, that broad-spectrum insecticides are costly, risk development of pest resistance, can be harmful to beneficial insects, and may contribute to secondary pest outbreaks.

Research has shown that a cumulative threshold of 10 adults per trap indicates the need for an insecticide spray to reduce fruit injury, and continued accumulations exceeding 10 adults per trap would trigger successive sprays as the season progresses (Short et al. 2016). Treatment thresholds have only been developed in apple.

BMSB adults emerge from overwintering sites in response to a photoperiod (day length) of 12.7-13.5 hours (Nielsen et al. 2016; Nielsen et al. 2017), which translates to around mid-April in Utah. After emergence, egg-laying starts at 135 degree days (DD) (base 57.2 °F), and then this first generation matures into adults after an additional 964 DDs (Wilson et al. 2018) (Table 1). Keep in mind that both adults and nymphs damage crops; therefore, accurate timing of sprays is essential to reduce crop injury.

BMSB populations are typically highest on field edges, and research has shown that border sprays can be successful in controlling BMSB in multiple cropping systems (Blaauw et al. 2015; Leskey and Nielsen 2018). In addition to the outside edge, treatment of the first full row of the crop border can provide additional crop protection. Another treatment option is two alternate-row-middle (ARM) sprays (i.e., applying insecticides to only one side of the tree or crop) with 7 days between each spray. Whole-block sprays should be reserved for when BMSB has been detected in traps placed in the orchard or field interior, and later in the season when BMSB feeds intensively before moving to overwintering sites.

Since overwintered adults are more susceptible to insecticides than the summer generation(s), reserve the most efficient products (Table 2) for later in the season. In general, BMSB populations in orchards and fields tend to be highest in August. Further, BMSB will often move to the upper canopy of fruit trees to feed, so target insecticide applications toward the top of trees.

Table 2. The following is a list of insecticides that have demonstrated efficacy against BMSB (Wilson et al. 2018). Note that this list is not exhaustive for every labeled product or active ingredient. Always follow the specific label restrictions for the target crop, including the preharvest interval (PHI) and re-entry interval (REI). Always read, understand, and follow label directions before using any pesticide.