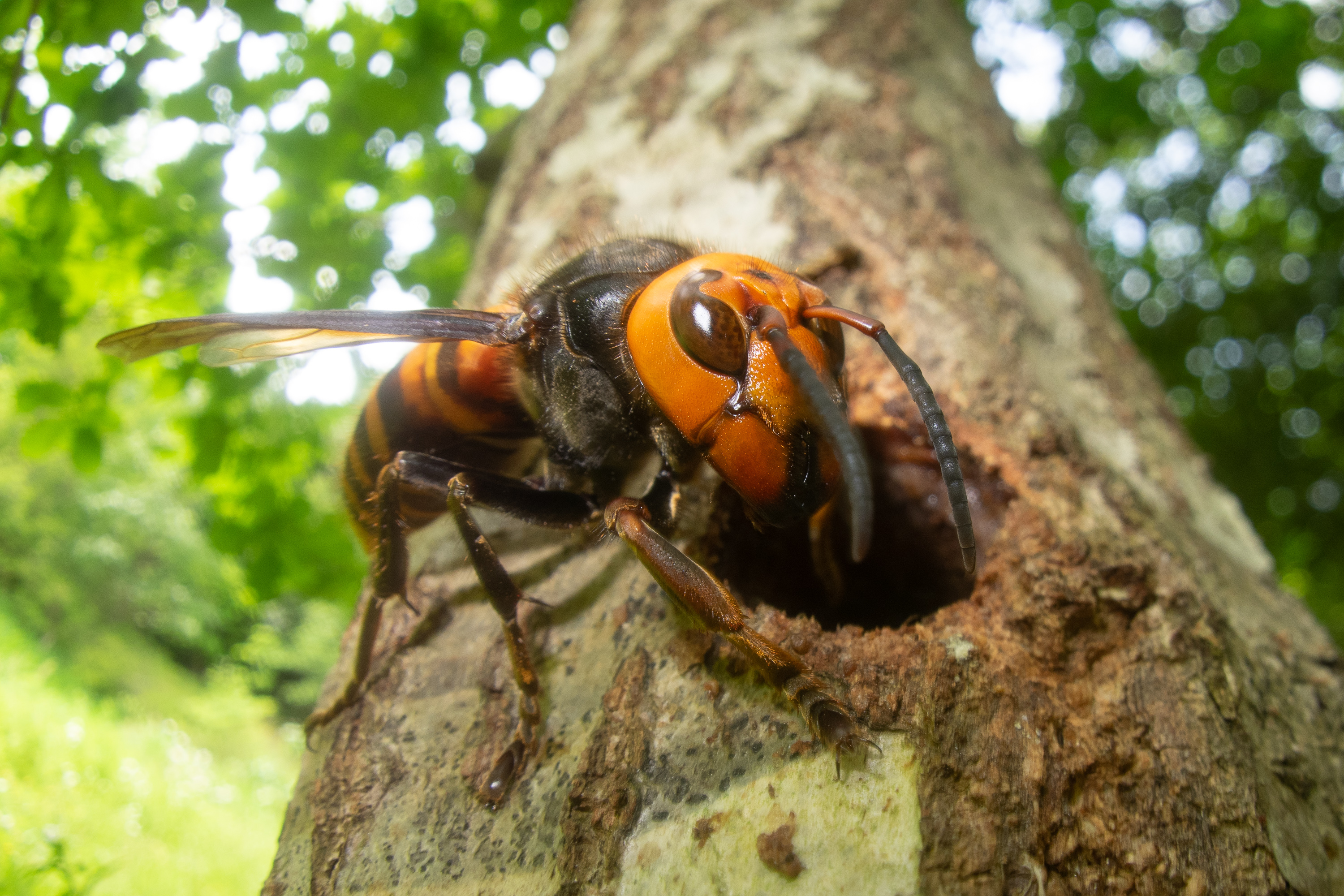 Fig. 1. The Asian giant hornet (AGH) is the world's largest hornet and is about 4 times the size of a honey bee.

The Asian giant hornet (Vespa mandarinia Smith) (Hymenoptera: Vespidae) is an invasive insect that was recently detected in a small area of North America. A single colony was found in British Columbia, Canada in August 2019. The nest was subsequently destroyed. In December 2019, two dead hornets were found near the Canadian border in Washington. In spring 2020, one hornet was found in each of the above locations. Despite these detections, AGH is not known to be established in North America. It has NOT been detected in Utah. If you are located in Utah and suspect AGH, please contact the Utah Plant Pest Diagnostic Lab at Utah State University or the Utah Department of Agriculture and Food. AGH’s natural distribution includes parts of Asia, including southern China, northern India, Japan, Korea, Malaysia, Nepal, Taiwan, Thailand, and a very small part of eastern Russia. AGH is best adapted to areas between the temperate and tropical zones, and is more closely associated with lowlands than high elevations. Although it has been collected at about 7,000 ft. in Myanmar and about 3,800 ft. in Pakistan, wasps there are rare and populations occur at low densities.

Hornets are wasps in the genus Vespa. There is only one other true hornet in north America, the introduced European hornet (V. crabro), which occurs in parts of the eastern U.S. AGH is the world’s largest hornet. Adult AGH workers vary in length from 1 to 1 1/2 inches, while queens can reach up to 2 inches. They have a wingspan of about 3 inches. Adults have a large orange or yellow head, prominent eyes, orange mandibles, dark brown antennae with orange segments at the base, a dark brown thorax, and a brown/black and yellow striped abdomen (the last or 6th segment is yellow) (Figs 1-4). Females have stingers that are about 1/4 inch long, whereas males are stingless. Larvae and pupae are confined within the nest cavity and can be identified by their large size (compared to other hornet species). Larvae are about 1 to 1 1/2 inches long, barrel-shaped, and yellow to white in color. Pupae closely resemble adults, with large black eyes and similar coloration. 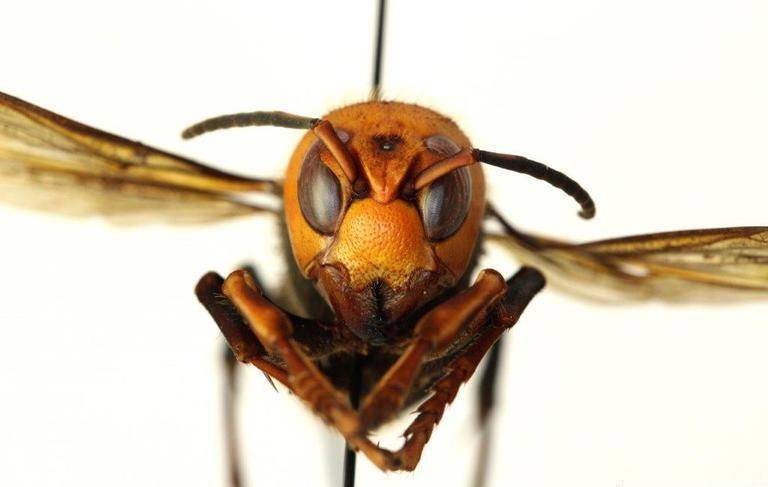 Fig. 2. AGH has prominent eyes, orange mandibles, and dark brown antennae with orange segments at the base. 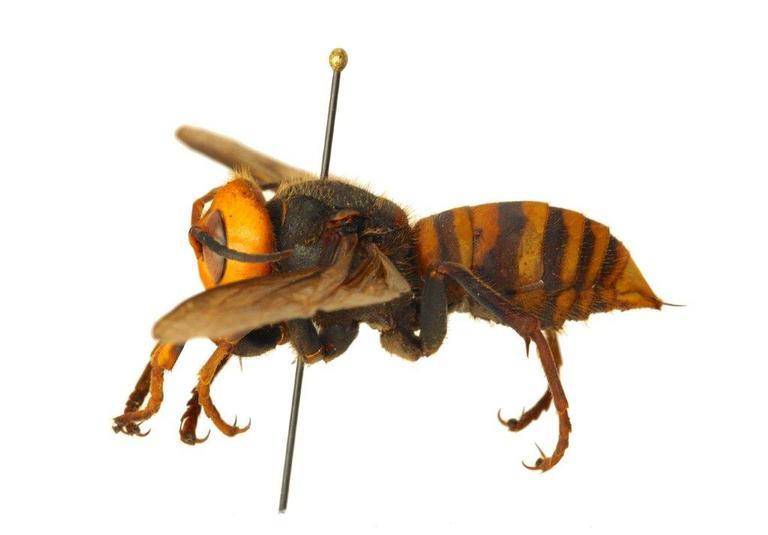 Fig. 3. AGH has an orange head, dark brown thorax, and a brown/black and yellow striped abdomen. There is a distinct contrast between the orange head and brown thorax. 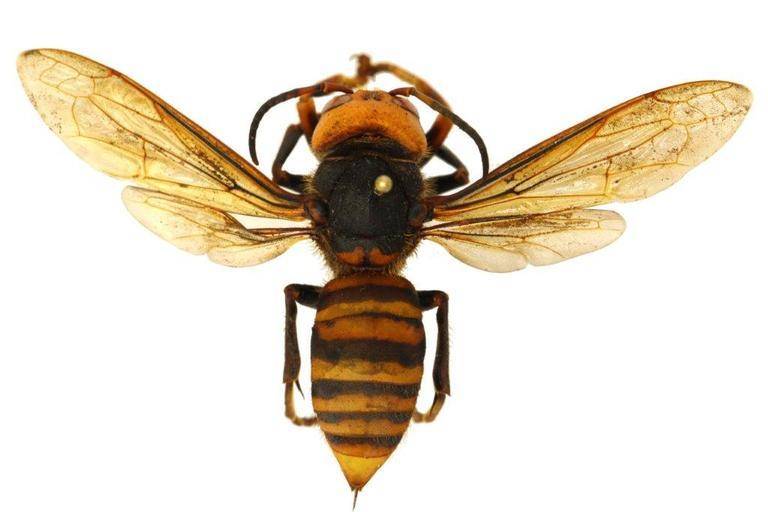 Note that there are many other insects in Utah that may be mistaken for AGH, including the tarantula hawk wasp, western cicada killer, sand wasps, mud dauber/mason/ potter wasps, the pigeon tremex, giant ichneumon, European and native paper wasps, yellowjackets, great golden sand digger, and scoliid wasps (Fig 5). Further, the European hornet (Vespa crabro) is an invasive insect that might also be confused for AGH due to its size, shape, and color (Fig 6); however, it is currently only found in the eastern part of the U.S.

AGH is a social insect that lives in colonies (nests) made up of one queen and her offspring. Colonies are established in the spring by mated queens. After spring emergence, the queens locate a suitable nest site while feeding on tree sap for energy. Nests are typically constructed underground in pre-existing cavities or burrows (Fig 7), and are often large (e.g., mature nests may contain 1,000 or more cells). Larvae develop through five instars, feeding on bits of prey or tree sap (left for them by the queen), and eventually pupate within the brood cell. The new workers then emerge and take over foraging duties, while the queen continues to lay eggs. Colonies grow over the summer, and new reproductive queens and males emerge in the fall (October) to mate with each other. In late fall, the founding queen dies after which the colony diminishes in size before succumbing to lack of worker replacement. New, mated queens overwinter in the soil to emerge the following spring. 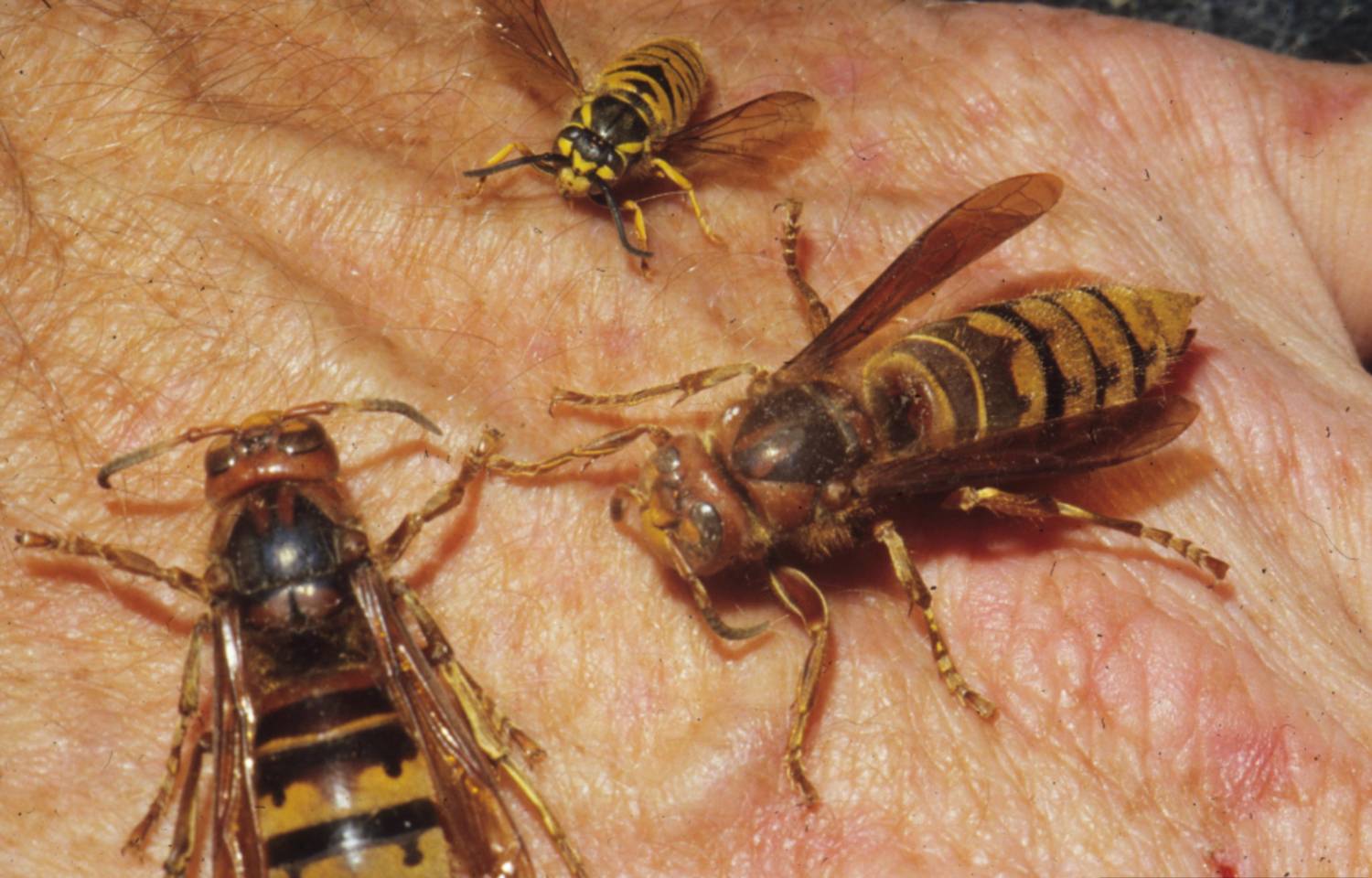 Fig. 6. European hornets (V. crabro) are established in parts of the eastern U.S., but have not been detected in Utah. They are slightly smaller than AGH (1 - 1 1/2 inch in length) and have an abdomen that is mostly pale yellow with black stripes.

AGH feeds mostly on large beetles, but will also consume honey bees and other insects, spiders, as well as tree sap, nectar, honey, and soft fruits. Adults feed only on prey or plant juices, but feed their larvae chewed-up prey. Workers tend to forage for food within one mile from their nest, but can fly up to about five miles. AGH attacks honey bees and other social insects in three phases: 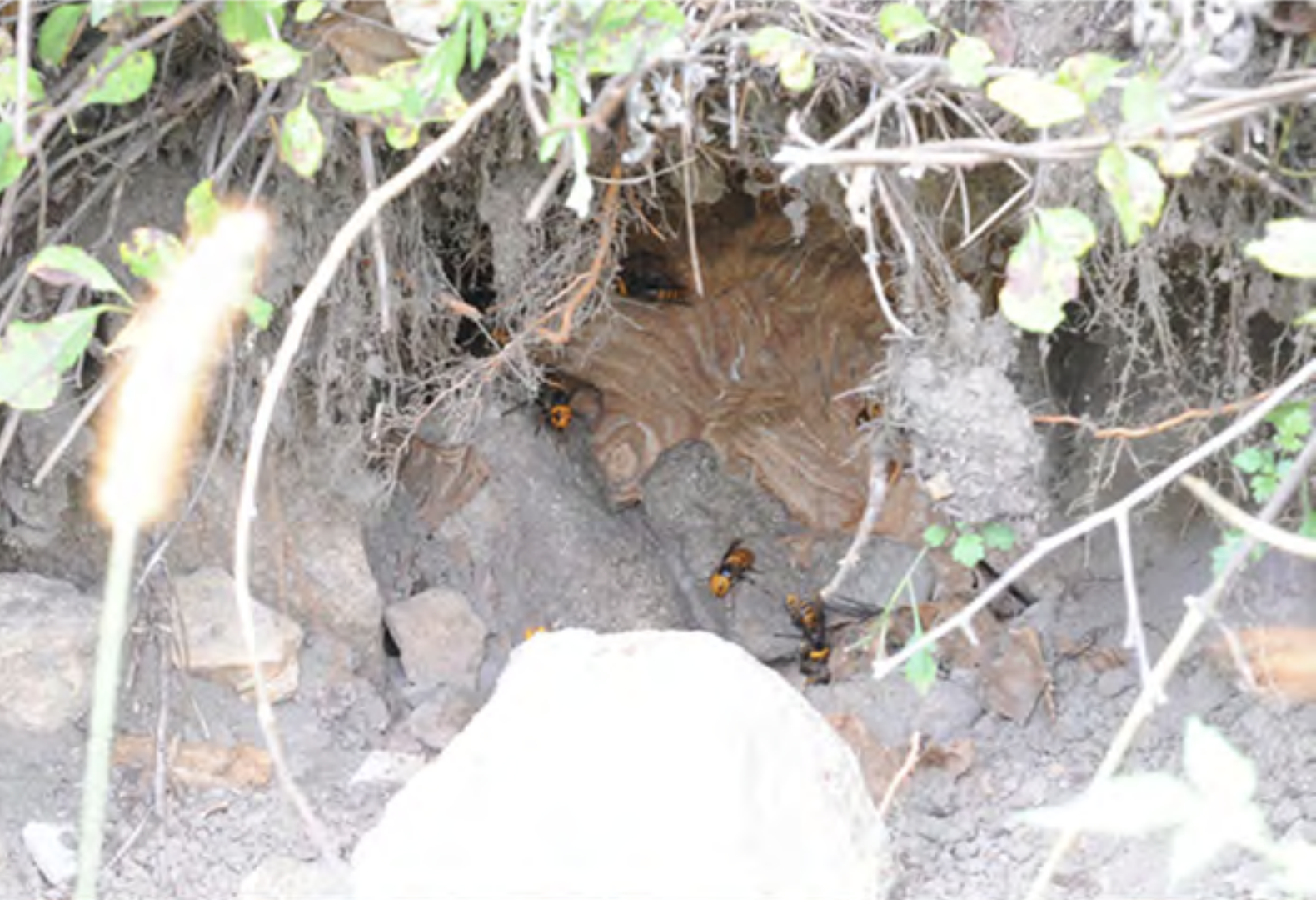 AGH does not generally bother humans or pets, but it will defend its nest or food source. They can sting repeatedly and their venom is more toxic than that of most other insects. Their sting has been compared to that of the tarantula hawk, the bullet ant, and some velvet ants that have some of the most painful stings in the world. AGH is most aggressive during the slaughter and occupation phases of its attack. In Japan, 30-50 people per year die from AGH stings. Most deaths come in the form of anaphylaxis and cardiac arrest; other sting victims succumb to rare complications. If you stumble upon a nest, calmly walk away; however, note the location of the nest and then contact local authorities. AGH can fly at the speed of about 20-25 MPH, so the odds of you running to avoid it is highly unlikely. If an AGH stings you, thoroughly wash the site with soap and water, apply ice to prevent the venom from spreading to other parts of the body, and take an antihistamine to reduce itching (if necessary). Call 911 if you are stung multiple times, have signs of an allergic reaction (trouble breathing or swallowing), feel faint or dizzy, or have other signs of systemic illness. If you have known allergies to stings, administer a shot of epinephrine with an epipen. Beekeepers are more likely to encounter AGH than other members of the community. The usual beekeeping suit is not thick enough to prevent AGH sting hazards. As a result, specialized suits are worn in Japan to prevent injury. The suit is multilayered and the outside material is slick to prevent the hornet from holding on to the suit.

AGH has not been detected in Utah. The distribution of AGH in its native range occurs within plant hardiness zones 3-13. In the U.S., all states in the lower 48 fall within this range. However, the elevation and climate of the Intermountain West likely lies at the relative limits of what this insect prefers ecologically (i.e., lower elevation, between the temperate-tropical zone, and above zone 5). If AGH did make it to Utah, they may only be a minor part of the overall wasp community and would not take over urbanized areas like the European paper wasp has. Knowing this, the below paragraphs are for informational purposes only, and will be expanded if AGH becomes established in or near Utah in the future.

A variety of traps and baits have been used in Japan to capture AGH, but their efficacy has not yet been tested in the U.S. Washington State Department of Agriculture is working to locate and eradicate populations by using bottle traps baited with rice cooking wine and orange juice. However, please DO NOT trap for AGH if you live outside Washington. At this time, you have virtually no chance of catching AGH; instead, you will kill only local insects, some of which may be beneficial. Hornet traps bought commercially in the U.S. will not work for AGH, primarily because the entrance holes are too small.

[Update 8/2022: Northern giant hornet is the new common name for this pest.] Asian giant hornet is an invasive wasp that was detected in northwest Washington and British Columbia, Canada in fall 2019 and spring 2020; however, it is not known to be establi