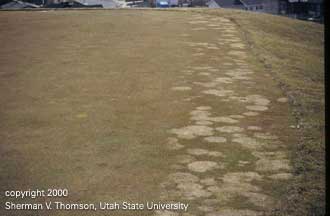 Irregular patches of dead turf. The circles with a pinkish hue are pink snowmold, those with a lighter (almost bleached) appearance are gray snow mold infections. 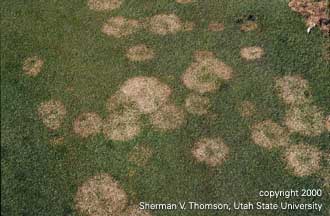 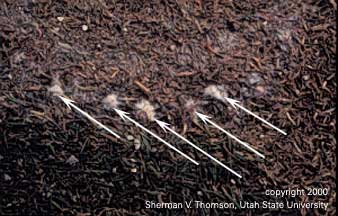 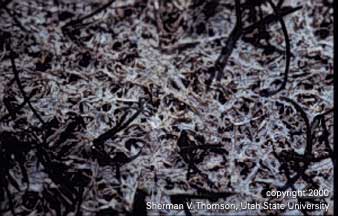 Hyphal mat produced by the gray snowmold fungus. Dead patches of grass, usually with a gray-white hyphal mat are symptoms of a gray snowmold infection. 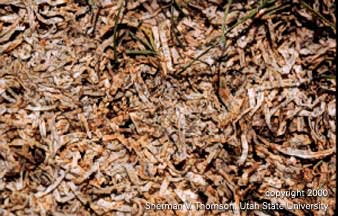 Matted patch of grass infected with the gray snowmold fungus. 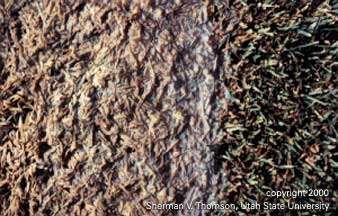 Advancing border of turf infected with a snowmold fungus. 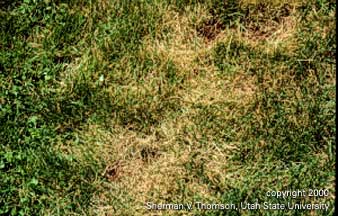 Thinning and necrosis of grass, common when Melting Out fungi are infecting the plant tissues. 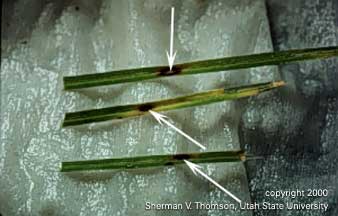 Characteristic Melting Out lesions indicated by the arrows. Lesions are brownish-purple and circular to oval in shape with straw colored centers. 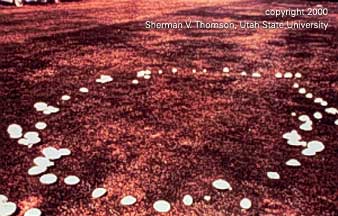 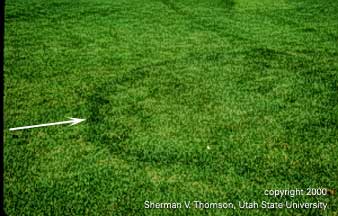 Circle of dark green grass as indicated by the arrow shows the active edge of the fairy ring. Vegetative portions of the causal fungus will continue to radiate outward periodically producing mushrooms.

Importance: A serious problem where persistent snow cover is common.

1. Aerate to reduce thatch in early spring.
2. Avoid a single heavy application of soluble nitrogen in the spring.
3. Water infrequently but deeply.
4. Mow at 2.5 - 3 inches during hot weather.
5. Apply fungicide to areas where problem has occurred in previous years.

Importance: Can be a serious problem in spring and fall.

Symptoms: Dead circles or arcs that range in size from several inches to several feet in diameter. Microscopic dark hyphae can be found on the grass crowns. Difficult to control even with fungicides.

1. Aerate to reduce thatch in early spring.
2. Nitrogen fertilizer should be applied frequently and at low rates when the grass is actively growing. Use an acid type fertilizer like ammonium sulfate.
3. Keep mowing height at 2.5 - 3 inches.
4. Water infrequently but deeply.
5. Apply fungicides where necrotic ringspot has been a problem.
6. Replant with several grass species with resistance.

Importance: Can be a serious problem . May be present during the summer.

Symptoms: Dead circles or arcs that range in size from several inches to several feet in diameter, indistinguishable from necrotic ring spot. Microscopic dark hyphae can be found on the grass crowns. Difficult to control.

1. Aerate to reduce thatch in early spring.
2. Nitrogen fertilizer should be applied frequently and at low rates when the grass is actively growing.
3. Mow at 2.5 - 3 inches.
4. Water infrequently but deeply.
5. Apply fungicide where the disease has occurred.
6. Replant with several grass species with resistance.

Importance: Common but only important in a few situations.

Symptoms: Circle of dark green grass with mushrooms forming in the band. Occasionally, the grass dies within the ring.

1. Do not plant turf in heavy shade.
2. Prune trees and shrubs to enhance light penetration.
3. Water infrequently but deeply.
4. Plant shade-adapted varieties (fescue).
5. Apply fungicides to turf with a history of mildew.

*Some of the fungicides listed are not readily available for home lawn use but can be obtained from commercial businesses or applied by a commercial operator.