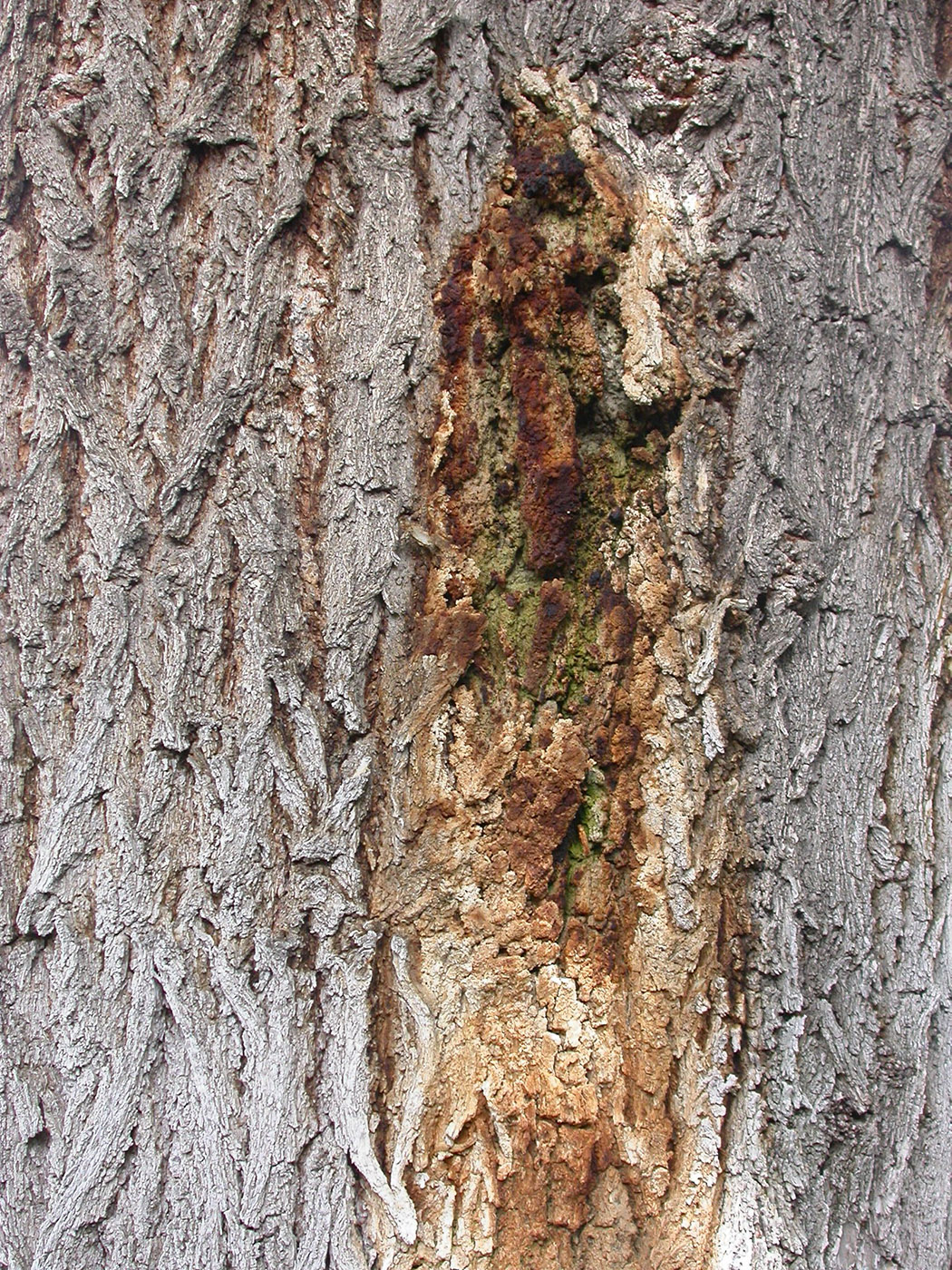 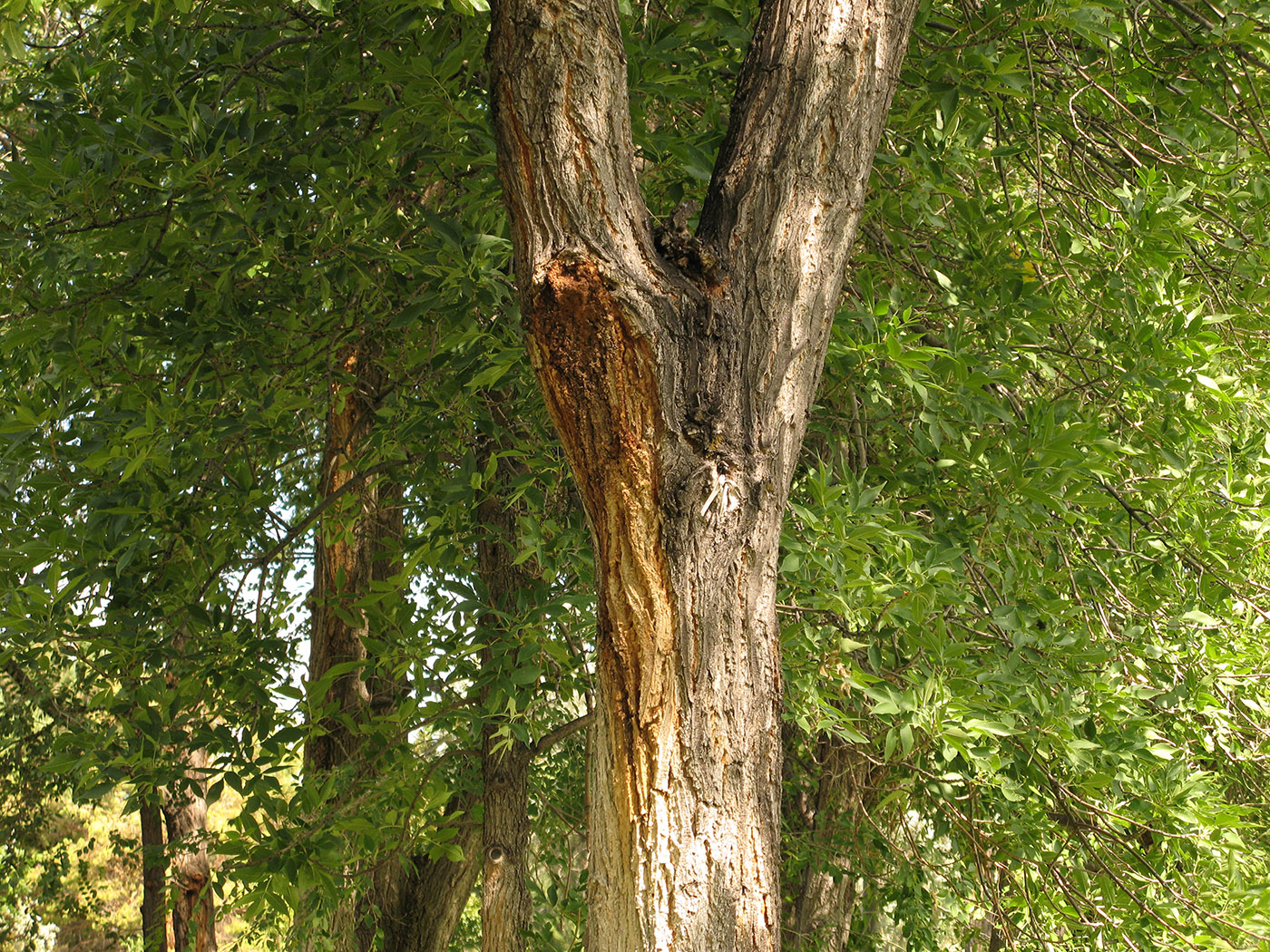 Slime flux on an elm tree.

Slime flux, often called bacterial wet-wood, is a bacterial disease found in many different types of trees. In some trees, particularly willow, this disease results in a white to gray foam that bubbles out from under the bark. In other cases, as with elm and cottonwood, infection results in wet gray to brown areas on limbs and trunk. In the latter case, the slime runs down the bark, discoloring plant tissues and resulting in a build-up of dry scum. Slime flux (wetwood) is a bacterial fermentation of tree tissue, resulting in the disagreeable odor associated with this problem.

The bacteria enter through open wounds in the bark. Wounds as small as cat scratches can serve as avenues of infection; however, more trees are attacked through wounds from improper pruning, boring insects, poor branch angles, tree houses, and lawn mowers. The latter can be avoided by replacing grass around the base of trees with a mulch of gravel or bark or remove grass with herbicides. Improper pruning wounds can be avoided by learning proper pruning techniques. Avoid topping trees.

There are two types of slime flux in Utah, the heartwood type and bark/cambial type. Each type needs to be discussed separately because the treatment is different for each.

The bacteria attacking heartwood result in the build-up of internal pressure up to 60 pounds per square inch. This can cause bursting of the infected tree, but more often the pressure forces the ooze out through cracks that extend from the heartwood (inner portion) to the bark surface. Flux runs down the tree trunk, killing the bark tissue it contacts. It also drips to the ground where it kills grass or other plants, leaving large yellowish, dead areas. Trees are rarely killed with this type of infection.

Bark/cambial infections frequently result in death of the tree within 1-2 years. In willow, the bacteria tend to be limited to the tissue between the outer bark and the wood called the cambium. Fermentation produces the offensive odor and slime, but attempting to alleviate the problem by inserting a tube does not relieve the problem. If the fluxing is noted soon enough, the tree can be saved. Waiting and hoping the problem will correct itself often results in a dead tree.

There is no cure for the heartwood infection that is common in elms, cottonwoods, and other poplar species. Drilling a hole in the infected area and inserting a plastic pipe to drain off the ooze can relieve the internal pressure. This prevents the unsightly slime from running down the trunk or killing the grass, but does not eliminate the infection.

Trees suffering from bark/cambial infections may be saved by promptly cutting away diseased tissue. On small branches it is best to prune the infected branch off at a lateral. With larger branches or trunk infections, remove all discolored bark down to the wood. Cut around the infected trunk or branch until you come to healthy, yellow-green cambium. In some cases this means removing a lot of bark. If the infection encompasses more than half of the trunk, it is probably best to treat with a chain saw at ground level and start over again with a less susceptible tree.

The next step consists of shaping the wound to allow it to heal properly. Remove infected bark creating an oval shape. The long part of the oval should be parallel with the trunk or limb. Make the margins of the cut smooth and clean. Sterilize the knife with rubbing alcohol between cuts to prevent spread of the bacteria.

The final step involved cleaning the wound with a disinfectant such as rubbing alcohol or a 10% solution of bleach (1 part household bleach and 9 parts water). Watch the treated area for evidence of recurring disease activity. If tissue on the edge of the wound begins to flux, a spot of diseased tissue may have been missed.