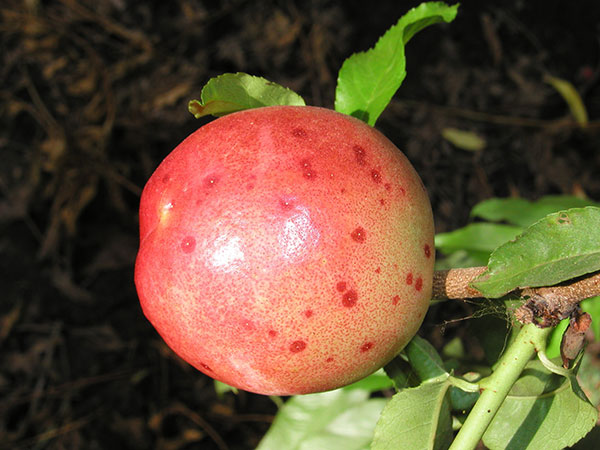 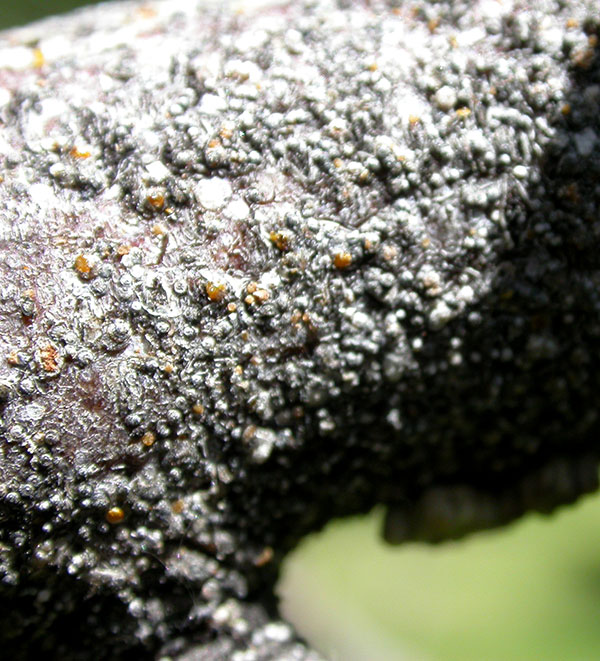 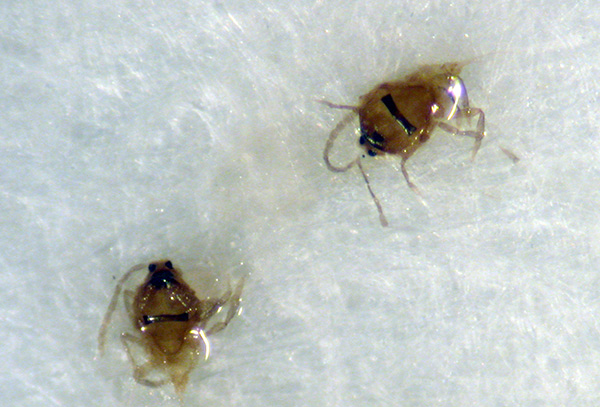 Adult males caught in pheremone trap; note the dark band across the back and long antennae. 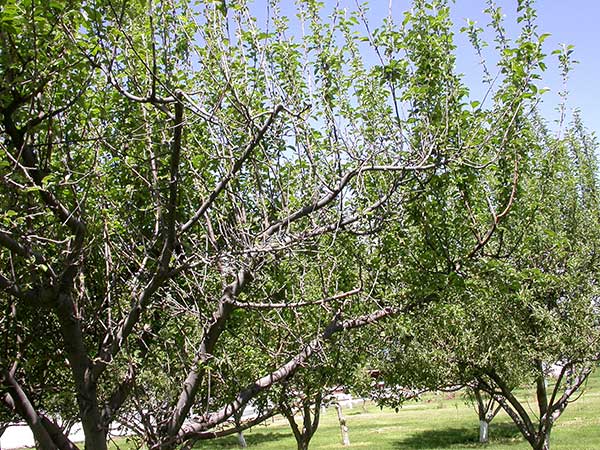 San Jose scale (Quadraspidiotus pernicious) is a tiny, unusual insect that spends most of its lifetime attached to a tree where it sucks plant juices. This pest attacks limbs, fruits, and leaves. The male is the only stage that flies, while the young and females remain on the tree. Although it is not a very mobile insect, populations on a tree can reach high numbers within a season. A single female and her offspring can produce several thousand scales in one season. If left uncontrolled, scale can make fruit unmarketable and even kill the tree.

Black Cap nymphs are circular with no legs, less than 1/25 inch in diameter, with black bands surrounding a lighter cap. They are typically found on tree bark. Female adults are gray, circular, slightly raised, and about the size of a pinhead. They often have a ringed appearance and can reach 1/12 inch in diameter. The soft body underneath is yellow with no wings or legs. Male adults are gold with a dark band across the back, 1/25 inch long, and have wings and long antennae. Crawlers are about 1/100 inch long and 1/250 inch wide, bright yellow, and oval. They walk or are carried by air currents, farm machinery, or other means to the bark, fruit, or leaves of a tree.

The best approach to managing San Jose scale is to prevent infestations from becoming established and spreading. One of the best ways to do this is to apply horticultural oil plus an insecticide at the delayed dormant timing. This treatment is more effective at preventing scales from becoming established in orchards than late spring or summer treatments. However, late spring treatments that target the crawlers can prevent infestations of the fruit. Closely monitoring for signs of scale and injury on harvested fruit during picking or in the packing shed or on tree limbs during pruning can help identify scale infestations before they become a major problem. It is also important to examine young trees not receiving a full spray program. Controlling infestations in the early stages will not only protect tree vigor but will prevent infestations from spreading to other trees in the orchard.

There are a number of predators and parasitoids that attack San Jose scale. These natural enemies may help reduce scale populations in Utah, but generally they do not provide enough control to prevent damage when scale populations are high. Natural biological control is only considered a supplement to chemical control. Keep in mind that using insecticides during the growing season can disrupt the biological control of many orchard pests, including natural enemies of San Jose scale.

Good pruning practices can help reduce scale problems. Pruning out infested limbs and water sprouts can help reduce spring and summer scale populations as well as open up the canopy to allow better spray coverage in tree tops where scales are often concentrated.