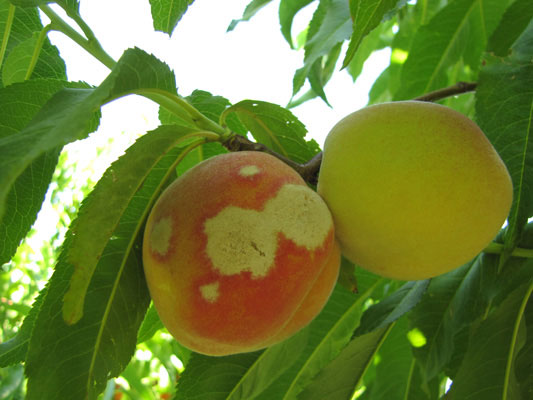 Powdery Mildew on a Peach 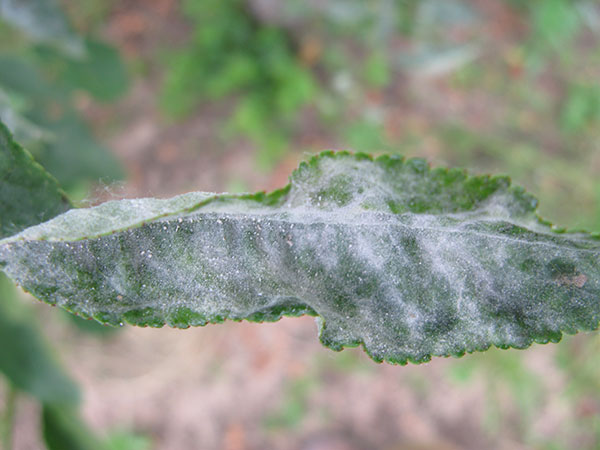 Powdery Mildew on a Cherry Leaf

Powdery Mildew can affect most fruit trees, attacking leaves, flowers, and fruit. The most noticeable sign is a white powdery residue, which is a mixture of the fungal mycelium and spores. Certain apple varieties (Jonathan, Idared, Gala, Jonagold, Winesap, Rome), most cherry varieties, and grapes are susceptible. Peaches and other berry crops may also be affected in years of moisture and humidity. Infections begin in late spring, during warm days, cool nights, and some form of moisture. The spores are spread by wind, dripping dew, rain, and irrigation.

Powdery mildew is caused by several different fungi that form a greyish-white powdery coating on terminal shoots and leaves. It also may form a network of lines (russet) on the skin of apple fruits if the fruit are infected at relatively early stages of development. The powdery mat consists of fungal strands and spores which are microscopic in size. Because the spores are extremely numerous and easily spread by wind, many infections can occur over the season. Thus the disease can become widespread and increasingly destructive.