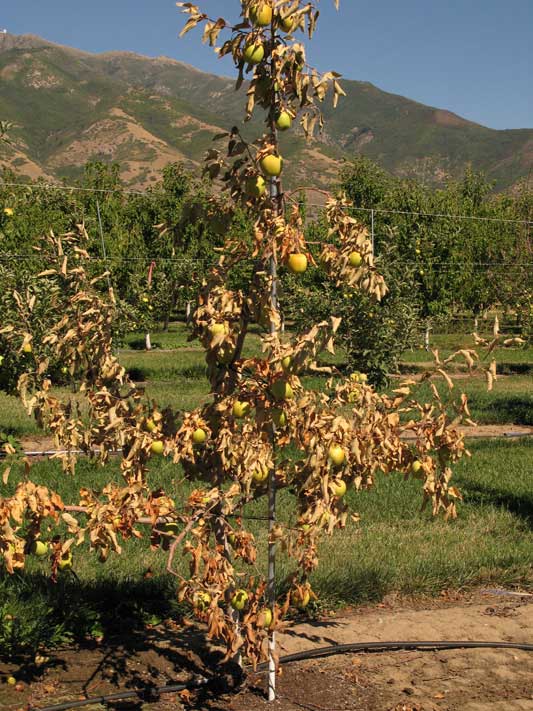 Aboveground symptoms of an apple tree infected with phytophthora. 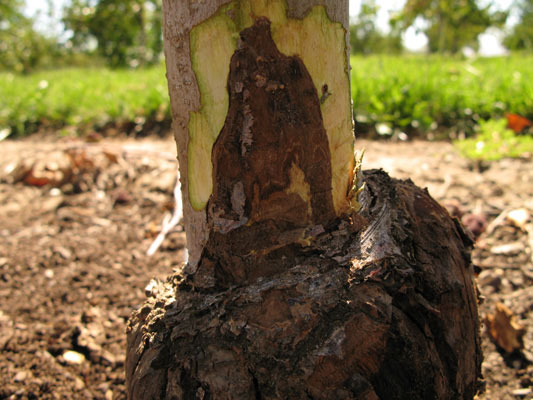 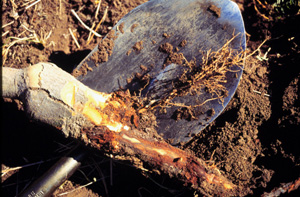 Characteristic browning of crown tissue when a phytophthora infection has occured. 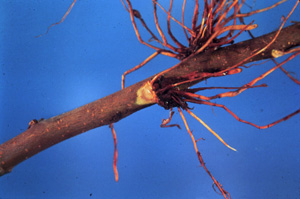 Roots and rootstock infected with phytophthora. Root rots of this sort can be determined by the discoloration of vascular tissue and the cortical root tissue.

Phytophthora collar rot is a serious and costly disease, frequently killing trees of 5-7 years of age, just as they are beginning to bear fruit.

The crown rot disease on apples and pears is caused byPhytophthora cactorum. The disease on stone fruits is caused by several closely related species of Phytophthora: P. cambivora, P. megasperma, P. dreschsleri and P. syringae. These fungi are more active in soils with high moisture and in temperatures ranging from 55 F- 70 F (13 to 21 C).

Collar rot can be found in young orchards as well as older plantings. It is especially serious when replanting in old orchard sites. Irrigation greatly influences the disease since the fungus is a water mold. It is more serious in heavy, poorly drained soils than in light, well-drained soils, although it can occur in almost any soil when improperly irrigated.

The fungus can be introduced into an orchard on planting stock, irrigation water or on contaminated farm implements. Other root problems may cause similar above ground symptoms and thus confuse diagnosis. Winter injury may predispose the tree to invasion by secondary invaders. Mice or other rodents may girdle the tree at the soil line. The only positive diagnosis is the appearance of the cankers and isolation of the fungus.

Collar rot is difficult to control because it is an erratic disease and we have an incomplete knowledge about the disease cycle. When infections are discovered, it is usually to late to eradicate the disease and save the tree.

Choose resistant varieties and rootstocks. This is the most effective means of control. Susceptible rootstocks should not be planted where the soil is heavy or poorly drained. The most susceptible apple rootstocks are Lodi, Grimes Golden and Duchess. Golden Delicious, Jonathan, McIntosh and Rome Beauty are moderately resistant. Red Delicious, Wealthy and Winesap are considered to have good resistance. Seedling Rootstocks appear somewhat tolerant of collar rot.

Collar rot is most prevalent in sites that are low or have poorly drained soils. Do not allow a basin to form around the trunk or place trickle irrigation outlets so that the tree base is continually wet. Always channel water away from the trunk. Keep irrigation periods to less than 8-hour runs. Plant trees on raised beds.

Do not plant trees so that the graft union is below the soil line. This results in increased collar rot and may allow the scion to establish roots thus resulting in loss of dwarfing or lack of tree uniformity.

Reject trees with discolored or damaged roots. Purchase trees from a reputable nursery with a good history of quality trees. Provide tree support. Young trees will "rock" in the wind, resulting in an opening or a well around the tree which collects water. This leads to increased cold injury and collar rot.