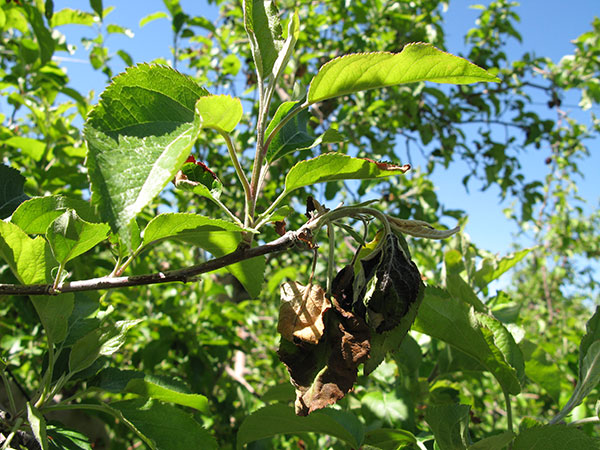 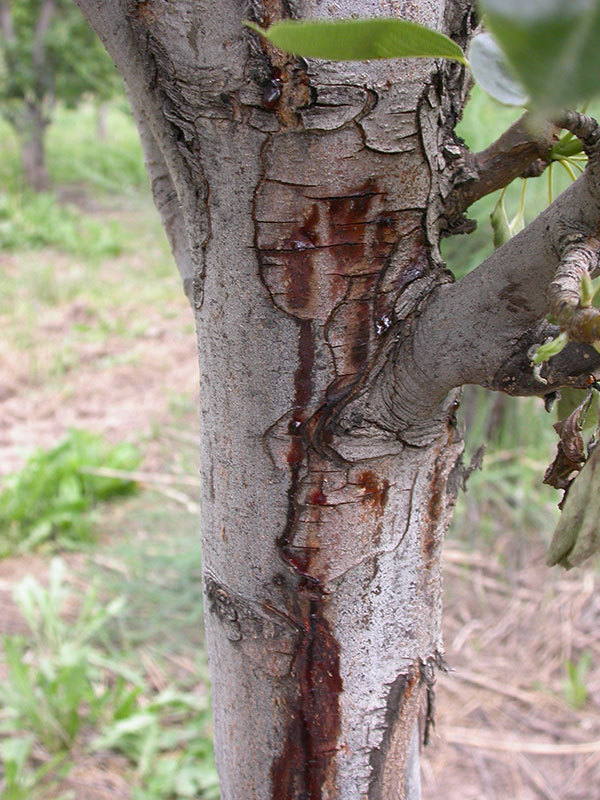 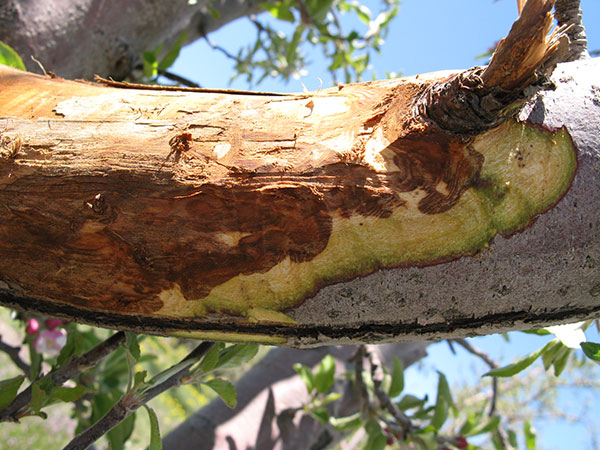 Fire blight is a bacterial disease of rosaceous plants. Economically, it is most serious on pears and apples. The bacterium that causes fire blight, Erwinia amylovora, can be spread by insects, contaminated pruning or grafting tools, infected grafts, and any manner that carries the bacterial pathogen from an infected plant to one that is not, including wind and rain-splash. Pear and apple are most susceptible at flowering, but actively growing shoots can be infected as well.

Fire blight can be managed by cultural and chemical means. Carefully pruning to remove infected wood in combination with the use of agricultural antibiotics are the most effective means to manage fire blight. Agricultural antibiotics, typically used by commercial growers to control the pathogen, are available to homeowners, but in certain areas of Utah, the bacteria can be resistant to streptomycin. Vigilant scouting for the disease combined with careful pruning techniques are recommended to manage fire blight in pear and apple trees.

Fire blight is a serious bacterial disease of pears and apples that was first observed in the late 1700’s in the Northeastern United States. It has since been found in all pear and apple-producing areas in the United States, as well as in New Zealand and Europe.

Erwinia amylovora has the ability to infect many ornamental plants of the rose family, but is particularly important on pear and apple.

It not only destroys the current season’s crop, but may damage the structure of the tree and reduce subsequent production. Highly susceptible trees may be killed in a single season.

Any practice that promotes excessive succulent growth should be avoided. Trees should be fertilized to promote good health, but overfertilization with nitrogen or applications late in the season often cause excessive new growth that is susceptible to fire blight infection. Remove blighted blossoms and twigs as soon as they are evident. The infected blossoms and twigs should be pruned a minimum of 8 - 12 inches below the obvious infection. Avoid heavy pruning in the early summer because it stimulates succulent growth, which is very susceptible to blight.

During the dormant season, remove any cankers or blighted tissue. Also, remove any suckers growing up from the roots or on the trunk. It is advisable to avoid using pruners on small twigs; use hands to break out the blighted twigs. Pruners should be soaked in a 10% solution (1 part bleach:9 parts water) of household bleach, or good surface disinfectant, between cuts when pruning out active fire blight in the summer. Bleach solution is effective but is corrosive to pruning tools. Rinse, dry, and oil the tools several times during the pruning. Pruners need not be sterilized between cuts when pruning during the dormant season.

Hosts of fire blight such as pyracantha, hawthorn, cotoneaster, and crabapple growing near the orchard should be eradicated. This will reduce fire blight inoculum in the orchard. Avoid excessive irrigation to reduce humidity in the orchard. If using sprinkler irrigation, do not allow the water to wet the foliage since it will act in the same manner as rain in spreading bacteria. No cultivars are completely resistant to fire blight, but some are less susceptible than others. If fire blight is a common problem in your area, plant less susceptible varieties.

How To Control Fire Blight