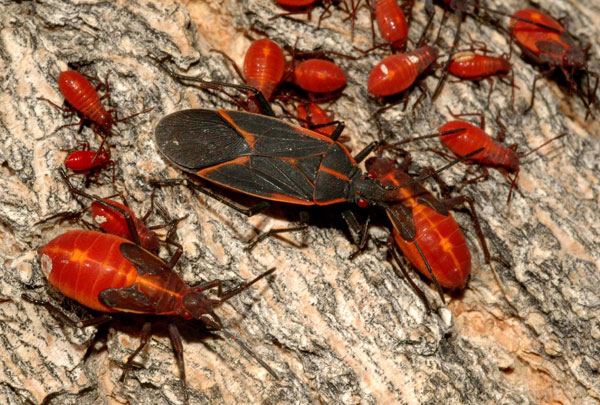 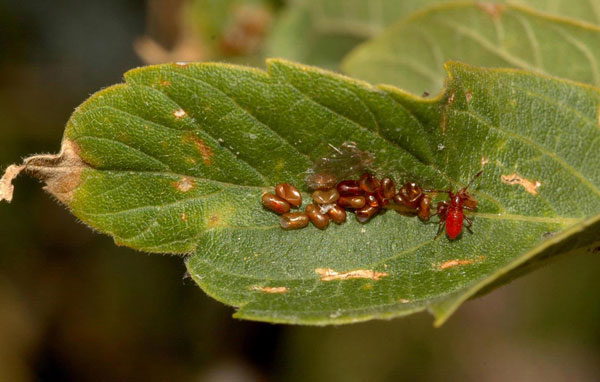 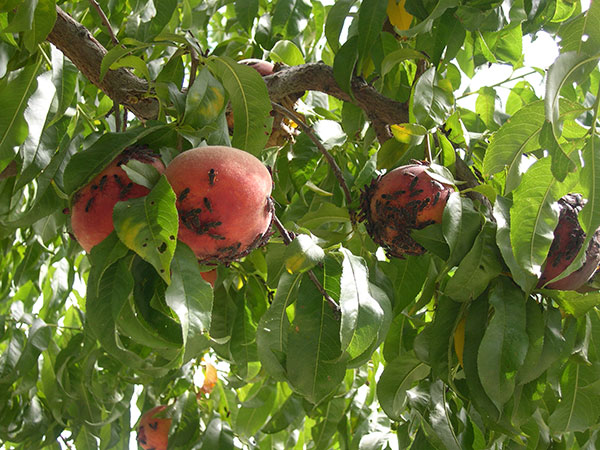 Boxelder bugs are generally not pests of great concern in fruit orchards; however, adults can damage fruit when large numbers migrate into orchards in search of overwintering sites in the late summer and fall.  They can cause fruit injury similar to that of late-season stink bug feeding, such as dimples, scarring, and fruit deformation.  Large populations generally develop only on female (seed-bearing) boxelder trees and relatives, where they feed primarily on the developing seeds.  They generally do not injure ornamentals.  The major concern over boxelder bugs is when they congregate on the sides of or enter into buildings and are a nuisance to people.

Adults are 1/2 inch long, elongated, oval, and flattened on top. Their bodies are gray to black, with distinct red lines on the thorax and wing coverings. THe underside of the abdomen is striped in red and gray.

Eggs are small, oval, and red. They're typically laid on leaves, in crevices of bark, and on other surfaces.

Nymphs resemble small adults without wings. They're bright orange-red when first hatched, and the black markings appear when half grown.

Boxelder bugs use plant hosts in addition to fruit trees for feeding, reproduction, and overwintering.  Most potential problems can be reduced by appropriately managing or removing the alternate hosts.

Insecticides can provide quick and effective control of piercing-sucking bug pests when their use is targeted for substantial populations at a susceptible stage of fruit development.  However, repeated insecticide applications have been shown to quickly create resistance and will dramatically reduce natural enemies.  Therefore, insecticides should not be used unless necessary to prevent substantial fruit damage.

When problems are detected, spot or border treatments are preferable to entire orchard sprays.  Treatment can provide rapid knock-down of fruit-damaging populations, but reinfestation can occur as long as large numbers of the bugs are actively moving into orchards to feed or seek sheltered overwintering sites.