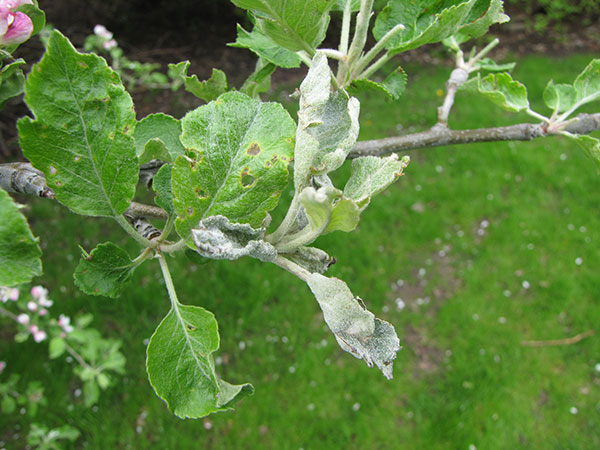 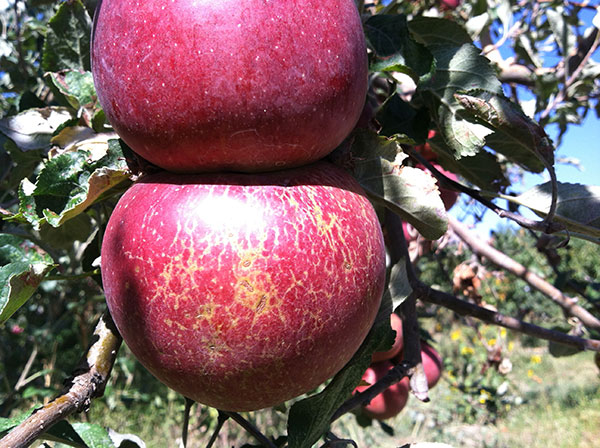 Powdery Mildew is the most common disease of apple trees in Utah. It is caused by the fungus Podosphaera leucotricha. This fungus frequently infects new vegetative growth, causing reduced vigor, leaf malformation, and reduced viability of buds.

The fungus overwinters as fungal strands (mycelium) in leaf or fruit buds which were infected the previous season. Infected buds are not as plump as healthy buds, and they often don't seal properly, resulting in a "feathered" appearance. The buds are more sensitive to cold temperatures and will often die if the temperatures drop below -18F. However, even at lower temperatures some of the mildew survives in infected buds and inoculum is always available. The fungus also produces small black structures called cleistothecia, but the spores from cleistothecia do not play a major role in new infections.

New infections occur in the spring when infected buds open and the dormant fungus resumes growth on the developing tissues. These primary infections result in a white, powdery mass of spores which are easily spread by wind and splashing rain. Secondary infections result when these spores infect developing terminals. Late summer infection of buds results in overwintering inoculum inside the buds.

Plant varieties of apple with resistance to powdery mildew. Cultivars such as Jonathan, Idared, Rome, and Gala are susceptible whereas Red and Golden Delicious are more resistant. Pruning infected buds during the dormant season has not proven to be an effective cultural practice and is not recommended in commercial orchards. However, it might be practical for home owners to remove infected shoots as they appear early in the spring. Chemical control with fungicides is necessary when growing susceptible varieties.

Early spring applications of a fungicide are necessary to prevent secondary spread of the mildew in apples. Neglecting control early in the year will result in poor control during the season. Start at the pre-pink and repeat every two weeks until insecticide sprays begin. At that time, combine the fungicide with insecticide used for codling moth control and repeat as needed for insect control about every two to three weeks. Be vigilant with fungicide applications when the buds are setting in July to reduce the amount of overwintering infected buds. A good mildew control program in the current year reduces the amount of overwintering inoculum and subsequent fungicide applications.