This study was conducted by Travis Mote. His objective was to determine if the availability of nutritious foods that contain tannins or terpenes affects food preference and intake by lambs.

Lambs were divided into in three treatments (8 lambs/treatment) were offered two foods at different availabilities:

Lambs fed 100 g of the tannin-containing food ate more terpene-containing food and total food than lambs fed tannin and terpene foods ad libitum. Limiting intake of terpenes did not improve intake of tannin or total food intake (Figure 1). During preference tests, all groups of lambs preferred tannin over terpene foods, but lambs in the treatment fed 100 g of tannin had a higher preference for terpenes than lambs in the other two treatments (Figure 2).

The availability of foods containing tannins or terpenes affects intake and preference for tannin and terpene foods by herbivores. 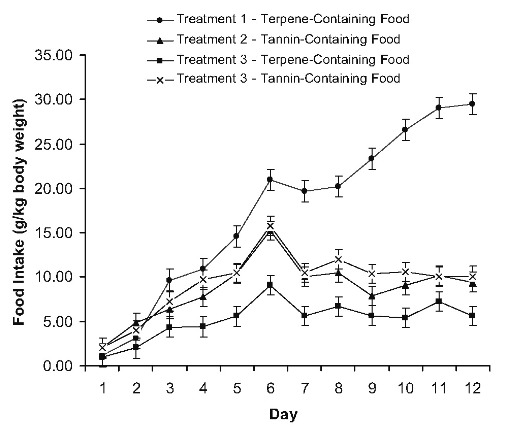 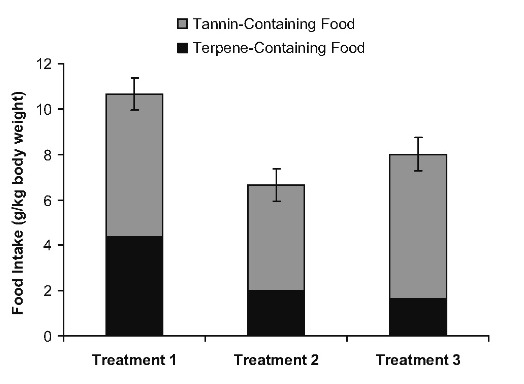 Travis Mote's second study, he looked at how the order in which foods with tannins and terpenes are eaten affects intake and preference of those foods.

He found that sheep ate more foods that contained terpenes, like those found in sagebrush or juniper, after eating foods high in tannins, plants like oak brush, bitterbrush, and sericea lespedeza. In addition, Mote found lambs that learned to eat terpenes after eating tannin had a higher preference for terpenes than lambs that did not eat foods high in tannins before terpenes. It’s thought that tannins bind to terpenes in the gut.

These findings shed new light on a paper recently published in the Journal of Ecology and Range Management. Researchers found sheep with strong preferences for sagebrush (terpenes) also ate a lot of bitterbrush (tannin). Were these just shrub-loving sheep as researchers speculated or did sheep learn to mix shrubs, one high in tannin and another in terpenes, to their benefit?

Mote’s results suggest that managers who can design grazing system to help animals learn how to mix foods in their diets may improve animal productivity as well as aid in maintaining rangeland health and biodiversity by increasing preference for plants high in secondary metabolites.

Toxins are everywhere! All plants contain some level of natural toxins including the vegetables we eat. Most toxins do not cause death or disease but they do limit the amount of a plant an animal can eat. Planting pastures with a single forage species may limit intake and productivity of grazing animals. Planting pastures with a variety of plant species is one solution to the problem of toxins but planting species with toxins that counteract each other may be a better solution.

Graduate student Tiffany Lyman conducted a study to examine how toxins typically found in pasture grasses might complement each other. She focused on two alkaloids typically found in endophyte infected grasses such as tall fescue and reed canarygrass. Tannin and saponin were fed to lambs to determine if eating these toxins would enable lambs to eat foods high in alkaloids.