Many areas in the Western United States are dominated by sagebrush. The increase in sagebrush density over the past century is generally attributed to: 1) reduced numbers of mixed feeders and browsers such as deer, antelope, goats and sheep, 2) increased numbers of cattle and elk, 3) repeatedly grazing the same grasses and forbs, particularly during spring, and 4) fire suppression.

Though the decline in diversity is due in part to grazing, grazing may in fact be the answer to improving plant diversity and wildlife habitat in sagebrush-steppe ecosystems. Grazing by sheep and cattle during the fall, when grasses and forbs are dormant, can increase diversity by reducing sagebrush’s competitive advantage. Supplemental nutrients can improve the effectiveness of fall grazing because sheep and goats supplemented with energy and protein eat nearly twice as much sagebrush as unsupplemented animals. The energy and protein supplements provide enable sheep to better detoxify the toxins found in sagebrush. Thus, intake of sagebrush may be increased if large numbers of supplemented sheep graze sagebrush for a few days in the fall.

We have been investigating methods to increase use of sagebrush by both sheep and cattle. Below are summaries and references of our projects.

Eating Sagebrush to Save It: Creating and Improving Resilience 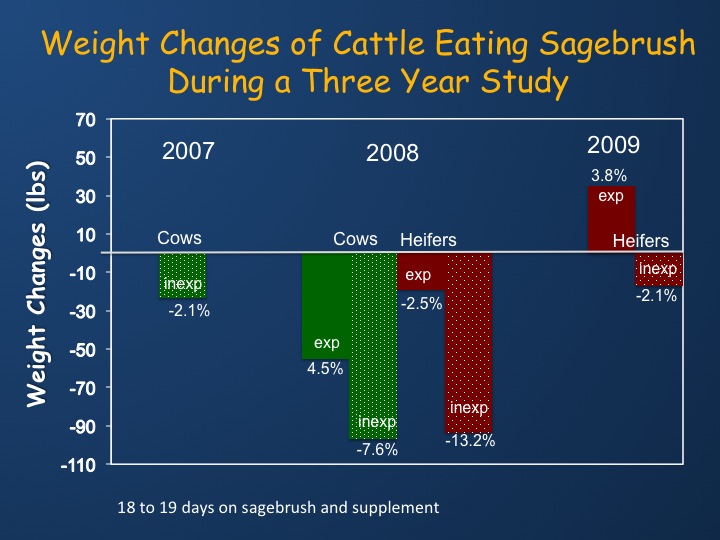 It’s a problem all over the West, old stands of sagebrush poor in biodiversity due to lack of disturbance. Spring grazing by livestock and fire suppression has increased sagebrush density and decreased grasses and forbs.

As managers, we may have unintentionally trained livestock to eat the best and leave the rest.  Failing to challenge them to increase the number of plant species they eat. Chuck Petersen is trying to change that.  As his Masters project, Chuck is teaching cattle that sagebrush can be forage and using them to improve the land.  If effective, this approach to habitat renovation will be an alternative to chemicals, mechanical treatments, and fire.

Chuck is conducting his research on Agee Smith’s Cottonwood Ranch near Wells, NV.  The study plots are a mix of Wyoming and basin big sagebrush with an understory of grasses and forbs.  Each fall as cattle are turned onto the plots, they are supplemented with meadow hay and pellets high in protein and energy to help cattle detoxify terpenes in sagebrush.

When cattle first go onto the plots, they eat the understory and leave the sagebrush.  By the end of the adaptation phase, they are eating sagebrush and are moved to treatment plots.  When cattle enter the treatment plots, they mix sagebrush with the understory.  This change in behavior maybe due to experience alone but some studies suggest that rumen microbes may need to adapt to sagebrush in order to use it. While calves tend to gain weight during the feeding trials, smaller framed cows generally maintain their weight or gained, whereas larger framed cattle tend to lose weight.

Fall grazing is increasing the understory of grasses and forbs and changing the age class structure of the sagebrush in the treatment plots. The graphs below show data from Chuck's plots (grazed and not grazed)  that were grazed in 2007 and then sampled in July of 2009 for percent cover, production, and % species composition. In general, grazed plots contained more grasses and forbs and less sagebrush and other shrubs. 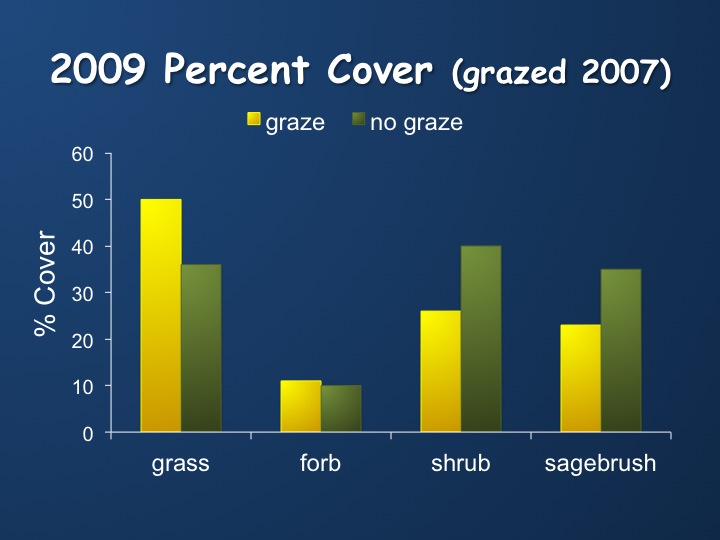 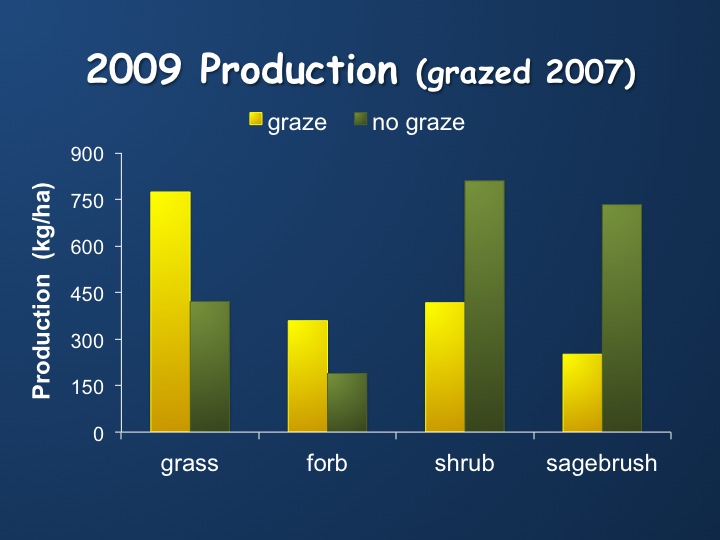 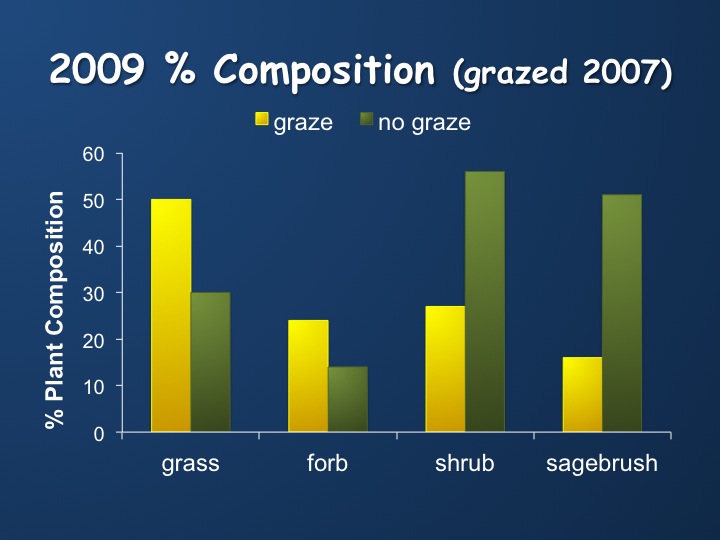 In 2005 after hearing Fred Provenza speak, Mat Carter, an Oregon rancher, felt challenged to use sagebrush as winter-feed and as a way to grow more grass for his cows. That following winter, he corralled 150 cow-calf pairs with electric fence on 5 to10 acres for 3 days and fed them 15 to 20 lbs of meadow hay. The pastures were a mix of low and big sagebrush, gray and green rabbit-brush, bitterbrush with an understory of grasses.  Grazing decreased the amount of brush and increased grass and new sagebrush seedlings.

The following year, Mat used 400 dry pregnant cows. That year snow cover was light so he fed 3 to 10 lbs/hd/d of meadow hay and moved his cows about every 3 days. The amount of hay fed depended on weather and available forage.  Mat noted that as he turned his cattle onto a new strip some ate grass, others bitterbrush and others sagebrush.

In 2008, he leased some cattle and trained them to eat sagebrush.  Snow was deep so only sagebrush was available.  He started feeding 20 lbs of hay and over a 2-week period he reduced hay to 6 lbs/hd/d. Cattle were in good body condition when they came to the ranch and remained in good condition throughout the winter.

Besides saving on hay and increasing the amount of grasses and forbs on his rangeland, Mat has noted several other benefits to using sagebrush as winter forage. His cattle eat sagebrush even when other forage is available. They also eat plants he had never seen them eat before like stinging nettle, whitetop, lupine and various wild flowers. Finally, when cattle graze sagebrush rather than hay, they require less water.

One important point is Mat calves in June.  During the middle of winter his cows have relatively low nutrient requirements. Browsing sagebrush has had no adverse effect on his calf crop and his cattle seem to breed back just fine. He’s found no down side to encouraging his cattle to eat sagebrush.

Our first study was conducted on small pastures (.62 acres) with permanent fences. For this technique to be effective, producers must be able to use livestock to browse large areas of sagebrush either using herding or temporary electric fence.

In 2006, graduate student Michael Guttery, range extension specialist Roger Banner and professors Fred Provenza and Terry Messmer also from USU conducted a study to determine the feasibility of browsing sagebrush with supplemented sheep on at a larger scale. They grazed eight 8-acre plots with 1000 mature ewes from mid-October to the end of November on sagebrush dominated rangeland on Utah’s Parker Mountain. A 35-acre demonstration site was also browsed by 1200 yearling ewes from mid-November to mid-December on Blue Mountain near Vernal, UT.

Ewes received a pelleted supplement of 30% corn, 5% soybean meal, 45% alfalfa and 20% beet pulp. On Parker Mountain, ewes were supplemented at a rate of 2 to 3 lbs/hd/day and on Blue Mountain yearling ewes received 1.7 lbs/hd/day. The supplement not only helped sheep consume more sagebrush but was also used to flush them.

Sagebrush was heavily browsed during the study. The photo above shows the level of heavy browsing most plants received. The objective of this study is to determine if supplementation and high-density, short-duration fall grazing by sheep will increase biodiversity and improve habitat for sage grouse on sagebrush dominated rangeland. The study will also track reproductive performance of ewes and compare costs of grazing treatments with traditional rangeland treatments such as mechanical or chemical methods.

This project was funded by the USDA-NRCS/USU Sage-grouse Restoration Project.

Graduate students Tyler Staggs and Ryan Woodland, and professor Neil West in the Department of Forest, Range and Wildlife Sciences at Utah State University conducted studies to determine if supplementation and high-density, short-duration fall grazing would increase diversity in plant communities dominated by sagebrush. Their study was conducted at Deseret Land and Livestock in Rich County, UT. Their results indicate fall grazing and supplementation with energy and protein reduced sagebrush abundance and increased biodiversity.

The studies above were conducted on small pastures (.62 acres) with permanent fences. For this technique to be effective, producers must be able to use livestock to browse large areas of sagebrush either using herding or temporary electric fence. As a next step, range extension specialist Roger Banner and professor Fred Provenza also from Utah State University plan to graze eight 8-acre plots in sagebrush dominated rangeland on Utah’s Parker Mountain. The study will determine if supplementation and high-density, short-duration fall grazing by sheep will increase biodiversity and improve habitat for sage grouse on sagebrush dominated rangeland. The study will also compare costs of grazing treatments with traditional rangeland treatments such as mechanical or chemical methods.