Tannins are secondary compounds produced by plants. Tannins reduce forage intake and protein digestibility but at the correct dose they may benefit ruminants by reducing the number of internal parasites.  Most shrubs contain tannins as do sudangrass, birdsfoot and big trefoil, sorghum, sulla, sainfoin, and sericea lespedeza.

In the first study, lambs infested with parasites ate more of a supplement that contained tannins than lambs with low levels of parasites. This behavior continued as long as parasite levels in the infested lambs remained high.  As the trial progressed, differences between groups became smaller and disappeared near the end of the study as parasite numbers in infested sheep declined.

These studies suggest: 1) lambs can detect internal parasite infestations, 2) they can learn about the relationship between the flavor of tannin and relief from internal parasites and 3) tannins can reduce parasite levels.

Lambs Learn to Use Tannins to Combat Parasites 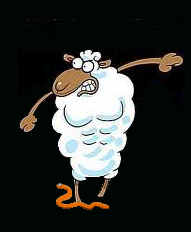 Lambs were then fed AT for two hours per day for 5 days. After conditioning, lambs with high levels of parasites ate more AT, had a greater preference for AT, and ate less plain alfalfa than lambs with low levels of parasites. After lambs were treated with a commercial wormer and parasite loads were reduced, the two groups of lambs ate similar amounts of AT. Eating AT reduced fecal egg counts. Lambs that had higher preferences for AT also had lower fecal egg counts by the end of the trial.

The results suggest that exposing a ruminant with high parasite loads to certain foods enables them to learn about the medicinal benefits of those foods. The ability of ruminants with high parasite loads to self-medicate with secondary plant metabolites like tannins, may be an alternative to routinely treating animals with commercial wormers and may reduce the number of parasites resistant to commercial wormers.

Lambs Learn to Take Their Medicine 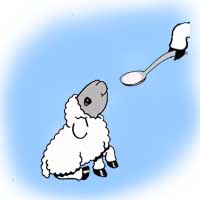 In the summer of 2009, graduate student, Udita Sanga, conducted a study to see if ewes can teach their lambs to eat polyethylene glycol (PEG) when eating a food high in tannins. PEG binds to tannins and lessens their harmful effects.

Lambs exposed with their mothers learned to eat PEG whether or not their mothers were familiar with the benefits of PEG. Lambs without mothers never ate PEG.  The interaction between mom and her offspring during feeding was important in getting lambs to use PEG regardless of the experience of their mothers.