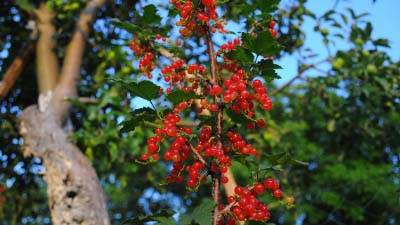 Red currants are hardy and relatively easy to grow in Utah. A few plants will produce enough to supply a family with plenty of antioxidant-rich berries. They are easy to tuck into a landscape and are a wonderful addition as a border plant or on their own in the garden. They can even be cultivated in a pot and added to a container garden.

Red currant (Ribes rubrum) is a member of the genus Ribes and part of the gooseberry family (Grossulariaceae). It is native to Western Europe and has long been cultivated in the United States. In the early 1900s, currants were banned in the northern United States to prevent the spread of white pine blister rust. However for most states, including Utah, the ban was lifted in 1966. Most red currant varieties are actually immune to the disease, with black currant being much more susceptible. This ban is largely the reason that consuming currants is not part of the U.S. culture, as it is in many areas of Europe.

Common and popular cultivars include ‘Red Lake’, ‘Perfection’, and ‘Wilder’. These cultivars are vigorous and produce red berries borne in clusters, which make picking easy. Most cultivars bear fruit from mid-June to July, and with some simple pruning they remain productive and are long lived.

Most cultivars are cold hardy to zone 3 or 4. Currants perform well in an area with morning sun, afternoon part-shade and good air circulation. Areas with poor air circulation increase the incidence of powdery mildew, a foliar disease. Air temperatures above 85 °F can cause damage to the plants, and intense sun can sunburn the leaves. Plants tend to bloom very early in the spring and should not be planted in a site that is prone to late frosts. Areas with winter shade, such as Northfacing slopes or on the north side of fences, are ideal for planting as they protect plants from late frosts by slightly delaying spring bloom.

Ideal conditions for growth include rich soils with good water holding capacity, but well drained. Silt and clay loams are ideal for growing and should be rich in organic matter. In heavy clay soils, incorporate organic matter and plant on raised beds to improve drainage and aeration. Sandy soils are prone to becoming warm and will require additions of organic matter and frequent irrigation. The ideal soil pH is 6.5, but currants are very adaptable to a range of pH and soil conditions, including alkaline soils. 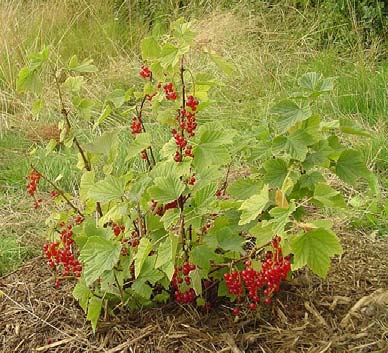 Currant bushes are usually about 3 to 5 feet tall and wide and the leaves have 3 to 5 lobes. Unlike gooseberries, a close relative, the canes of currant are smooth (no thorns), light yellow in color and do not bend at the tips. The flowers are green with a hint of purple and form on long racemes. The fruit has a smooth skin and a translucent-red color. Pink and white currants are color variations of the red currants. A well cared for plant can remain productive for 20 years

Currants are often sold as bare-root starts or as potted plants. Obtain either one- or two-year-old vigorous stock from a reputable nursery. Transplant to the garden either in the late fall, or early in the spring before the plants begin to grow. Incorporating some stable manure or a balanced fertilizer into the soil prior to planting will increase nitrogen and other nutrient release into the soil as plants establish. Set the plants slightly deeper than they grew in the nursery. Remove any damaged roots on bare-root plants and cut back the tops to 6 to 10 inches long. Space the plants 3 to 5 feet apart in a row with 8 to 10 feet between rows, depending on the vigor of the cultivar selected. After planting, spread a mulch of straw, wood chips, or peat around the base to control weeds and help keep the soil cool. Flowers that develop during the first year should be removed to promote strong structural and root growth. Allowing the plant to fruit the first year will result in poor plant development. Most plants are self-fruitful but can benefit from cross pollination, so a second plant of a different variety will improve fruit production. During the second year of growth, the plants should produce a light crop. Expect a full crop the third year.

Currants are heavy nitrogen feeders, and stable manure is a good fertilizer for red currants. Green manure or mulch can also be used. Young plants do not require heavy fertilization. For synthetic fertilizers, lightly broadcast about 1/4 to 1/3 pound of 10-10-10 or 12-12-12 fertilizer per plant each year to promote good growth.

Due to a shallow fibrous root system, currants grow well under drip irrigation. Drip irrigation also helps keep the canopy of the plants dry, reducing disease occurrence. Keep plants well watered with 1 to 2 inches of water per week until fruits are harvested, at this point they stop active growth and watering frequency can be reduced. Plants that are stressed for water are more susceptible to mildew.

Plants should be pruned in late winter or early spring during dormancy. Remove any damaged branches or branches that are contacting the ground. After the first year of growth, remove all but six to eight of the most vigorous shoots. At the end of the second growing season, leave four or five of the best one-year-old shoots. At the end of the third year, prune so that approximately three or four canes of each age of wood remain. By the fourth year, the three or four oldest canes should be removed to the ground and the three or four strongest new canes allowed to grow with the remaining new canes removed. Fruiting is strongest on two and three year-old canes. A strong and healthy plant should always have about eight bearing canes, with younger canes growing each year to replace the older ones.

Currant seeds easily germinate if stratified for three to four months at temperatures just above freezing. Seedlings are often prolific and will bear fruit when 2 to 3 years old but will not develop true to parentage and are genetically different from the parent plant. Propagation from cuttings ensures the new plant will be the same as the parent plant. Currants can be propagated from hardwood (fully mature, dormant wood taken in late winter) and semi-hardwood cuttings (partially mature wood of current season’s growth, taken midJuly to first freeze). Rootstocks are available, but there is no advantage to grafting.

A heavy mulch around each plant will help reduce weeds. Avoid cultivating near the plants, as currants tend to have shallow and fibrous roots that can be easily damaged. Keeping weeds clear around the plant will minimize competition and the currant plant will have improved performance. A spring application of pre-emergent herbicide, such as dichlobenil or oryzalin, will minimize annual weeds. There are several herbicides registered for use on currants. It is important to always follow the label closely. Glyphosate and fluazifop-butyl are effective for weed control, but caution should be used when applying systemic herbicides to insure that none of the herbicide comes in contact with leaves or stems of the currant bushes. Using a board to shield the plant while spraying will reduce the chance of damaging the bush. Wick applications can also be effective.

Currants ripen over a two-week period in mid-June to mid-July, depending on local climate, and change color to a bright red when fully ripe. Fruits develop in clusters that are easily picked from the two and three year old branches. Red currants have tender skins that will tear when picked. To avoid this and increase storage life, harvest the whole cluster at once. Fruit do not need to be harvested as soon as they turn red, as they hold well on the plant. In fact, for fresh eating, leaving the fruit on the bush for an additional 2 or 3 weeks after coloring will enhance flavor and sweetness. Depending on cultivar, mature plants should yield about 3 to 10 pounds per bush.

Red currant fruits can be used fresh in salads, jellies, drinks, and desserts. In Austria it is used as the most common filling in the Linzer Torte. It is often used to make wine and juices in Russia.

Fruits are a good source of potassium, manganese, vitamin A, B, and C. They are high in flavonoids, but low in calories and salt. They also boast high antioxidant levels and may help fight against various forms of cancer. 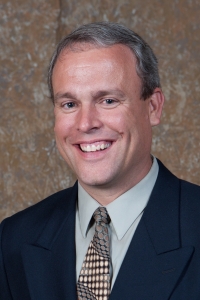