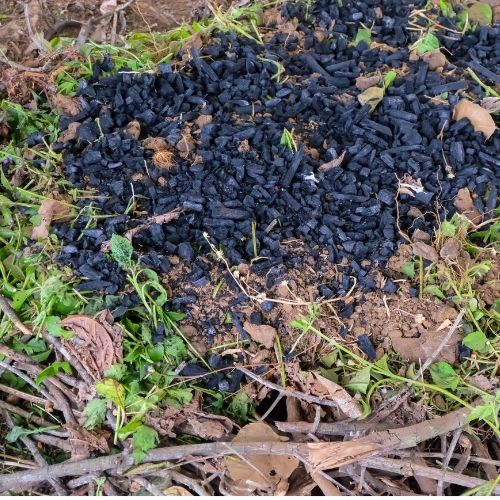 Biochar has shown to have long-term benefits for the environment in terms of sequestering carbon in the soil. But for intensive agricultural production, some factors need to be considered in applying biochar to the soil, such as current soil health, the source and production method of the char, and the variable or unknown application rates. In some cases, crop yield may be marginally increased, but this benefit might not outweigh the cost of the biochar itself. Recent studies in the western U.S., including one by USU Extension, have found mixed results for certain vegetable crops.

Biochar is a charcoal-like product made when biomass is slow-burned in the absence of oxygen in a contained system. This technology of burning is called pyrolysis. Biochar contains no petroleum, is made sustainably from biowaste products (herbaceous or woody crop residues, non-salvageable timber and slash, animal manure, and more), and for agriculture, is applied to the soil for long-term carbon storage and as an amendment.

It is predicted that at least 50% of the carbon in any piece of waste turned into biochar becomes stable, locking away that carbon into the soil for a period of several to hundreds of years, offsetting its contribution as a greenhouse gas in the form of carbon dioxide.

How does Biochar Change the Soil?

Biochar works on the soil similarly to organic matter. It does not contain any nutrients; it is the physical properties that provide the benefits. Biochar’s negative charge attracts positively charged plant nutrients (calcium, potassium, magnesium, etc.), preventing them from leaching out of the soil and making them readily available to the plant roots. In addition, the high surface area and porosity of biochar attract and hold water and provide a refuge for beneficial organisms.

The similarity of biochar to the organic matter found in terra preta soils led scientists to theorize that biochar application to other soils could be beneficial. “Terra Preta” (dark earth) is a dark and loamy soil found in scattered pockets of the Amazon. Those pockets of soil are widely believed to have been amended or mulched with charcoal waste from pre-Columbian Indian hearths thousands of years ago. Johannes Lehmann at Cornell University showed that the Terra Preta soils had higher nutrient availability, higher cation exchange capacity, greater water retention, and greater porosity/aeration than the native soil, resulting in improved crop growth.

Since Lehmann’s discovery, hundreds of studies have been conducted in the U.S. to try and replicate the results on plant and soil health. Trials in both agricultural soils and potted plants have shown mixed results. Where they occurred, some positive traits listed above were found, as well as:
• improved efficacy of fertilizers
• increased soil pH
• increased beneficial soil microorganisms including beneficial rhizobacteria and mycorrhizal fungi
• greater earthworm populations due to improved soil conditions

Because of the change in soil microflora, studies have examined whether biochar helps plants defend against soilborne diseases. Again, the results have been mixed, with some crop studies showing decreased plant growth. The negative effects may be attributed to temporarily high pH, toxins (resin, tannin, etc.) present on the char surface immediately after production, nutrient imbalances, or simply the crop species.

From 2015 - 2017, USU Extension investigated whether biochar as a soil amendment would improve crop yield and root rot-resistance of tomato and melon. For crop-yield comparisons, biochar (beetlekilled pine/375°C) was soil-applied in 2015 at a rate of 10 tons/acre at the USU Experimental Research Farm in Kaysville. Each year, we compared tomato and melon plant yield after a season grown in either biochar+fertilizer, fertilizer, or no amendment. We saw no statistically significant increase in yield from the biochar application; however, there were trends in the results:

The root rot-resistance comparison was conducted in a greenhouse where we grew tomato and melon transplants in potting soil that was either amended or not amended with the same type of biochar (2% rate by volume). After approximately 6 weeks of growth, half the potted plants were each inoculated with 20 rice grains coated in mycelium of a mix of Phytophthora capsici, P. nicotianae, P. cactorum, and P. megasperma. Plants were then grown with normal irrigation and fertilization for an additional 8 weeks. Plants were then rated for disease, weighed, and roots were tested for Phytophthora spp. with Agdia test kits. Disease was found on the inoculated plants in both soil types, and no disease was found on un-inoculated plants. This trial was repeated three times. We had hoped to see less incidence of disease on plants growing in the biochar soils, but instead, we found that:

If you are interested in trying biochar, note that purchasing commercially-prepared char for large applications is not economically feasible. The cost ranges from $400 to $2,000 per ton. Scaling that down to backyard gardeners is a slightly more acceptable cost, with bagged products ranging from about $25 - $40 per cubic foot (covering 100 - 350 ft2 ).

As an alternative, some commercial growers are investigating on-site production of their own biochar. There are many YouTube videos online, and local workshops. These sites also provide instructions:
• Learn to Make Charcoal
• Kiln Design Resources

How to Apply Biochar

Bagged or bulk products sold commercially have been tested and analyzed, and will provide application instructions. But for do-it-yourselfers, there are not currently solid application recommendations. If you decide to use your own biochar, note that studies have shown that applying raw biochar alone in poor soil has little benefit to plants and may retard growth for at least 6 months.
• Rinse raw biochar in water and then “charge” it by mixing it almost half and half with compost or with a fertilizer.
• The application rate depends on soil type and cropping system, and ranges from 2 to 22 tons/acre. Therefore, one option is to apply the lower rates over a period of 2-3 years to slowly build up the content in the soil.

Biochar is still a hot topic, as the number of charrelated scholarly publications have increased nearly five-fold since 2012. Indications suggest that biochar could play a role in improving sustainability in agriculture. But the challenges of cost, variability in biochar types and application rates, and how this technique can work with other soil health practices such as no-till, cover cropping, manuring, and mulching, still need to be addressed. Certainly, improved recommendations are coming, but a few years down the road.