Sage-grouse at the Southern Edge of Their Range

This research focuses generally on the ways in which topography, land cover, and climate impact the potentially threatened greater sage-grouse on their fragmented southern range margin.

Sage-grouse range and populations have been declining for decades. Along the southern edge of their range in southern Utah and Nevada, sage-grouse habitat tends to be fragmented and of lower quality than in the core of their range. These isolated populations are likely more prone to the effects of habitat loss and climate change. However, it is not clear to what degree each population is threatened by changes to their habitat. In my research, I am seeking to elucidate the ways in which sage-grouse use the landscape, including how they seek shelter from avian predators.

Much of the sage-grouse habitat lost has been due to pinyon-juniper forest encroachment. Those trees provide perches for avian predators and displace the sagebrush that sage-grouse need. We used data from GPS transmitters on >120 sage-grouse to evaluate how they respond to trees and other factors on the landscape. Despite the potential risk of predation, we have found that sage-grouse use areas close to trees when they can use moderately rugged topography and contiguous sagebrush patches, likely to block the sightlines of potential predators in the trees. This means that management actions, such as removing pinyon-juniper stands, should prioritize areas that are more open and with less sagebrush, where sage-grouse have little shelter. Further, we have found that the strength of this effect varies greatly across this range margin. 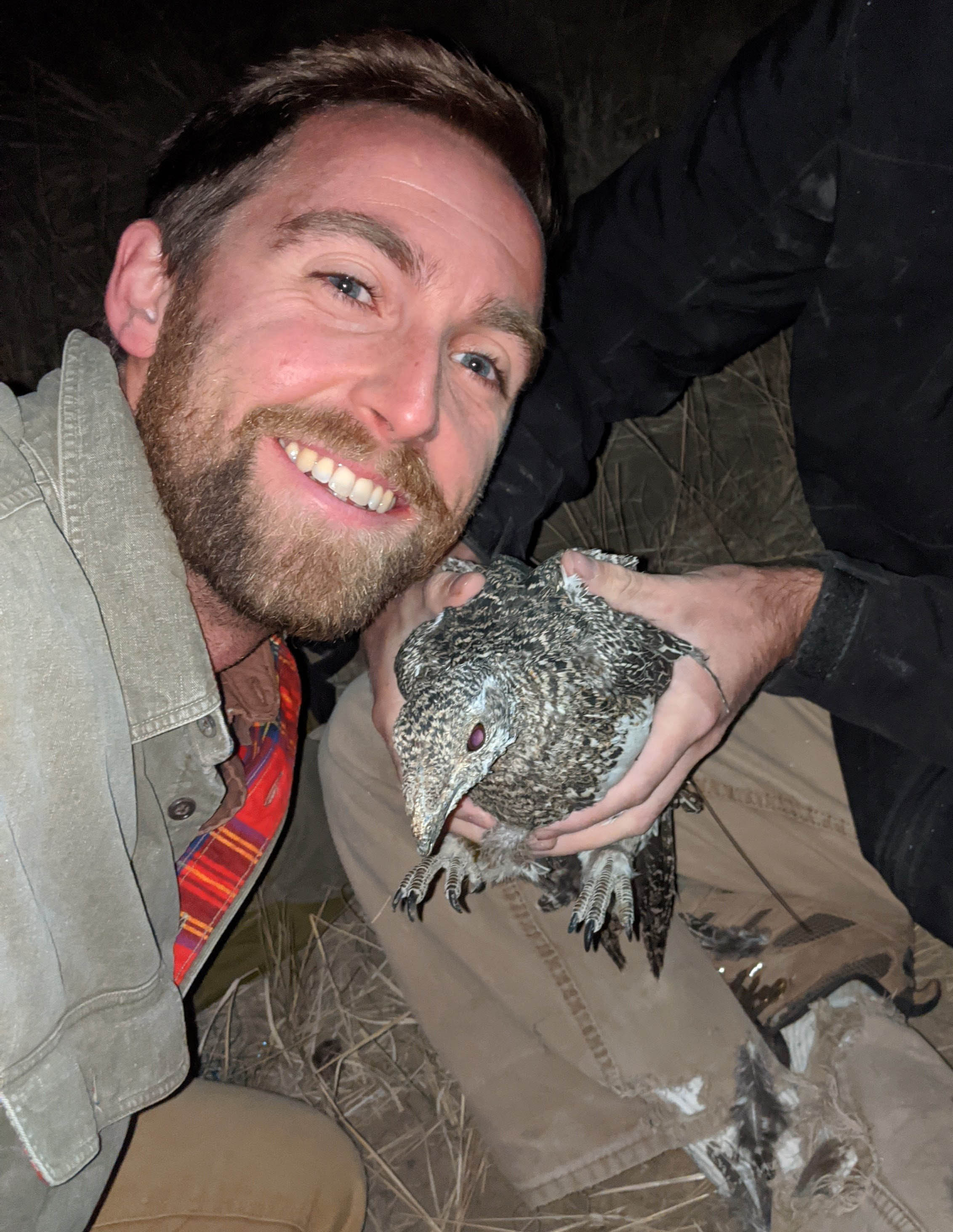 Individual sage-grouse make decisions at local scales, so their greatest perceived threat depends on their local landscape. A sage-grouse using an area very far from trees is unlikely to use rugged terrain and can more safely venture out of dense sagebrush. This suggests that conservation planning must account for local-scale conditions in addition to state or regional-scale drivers.

Biography: Aidan Beers is a PhD candidate in the Wildland Resources Department at Utah State University with a focus in Wildlife Ecology. He began the program in 2018. Aidan specializes in wildlife spatial ecology and habitat selection, using spatial data and a variety of statistical approaches, including machine learning, to address complex ecological questions of conservation concern. Prior to joining USU, Aidan worked with pikas in North Cascades National Park and Colorado, where he earned his Master’s degree in Ecology and Evolutionary Biology from the University of Colorado Boulder; with wolves in Yellowstone; and with brown bears in Alaska. Aidan anticipates completing his PhD at USU in 2021 and plans to continue to work in wildlife ecology, focusing especially in spatial, quantitative, and conservation problems.

Over the past few decades, raven populations have both expanded and grown throughout the West. Ravens are problematic predators for several sensitive species including the Greater Sage-grouse. A substantial amount of research has investigated ravens in sagebrush habitat and how they have impacted sage-grouse populations via nest predation. Studies show that ravens are more often found in areas that are closely associated with anthropogenic structures and activities including livestock grazing, pipelines, and roads. Zoë Moffett’s master’s thesis will fill in some of the gaps in our knowledge of how ravens inhabit sagebrush habitat and how their behaviors impact sage-grouse during different periods of the breeding season. The study will take place in the Bald Hill and Panguitch SGMA's in Southern Utah. Her project will involve roadside point-count surveys for ravens, the trapping and tagging of ravens (with cellular transmitters), trail-camera surveys on active leks to detect raven presence, as well as an artificial nest experiment in different sage-brush vegetation treatments. This project is in partnership with the Cedar City BLM office, Hawkwatch International, and with Utah State University.

Biography: Zoë Moffett grew up in the forests of Connecticut, before moving to Colorado where she got her B.A. in organismal biology and ecology from Colorado College. She considers herself to be an ecologist as she has a love for everything flora and fauna.

As an avid hiker/backpacker, she completed the Colorado Trail (~ 500 miles) in the summer of 2019. 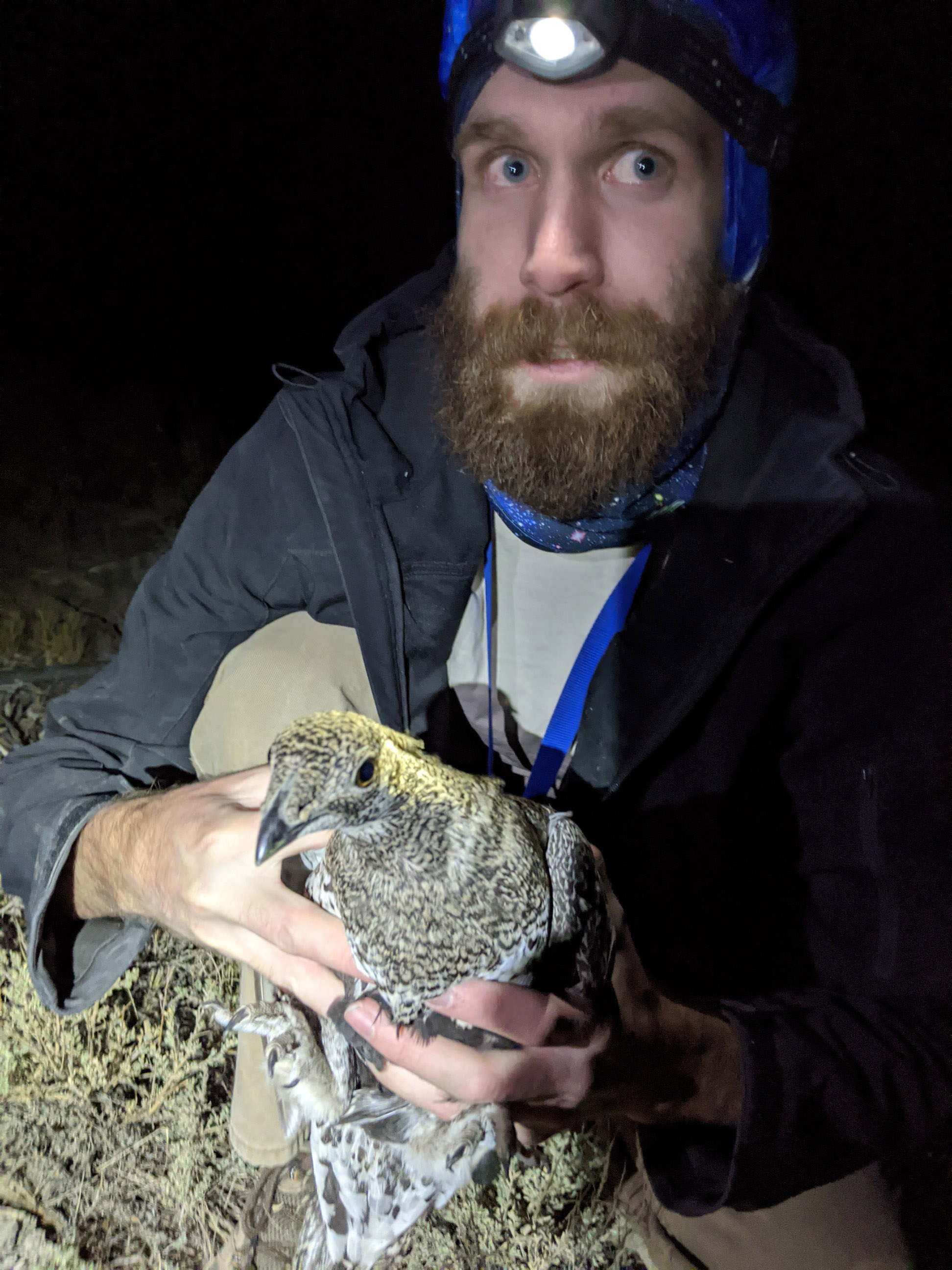 Ben is from Hamden, a small town in central New York. He obtained a B.S. in Biology from Ithaca College. Since graduating in 2013, he has had multiple job positions working with wildlife, including sage grouse in Southern Idaho, Black Rails in South Carolina, Fairywerns in Australia, and Yellow Crazy Ants on Johnston Atoll.

Ben can be reached at bdonnel2@gmail.com 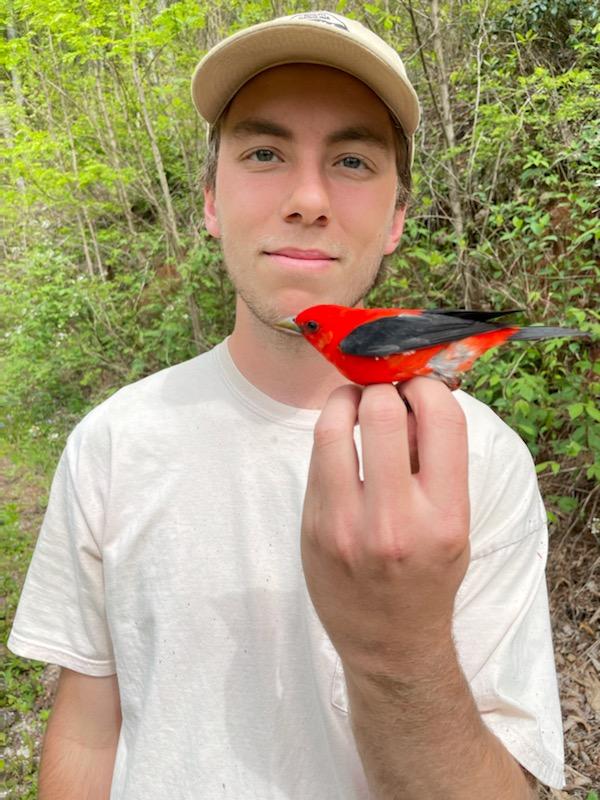 Blake Ledbetter’s current project is focusing on the Wildlife Crossing structure over I-80 at the summit of Parley’s Canyon to document species crossings, the timing, behavior, and nature of those crossings all while comparing the success of this crossing to other crossings that have been built. An additional part of his study is to find if this structure is effective in mitigating wildlife-vehicle collisions in this section of the canyon.

Biography: I started my wildlife journey in my hometown at Haywood Community College (a small college nestled in the Smoky Mountains of western North Carolina) and moved on from there to get my B.S. in Wildlife and Fisheries Science from The University of Tennessee. Shortly after, I earned my Associate Wildlife Biologist certification and got accepted as a Master’s candidate in the Wildlife Resources Department at Utah State University majoring in Wildlife Biology. Working with a wide variety of species from Douglas squirrels in Washington to Elk in North Carolina all the way down to endangered bats in Louisiana, I never really stayed in one place for too long. I held onto my passion for wildlife the whole way and never took life too seriously!

Due to the declining Greater Sage-Grouse (grouse) populations in southern Utah, the members of the Color Country Local Working Group combined efforts to study grouse in Long Valley, Utah. The study efforts were concentrated in Alton and Sink Valley to determine baseline data for this population. The Alton lek marks the southern-most lek of Greater Sage-Grouse in North America, but little else was known about them at the outset of this study. Using a Cost-share Agreement with the Bureau of Land Management, a study was created to determine movements and habitat use of this southern population of grouse.

To determine grouse habitat use and migration radio-transmitter collars were placed on grouse. Trapping began in March of 2005 using an ATV, spotlight, and nets, and was repeated each fall and spring to maintain a population of at least 12 birds during the rearing and dispersal seasons. Trapping was initiated in Alton and Sink Valley, but in 2006 the study expanded to include the northern Heut’s Ranch lek. Captured grouse were sexed, assessed for injuries, and fitted with a necklace radio-transmitter. Beginning in 2007, blood samples were taken from trapped birds for genetic research. The bird was then released on site. After allowing two days recuperation, we used radio-telemetry to track the movements of the individual birds. During the summer grouse were found three to four times weekly. From September to April grouse were located twice a week. Although triangulation was possible, the grouse were visually located. At each site the GPS coordinate was recorded (UTM, Nad83) along with the habitat characteristics, flock size, proximity to any visual predators, and other applicable information.

Grouse altered habitat types depending on the season (Figures 1-4). In the spring grouse typically used the areas immediately surrounding their lek in Sink Valley. These habitats included pastures, sagebrush, and pinion/juniper stands interspersed with sagebrush. A split occurred during brood rearing season when a third of the population flew three miles north to Alton while the rest remained in Sink Valley. Summering Alton grouse were found in the agricultural fields and nearby wetlands. The type of crop affected amount of grouse use. Sage-grouse preferred fields planted with alfalfa over those planted with triticale. This may be due to differences in insect numbers, water, and average plant height. Nesting habitat is unknown in Alton because a collared hen never nested there. In Sink Valley hens nested under sagebrush, and then moved chicks to horse pastures and wetlands. Sage-grouse tended to stay in brood-rearing habitat until September. Non-breeding females and males congregated in flocks that used both brood-rearing and surrounding habitats. During the fall both groups moved into typical, sagebrush-dominated habitat. In the early winter Alton grouse moved back to Sink Valley where the population utilized sagebrush flats, and brush-hogged pinion/juniper slopes.

Grouse appeared to be minimally effected by agricultural practices. In one instance, grouse flushed in front of an alfalfa thresher, and immediately resettled behind. Grazing cattle also didn’t seem to disturb the birds. Grouse were often flushed near or within herds of cattle. In one instance a female grouse was seen walking into the front yard of an Alton house.

The Hoyt’s Ranch males assembled on a forty male lek ten miles north of Alton. After breeding season the males scattered, and not all were accounted for. In 2006 one male flew six miles south to spend the summer on Sevy’s Bench, a large stretch of private property primarily managed for trophy buck hunting. The areas frequented by sage-grouse included a sagebrush/bitterbrush mix, and sagebrush/Gambel’s Oak. Brooding hens also used Quaking Aspen/sagebrush habitat. In the late fall and winter the male moved to a sagebrush/bitterbrush bench east of the lek until breeding season. One male was found predated on a sagebrush/pinion-juniper hill adjacent to alfalfa fields southwest of Hatch. The third male couldn’t be located until he returned to breed the next year. In 2007 four additional males were trapped and collared. Three of these males migrated to Alton or Sink Valley in the summer. One is currently unaccounted for. Two juveniles trapped in Alton/Sink Valley migrated north to the Hoyt’s Ranch lek and beyond in the winter, and then returned the following summer. Upon arriving in Alton many migrating grouse were preyed upon. Currently only two of these birds remain. With new trapping conducted with have study population of 8 birds. 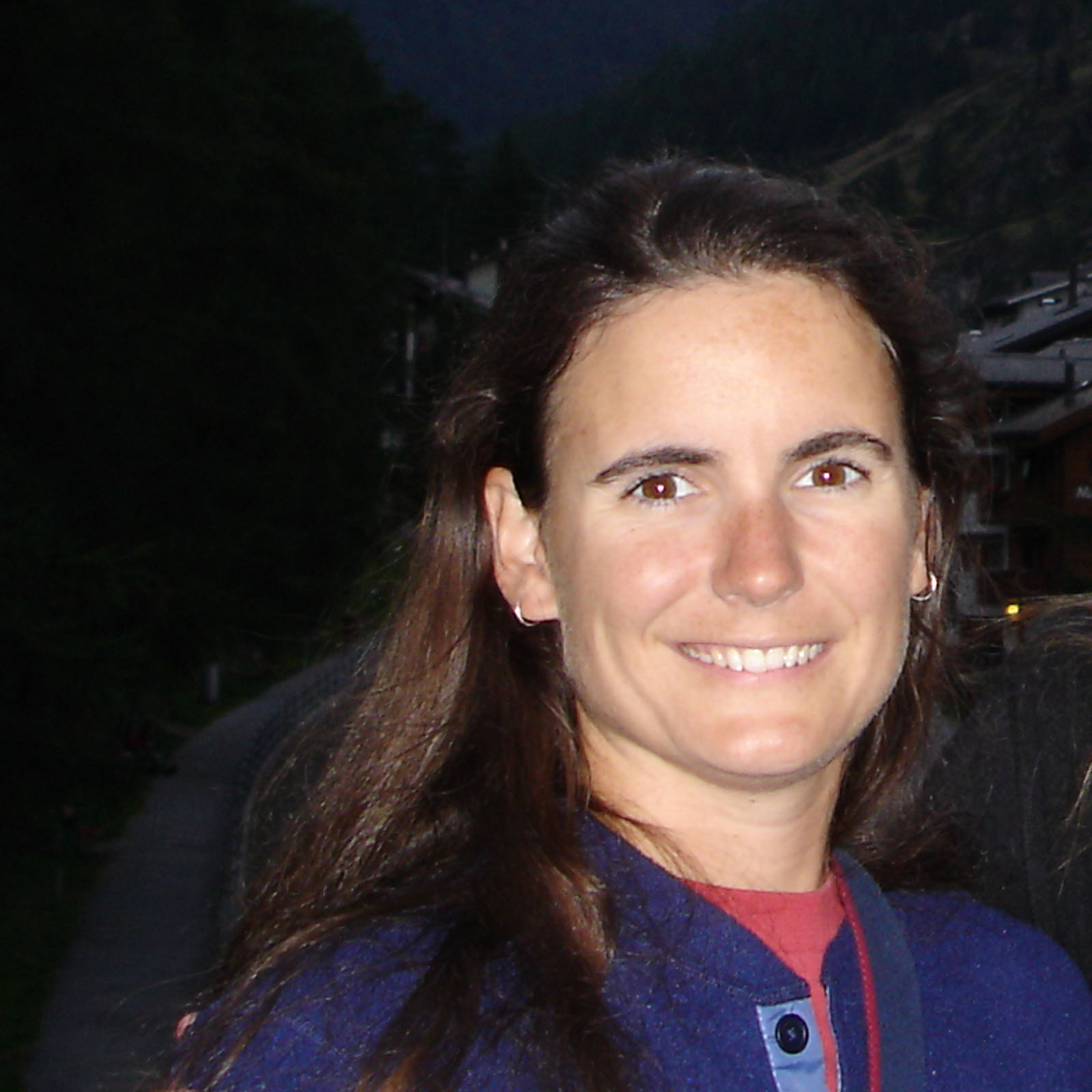 Biography: Nicki Frey graduated West Virginia University with a BS Degree in Wildlife Managementin1996. In 2001, she obtained her Master’s degree in Wildlife Biology at Utah State University, working on the affects of predator removal on ring-necked pheasant recruitment. Nicki completed her PhD in Wildlife Biology at Utah State University in September 2004 where she conducted research on the interactions between red foxes, raccoons, striped skunks, their use of a corridor environment, and the effects of management on predator populations. Nicki began working for USU Extension and Jack H. Berryman Institute in October 2004, to focus on solving wildlife management issues in southern Utah as the Assistant Extension Wildlife Specialist. She teaches Principles of Natural Resource Management at Southern Utah University, is involved with 4-H, at the national and state level for the Wildlife Habitat Evaluation Program, and serves as the Continuing Education Coordinator for the Jack H. Berryman Institute. In this role, she consults with Wildlife Services employees concerning Wildlife Biologist certification as well as providing them with academic opportunities.