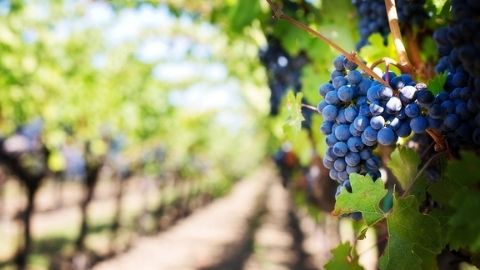 Grapes can be an excellent addition to home gardens and a revenue opportunity for small-acreage farms. Utah’s Wasatch Front region, along with portions of Cache Valley, are well suited to grow grapes, particularly the more cold-hardy cultivars. Many new cold-hardy cultivars have been introduced over the last few decades, including both wine and table types. However, many of these newer cultivars have not been adequately tested in Utah’s unique climate.

The trial was planted in 2014 and 2015 and included 19 cultivars primarily focusing on table grapes, but some hybrid wine cultivars were also included. The cultivars tested were primarily from breeding programs in New York, Arkansas, Wisconsin, and Minnesota. They were primarily sourced from Double-A Vineyards (www.doubleavineyards.com) and Amberg Grapevines (www.amberggrapevines.com), both in New York State. Thompson Seedless was sourced from the Foundation Plant Services Grape Program at the University of California, Davis (UC Davis). All plants were own-rooted (i.e., un-grafted). The evaluation planting, located around the Show Barn at Thanksgiving Point Institute in Lehi, Utah, consisted of randomized, replicated plots where each cultivar was planted in 3–4 replicate plots with 3–4 vines per plot. Individual vines were spaced 8 feet apart in the row, with about 8 feet between rows. All vines were trained to a spur-pruned bilateral cordon system. For more information on grape pruning and trellising, see the Utah State University (USU) fact sheet, Grape Trellising and Training Basics. For more information on general grapevine care, see the USU fact sheet, Grape Vine Management.

Plants were drip-irrigated twice weekly during the growing season. Soils in the planting areas consisted of compacted loam or sandy clay loam, with pH ranging from 7.5 to 7.9, and salinity ranging from 1.20 to 2.62 dS/m. Although typical for Utah, the pH is considered high and the soil salinity is higher than optimal for fruit crops. The soil salinity threshold for grapes is 1.5 deciSiemens/meter (dS/m) with 10% losses at 2.5 dS/m. All plants were treated once annually with an EDDHA iron as a soil drench under the dripline before bud break in the spring. Each plot was evaluated for survival, fruit yield, and fruiting season from the 2018 to 2020 growing seasons.

Vine survival was generally good for the majority of cultivars included (Table 1). The lowest survival rates were for Delaware and Marquette at 50%, followed by Edelweiss and Swenson Red at 62% to 64%. Thompson Seedless and Alden fared a bit better at 73% and 75% survival, respectively. Thompson Seedless is a European cultivar (Vitis vinifera) and was not expected to perform well in this trial as vinifera cultivars are generally less cold hardy than hybrids, and it was the least hardy cultivar included (USDA hardiness zone 7). Although extreme cold does not necessarily kill V. vinifera cultivars outright, it often kills flower buds and canes. We did not see bud damage or cane dieback in Thompson Seedless at this location. In general, survival was not related to cold hardiness, as Marquette, Edelweiss, and Swenson Red are considered to be among the most cold-hardy cultivars.

Five Swenson Red plants died suddenly in the middle of the 2018 and 2019 growing seasons from different locations in the trial (Figure 1). Although the exact cause of death was not determined, this type of mid-season collapse is often due to root diseases. With compacted and loamy soils, drainage is slow and variable and more conducive to soilborne root pathogens such as Phytophthora, Pythium, and Verticillium. 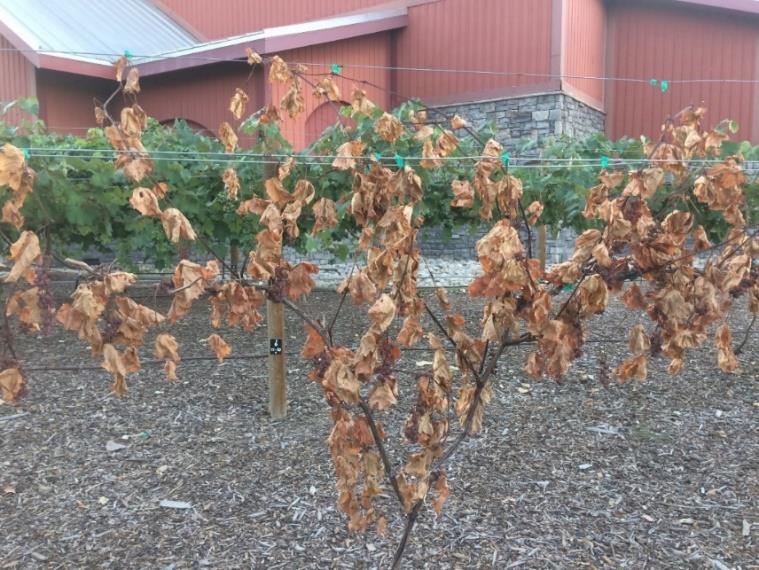 Although Alden, Beta, and Bluebell had good survival (75%, 100%, and 80%, respectively) they had the most problems with iron chlorosis. Bluebell did not recover fully even after treatment with iron chelate, while Alden and Beta recovered well with treatment. Iron chlorosis in grapes is common in alkaline soils and severity can vary widely among cultivars. For information on managing iron chlorosis, see the USU fact sheet Iron Chlorosis in Berries. Low vine vigor has been noted within replications on several cultivars but is inconsistent among plants within a cultivar and even within a replication. Low vigor often indicates poor adaptation, likely due to soil compaction and high soil pH.

Yield, harvest season, and fruit characteristics are shown in Table 2. The top four most productive cultivars were Marquis, Himrod, Jupiter, and Valiant at 31.1, 23.8, 21.0, 19.3 pounds per plant average, respectively. The first three of these cultivars are also seedless, making them excellent choices for fresh eating and raisins. Marquis and Himrod are white/green grapes and are excellent replacements for Thompson Seedless as they are similar, hardier, and a lot more productive in our trial. Jupiter is also noteworthy as an outstanding seedless purple cultivar, more productive and earlier-ripening than Concord, with a long harvest window. The grapes stay firm and flavorful on the vine for about three weeks for excellent fresh consumption, juice, and raisins. Valiant is great for juicing and is an excellent replacement for Concord as it’s more productive and ripens an average of three weeks earlier than Concord. The appendix shows a typical fruit cluster from each cultivar in the trial.

Note. Harvest dates can be plus or minus up to two weeks from the average date due to seasonal variations.

cBased on 8-foot in-row and between-row spacing which equals 681 plants per acre.

dDegrees Brix, or °Brix, is a measurement of fruit sugar content. The higher the number, the more sugar the fruit contains.

Pests and diseases have been minimal, and except for the sudden collapse of some Swenson Red plants previously noted, no diseases were noted, even on the Thompson Seedless which, as a V. vinifera cultivar, should be more susceptible to both powdery and downy mildew than the other cultivars in the trial.

Grape leafhoppers and birds were the two pests of major concern. Western grape leafhopper (Erythroneura elegantula) infestations tended to be relatively isolated to locations nearest the Show Barn on all sides of the vineyard, but were not widespread. Grapes can normally handle fairly high numbers of leafhoppers without being affected, and these primarily late-season pests didn’t affect yield. Monitoring occurred throughout the season to determine necessary control measures such as basal leaf removal or insecticide sprays.

Birds pose a major threat and will do significant damage at harvest time in the vineyard. As noted in Table 2, we had fruit on some cultivars completely eaten by birds (primarily the American Robin (Turdus migratorius) and European Starling (Sturnus vulgaris). Both of these bird species are known for removing the entire grape instead of just puncturing the fruit, as was the case in our vineyard.

Apply bird netting about two weeks before harvest, or when birds move into surrounding trees and their activity in the vineyard increases. Apply nets completely around the vines, closed at the bottom and ends. If installed early enough, nets provide an extremely effective control measure for birds.

This project is funded in part by a 2014 Utah State University Extension grant. The information reflects the views of the author(s). 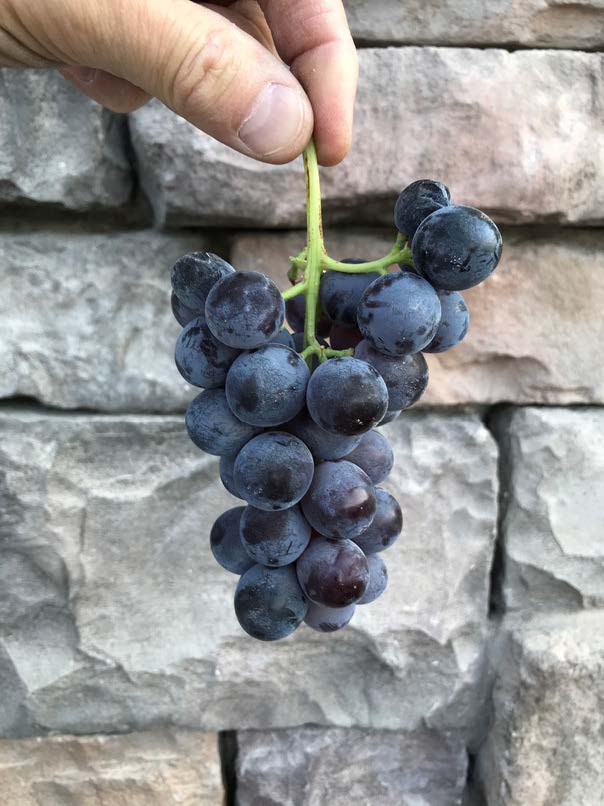 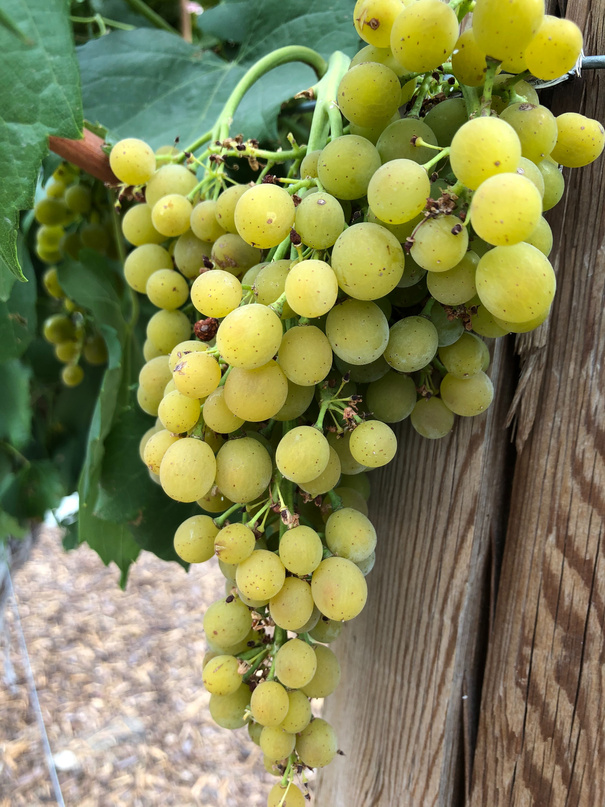 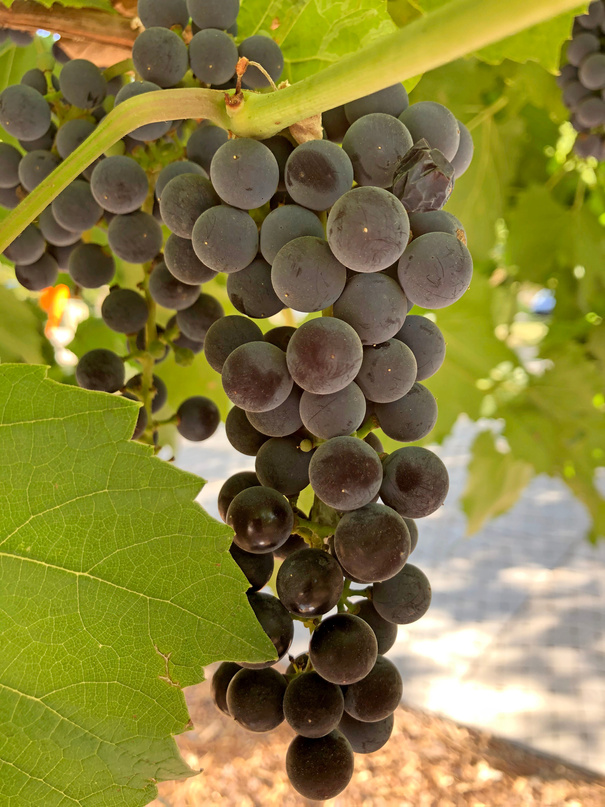 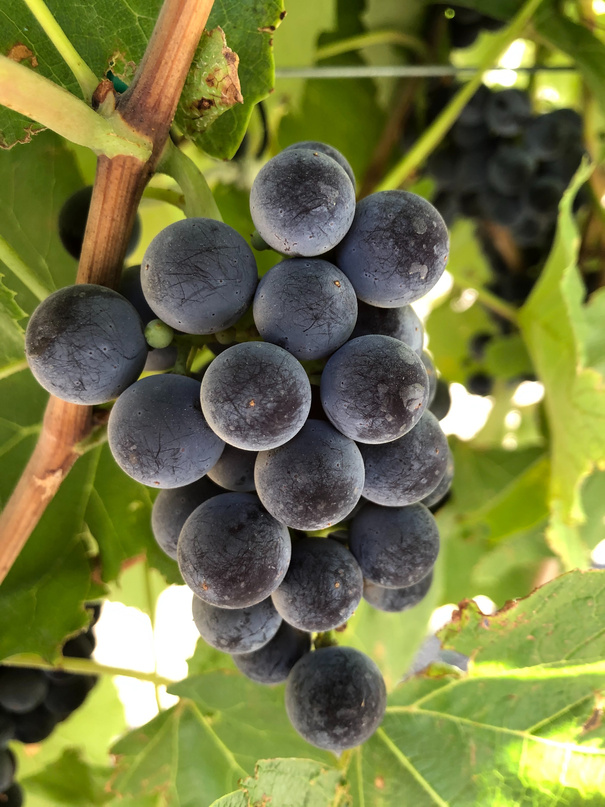 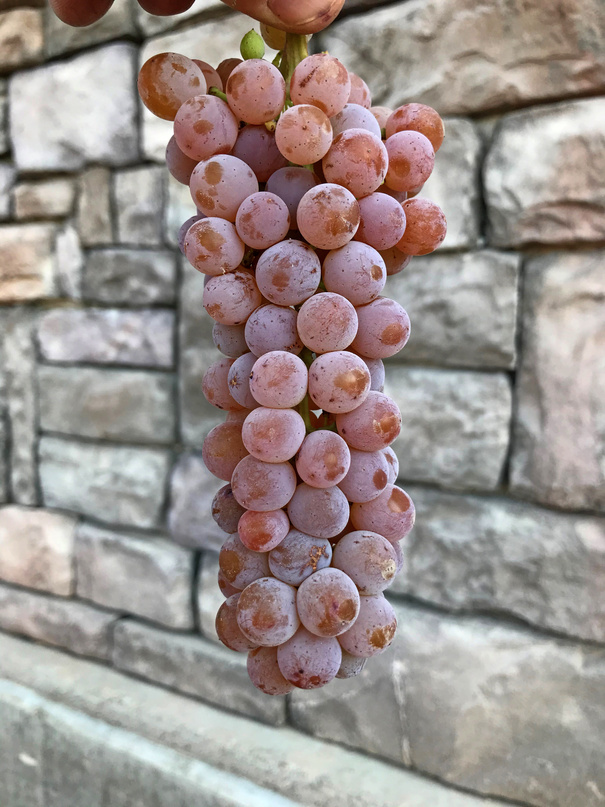 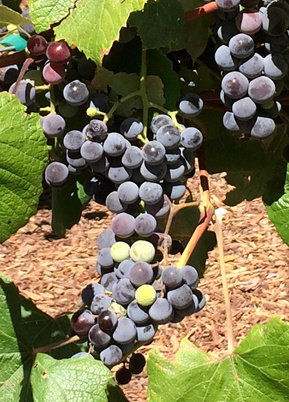 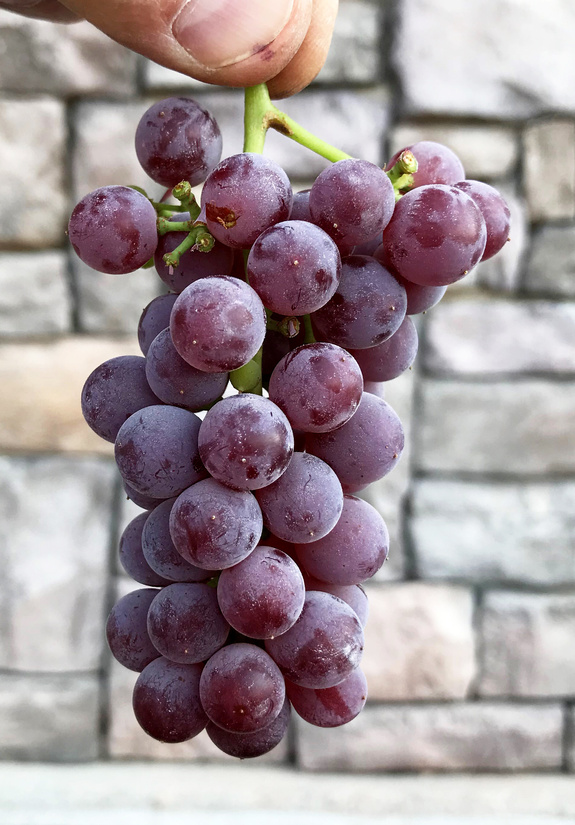 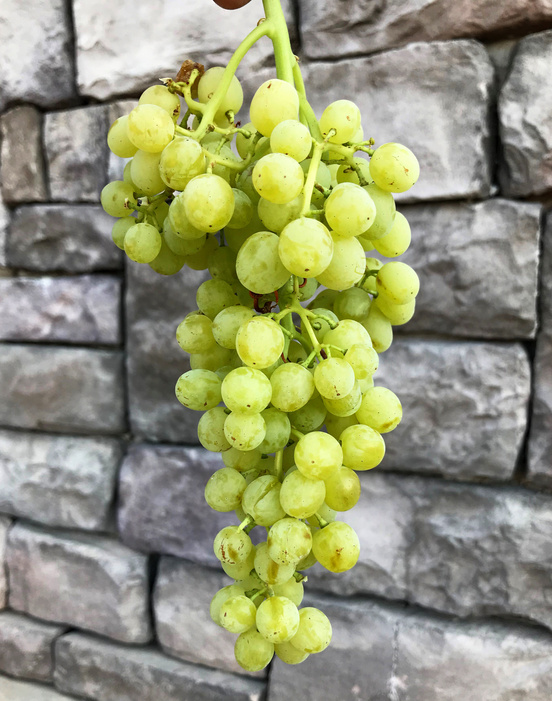 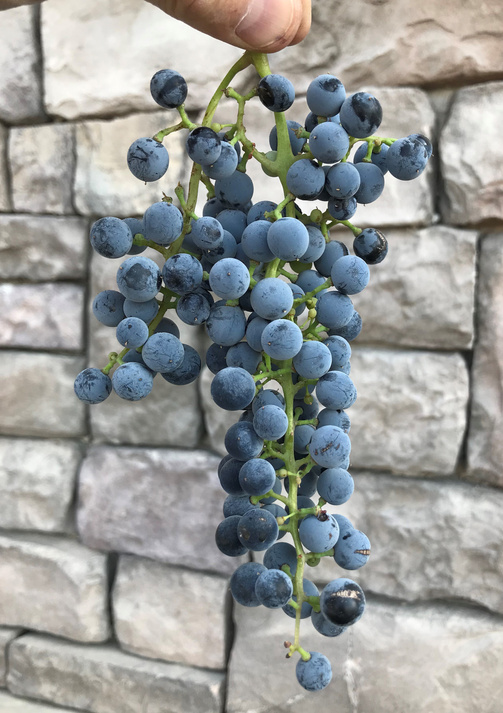 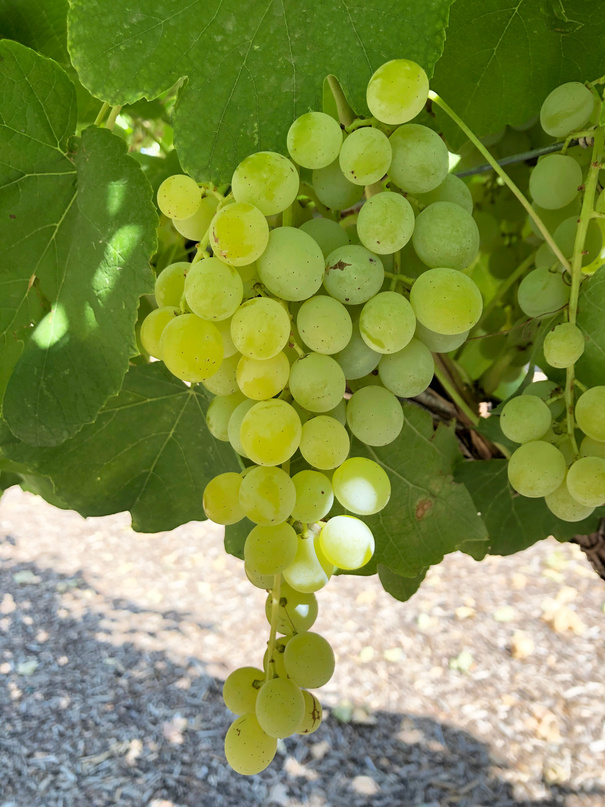 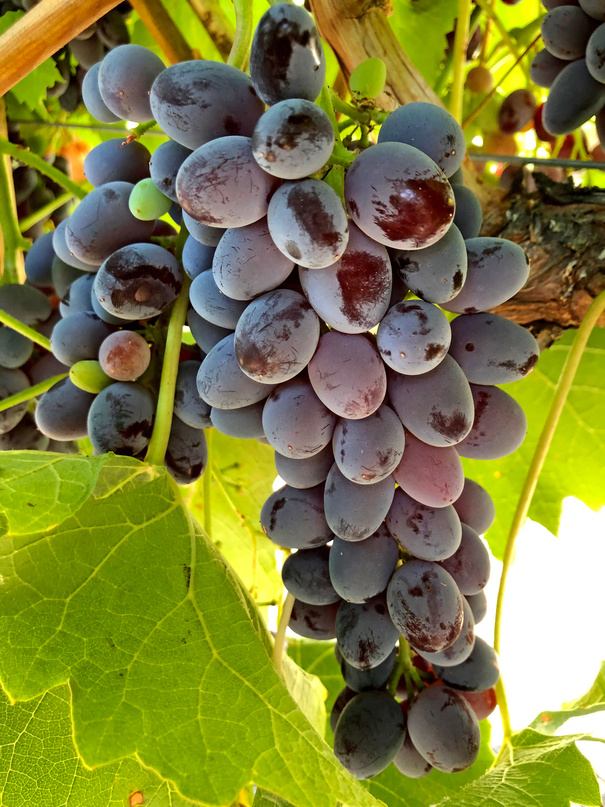 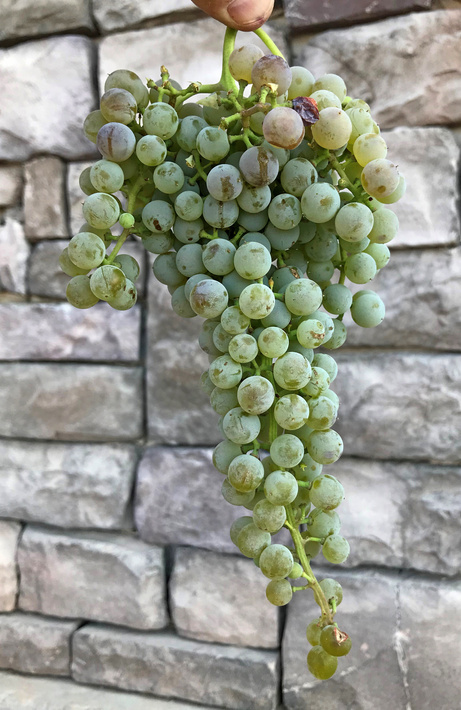 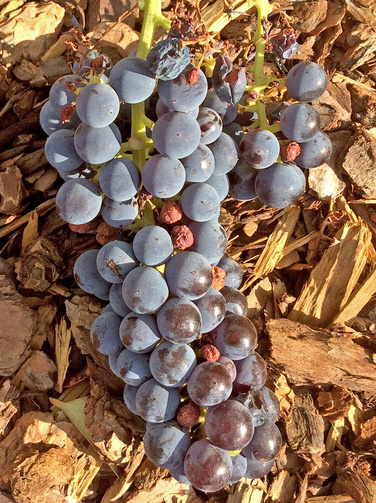 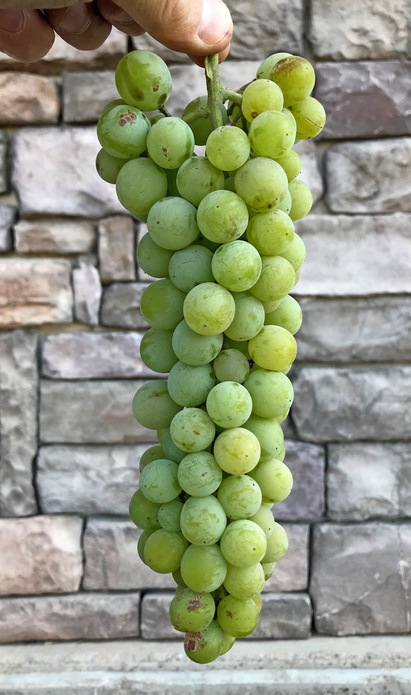 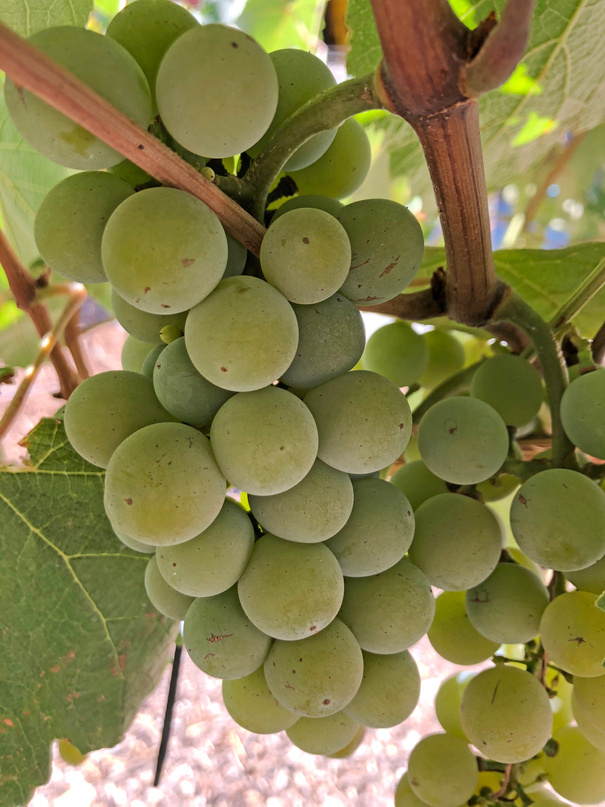 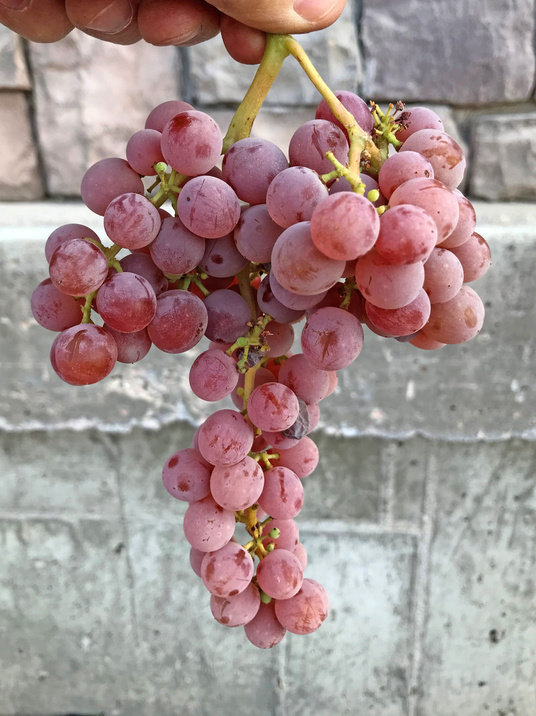 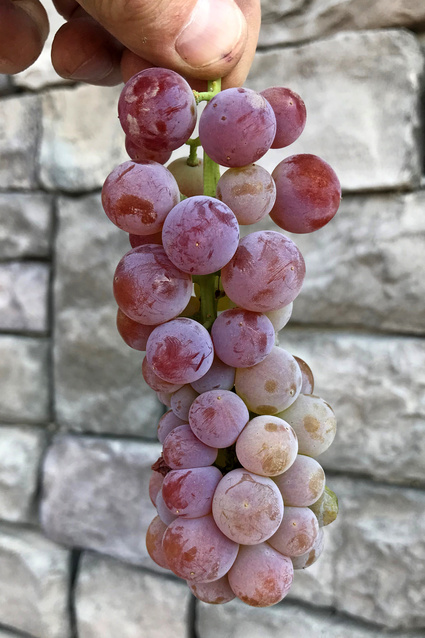 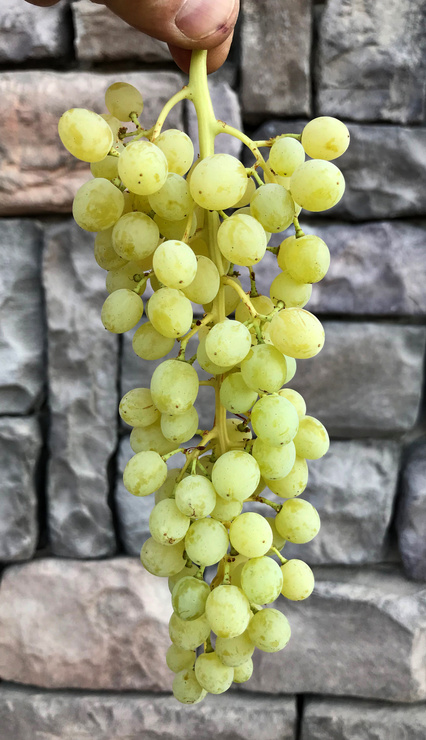 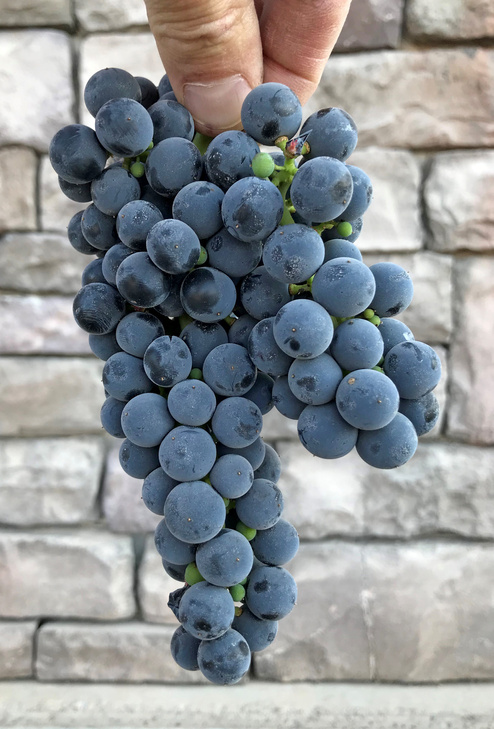