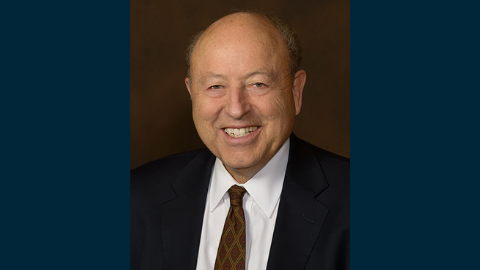 The award is presented annually to honor individuals, businesses or organizations outside of Extension for their outstanding support and personal involvement in furthering Extension efforts.

“Sen. Hillyard has been a tremendous supporter of Extension programs for 35 years,” said Ken White, USU Extension vice president. “His support for 4-H, the Utah Marriage Commission, the School of Veterinary Medicine and general Extension programming has been invaluable to us.”

Hillyard grew up in Cache Valley and graduated from USU and the University of Utah College of Law. He was a Utah State Senator from 1985 to 2020.

When asked if there is an Extension program that stands out to him, Hillyard said he is a great fan of the Saturday morning KSL Greenhouse radio show.

“I listen to it all the time and have heard many favorable comments from people across the state who follow the program and appreciate the great job the Extension horticultural people do,” he said. “Although we don’t live on the number of farms we once did, people in Utah have deep nostalgic feelings for gardens, homemaking and the many programs Extension provides, so it’s easy to get support for it, not only in Cache Valley and rural areas, but in Salt Lake City as well.”

Hillyard said a number of years ago when there were budget shortfalls, the staff was charged with looking through all the budgets and finding programs to cut. When they looked at higher education, one of the programs put on the table to be cut was USU Extension.

“People from USU called me and asked what they could do about it,” Hillyard said. “I told them to contact their Extension supporters and have them let their legislators know how important Extension is to them in their lives. We were absolutely swamped with calls! I remember walking into the Senate Chamber one day and a senator from West Valley told me his phone had been ringing off the hook from both kids and adults who rely on Extension.”

Hillyard was a sponsor for the 4-H Initiative, which has had a significant impact on funding for Extension youth programs.

“When I presented that bill at the legislature, every committee and group I talked to said how much they love 4-H,” he said. “They mentioned how it has impacted their lives, their children’s lives, their neighbors’ lives and many others. It was a really easy bill to get funded.”

Hillyard was also on the Utah Marriage Commission and was instrumental in helping USU get the contract to be the online provider for divorce education courses. A lawyer by profession, Hillyard said he has done a lot of domestic work.

“I see a lot of people who have problems but don’t want to go see a counselor,” he said. “But when you put it online and can access it in the comfort of your home and talk about it, it’s not quite as challenging as making an appointment and going to an office and visiting there. We’ve got some great people at USU who run these programs and have the capacity to provide it to a statewide audience. I think that is the mission of Extension, and I think they do it very well.”

Hillyard said if the goal in life is to make money, then all we would have is vegetable gardens and no rose gardens.

“Rose gardens add to our life with their beauty,” he said. “I think Extension does that for people. It helps them not only learn how to raise crops, gardens or animals or learn to make clothes and other things, but it makes them feel better about themselves and helps them be more fulfilled. Every time I could help Extension I was glad to do it. I’m glad to have the good friends I have at USU.”

White said Sen. Hillyard has truly been a champion for USU Extension.

“Many of our programs exist because of his dedication and support for well over three decades,” White said. “Because of his commitment to our Extension programs and the people of Utah, he was a natural fit for the Friend of Extension Award.”