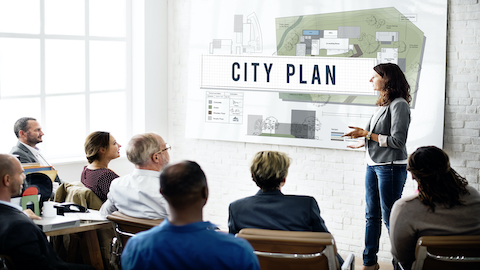 Susan Madsen, founding director of the UWLP and inaugural Karen Huntsman Endowed Professor of Leadership in USU’s Huntsman School of Business, said that compared to state and county governments, municipality cultures tend to be more masculine, and often have fewer redistributive or “feminine” roles. These includes services, such as education, social services, healthcare and the arts, and reallocating money.

Brooke Smith, graduate research assistant for the study and master’s candidate at Southern Utah University in the interdisciplinary studies program, said that while women have made great strides in assuming more prominent roles in local government, the number of women in Utah at the most senior levels of government management (mayors, city council, city managers, department directors, etc.) has remained considerably low over time.

Smith said a report by McKinsey & Company, Women in the Workplace, states that the biggest obstacle for women advancing in their careers is what they term the “broken rung” – that first step up from an entry-level position to a manager.

“That first missed promotion in local government can wind up holding women back for the rest of their careers,” she said, citing from the report. “Another explanation is that city councils and the mayor typically hire city managers. According to the data we collected, there are 43 female mayors and 240 male, or 17.9% female, and 310 female city council members and 1,098 men, or 28.2% female. So, it’s common for a female candidate to walk into an interview with an all-male or majority-male interview committee.”

The study showed cities with the highest percentage of women leaders include Marysvale at 83.3%, followed by Castle Valley, Dutch John, Helper, Rockville and Trenton, each at 66.7%. The next highest group, with 62.5%, includes Boulder, Goshen, Hanksville, Moab and Scofield. Cities with the lowest percentage of women in leadership include Naples (6.7%), Roosevelt (9.5%), Cedar City (10.6%), Woodruff (12.5%), St. George (13.0%) and Vernal (13.6%). Several cities had a 14.3% share of women in leadership, including Loa, Plain City, Toquerville and Virgin.

“Local government is really where the rubber meets the road,” she said. “It's important that we have a diverse group of people making decisions that are reflective of the population as a whole. Additionally, city leadership is a fantastic opportunity for women and men to serve their families, neighbors and communities.”

Madsen said a recent Gallup poll found that 72% of Americans have a “great deal or a fair amount of trust in their local government,” which is strikingly different from their trust in state and national governments.

“With that trust should come fair representation,” Madsen said. “Diversity in government leadership conveys to the community that a range of interests, experiences and priorities are being represented, which is why this groundbreaking research is so important. It's hard to know if we're progressing if we don't know where we’ve been.”

The research study can be found at: https://www.usu.edu/uwlp/files/briefs/25-status-of-women-leaders-in-government-utah-cities-towns.pdf.