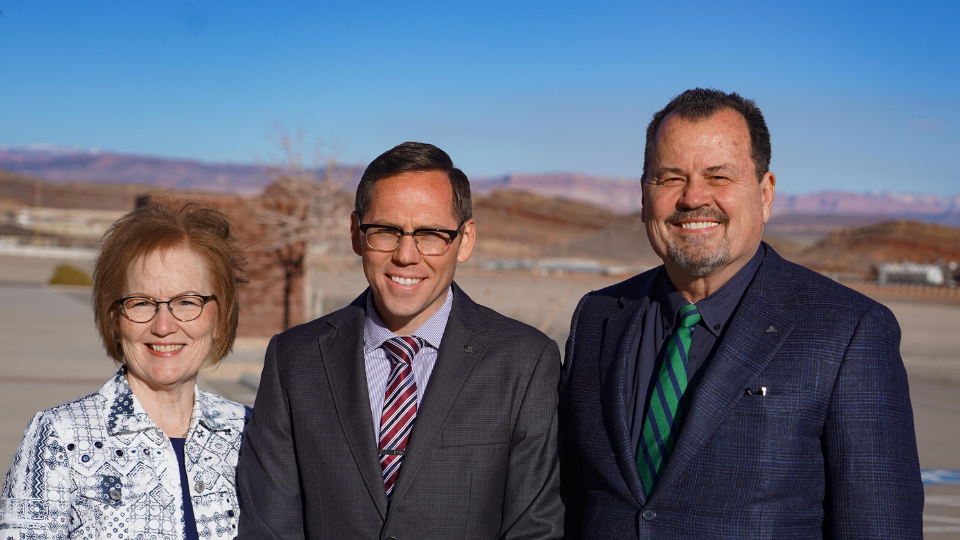 Paul Hill has been told more than once in his life that he couldn’t do something or that he shouldn’t try, but those comments are the very things that have spurred him on, both educationally and professionally. Hill was recently promoted to the rank of full professor at Utah State University Extension and works out of Washington County.

As he delivered his inaugural professor lecture, Hill said it all started for him when he was in the Head Start preschool program. He was always the last child out to the playground because he was inside playing with building blocks. Once outside, the low-riding tricycles he wanted were always taken, so he decided to try the chainless, high-wheel bike since it was always available. His teacher discouraged him, saying he would get hurt and that kids didn’t ride that bike because it’s too hard. While he appreciated her concern for his safety, he felt like he could do it, and when she wasn’t looking, he taught himself.

“Luckily for me, she was so impressed that I could do it, and she even called my mom to come and take a photo of me on the bike,” he recalled. “Just because it hasn’t been done before, doesn’t mean you shouldn’t try.”

Hill said it was always his dream to earn a doctorate degree, but where he lived, his age, and other factors seemed to get in the way. In 2016, he finally applied to USU’s only distance doctoral program offered through the School of Teacher Education and Leadership, but was rejected. He knew his writing abilities were strong, but his quantitative abilities were below par. Hill didn’t let rejection stop him, and he honed his skills, made connections, and was later accepted into a new doctoral program in Career and Technical Education offered through USU’s Department of Applied Sciences, Technology, and Education. He graduated summa cum laude, and his dissertation was a quantitative analysis of the factors explaining remote work adoption in the United States.

“If someone tells you can’t do something you want to do, let their statements motivate you,” he said.

Hill has always had an interest in technology, and in 7th grade, he set up a Hotmail account and was the first email user in his school. When he began working for USU Extension’s 4-H youth program in 2011, he transferred his love of technology to the youth he worked with.

“The ambitions of youth drive me to provide them with as many opportunities as possible, especially the ones they don’t always recognize by themselves,” he said. “I saw they were interested in coding, and I didn’t know how to do it, but I found volunteers who were willing to teach them.

Hill said they went on to form 4-H computer science and robotics clubs, with the 4-H Prestidigitaters and T.W.C.A. robotics clubs competing in world robotics championships through FIRST® (For Inspiration and Recognition of Science and Technology). In addition, Team NASA, the first 4-H robotics club from the town of Hildale, finished in the top three of the Utah South FIRST® Robotics State Championship in 2019.

“This is significant because the club members are from Hildale, a former isolated community,” Hill said. “They didn’t know their lives could be changed by learning these technical skills. They were able to have success against kids who had access to all things related to technology. These 4-H youth had been held back, and it’s amazing to see where they are now because of their experiences and how they have thrived, and gained confidence. It’s been inspiring to watch!”

In 2012, an experienced Extension professional said to Hill, “Sorry to tell you this, but computer science is not 4-H. We don’t do that – 4-H is cows, plows, and sows. Keep looking for other ideas for 4-H.”

Again, not to be daunted, Hill forged ahead. He recognized the impact computer science was having on the youth in Washington County. In addition, he identified computer science education as a legitimate community need through a systematic needs assessment.

“We created an event called Code Camp, and 48 youth competed the first year. They developed a passion for programming and realized there was a career pathway in computer science,” he said. “We also realized that girls and minorities were very underrepresented in computer science, but these programs have helped them increase drastically in STEM knowledge, skills, and aspirations for the future. Now hundreds of youth participate in computer science each year and some have graduated in computer science and now work for large tech companies and in other STEM careers. One started a software company with her husband. These girls and women are inspiring others to follow. It’s been incredible.”

Hill said the Utah 4-H program, which he was once told did not include computer science, now leads the nation in computer science. When the National 4-H Council announced a $6 million collaboration with Google to bring computer science education to underserved youth across the country with a new Computer Science Pathway, USU Extension’s 4-H program served as a key partner in co-creating the computer science curriculum and developing tools for educators to implement the program.

Hill is a recipient of the Utah Governor's Medal for Science and Technology, has served as a Maker Ambassador to the White House, and was recognized in 2021 as one of Utah's top 40 under 40 by Utah Business Magazine.

He has learned the value of bringing innovators together and has worked in the circles of those who deliver technology and information to those who need it, which led him to another chapter in his career – the Rural Online Initiative (ROI).

“Commissioners know the needs of their counties better than anyone,” Hill said. “The idea for ROI came from a Piute County commissioner who said there were not a lot of jobs in his county, but great internet service. He wanted to leverage the internet, train people to work remotely, and connect them with jobs so they wouldn’t have to move away.”

Hill was given the idea and tasked with building a program that would address the issue. In 2018, the idea went to the Utah legislature, which unanimously passed House Bill 327 implementing the ROI program. He immediately hired his team and went to work teaching people the research-based best practices of remote work and how to find remote jobs.

“I shouldn’t be shocked, but just like I was when kids showed up for computer science and robotics, I was shocked when people showed up for ROI!” he said. “But the model was so good. People want remote work, they want to live in their rural communities, and it was our job to help them figure out how. We interviewed program participants who were working for peanuts at the gas station. One said, ‘I just want to go on a vacation and be able to pay for my kid to play football.’ He is now working for a tech company out of Dallas, and he gets to go on vacation regularly. It’s amazing!”

Hill said there are now 306 people placed in the program – that they know of. That’s a lot of individuals and families in rural Utah who now get to enjoy a higher quality of life.

Before the pandemic, who could have guessed that millions of people would be working from home? Hill’s vision brought about the Rural Online Initiative (ROI) as a way to bring more jobs to rural Utah counties, and since it was already in place when the pandemic hit, it wasn’t foreign to people. The program has now transitioned to the Remote Online Initiative. Its affiliate program is now being delivered in eight other states.

“The first time I met Paul, it was in the old (since burned down) Washington County Extension building,” he said. “I walked in and saw all these little kids dressed in white lab coats running around. They were building computers and robots for an upcoming competition. I knew immediately we had a winner in Paul.”

“I truly respect him for his motivation, drive, and intent to serve the people of Washington County and the state of Utah,” Memmott said.

Hill has proven that if you ever get told something can’t be done, you should still try. And if you build great programs, people will come.

Hill resides in Hurricane with his wife Katie and their four sons.