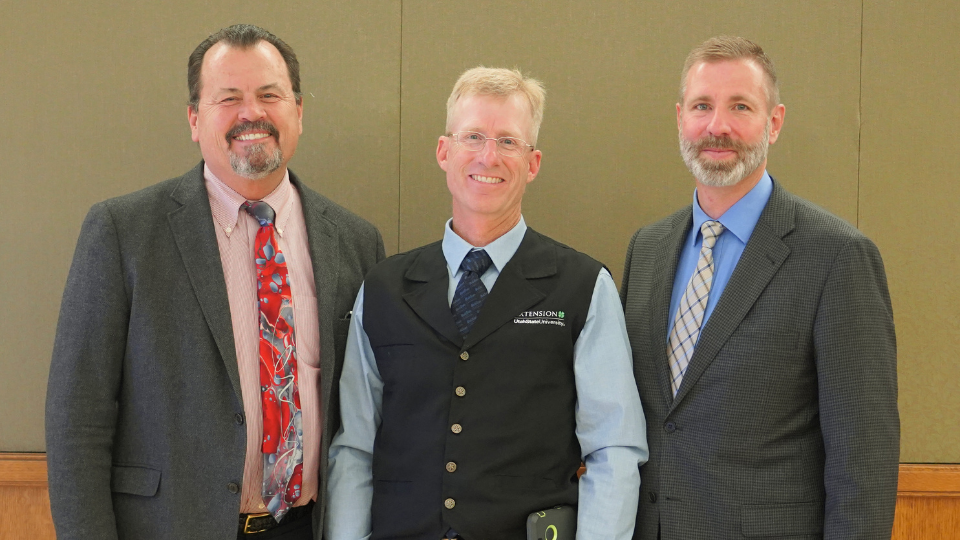 Matt Palmer, Utah State University Extension faculty in Sanpete County, was promoted to full professor in July. In celebration, he recently presented a summary of his career at a reception held at Snow College in Ephraim.

“It wasn’t that long after starting my career that the Internet became widely available to every home,” Palmer recalled. “At the time, people said it would be the end of Extension because people could get all their information there.”

But what happened was almost the opposite, he said.

“People need Extension more than ever because there is so much information on the Internet, but unbiased, research-based information is still hard to come by,” he said. “We are the search engine for good information.”

Palmer gave several examples of how county Extension offices link people to the university and help address community needs. His area of emphasis has been a sustainable approach to agriculture.

Sustainable agriculture is a holistic approach to problem solving, he explained. If we go after just one issue, such as profitability, and ignore natural resources and quality of life, we get out of balance. Likewise, paying attention only to natural resources can cause other imbalances.

“It took me a while to learn that just setting up a PowerPoint and presenting knowledge in a classroom wasn’t enough to get people to change behaviors,” Palmer said. “To address this, we were able to get land and funding to set up a sustainable demonstration facility on what used to be a turkey research farm. We have pressurized irrigation, a demonstration garden, pasture areas for cattle, and hoop houses for hands-on classes.”

Another success story he highlighted was the county Sustainable Grazing Institute. The Sanpete institute was adapted from an existing program in Idaho. It became successful enough to share around the state.

“Grazing management is both an art and a science,” Palmer said. “In three days, we were able to take ranchers from the classroom to a pasture and let them test the practices on a small herd of animals. A similar approach was taken on range management, which led to the Central Utah Grazing Expo.”

Though the evening was a celebration of his promotion, Palmer ended by emphasizing that it took a team to get so many things accomplished in the county.