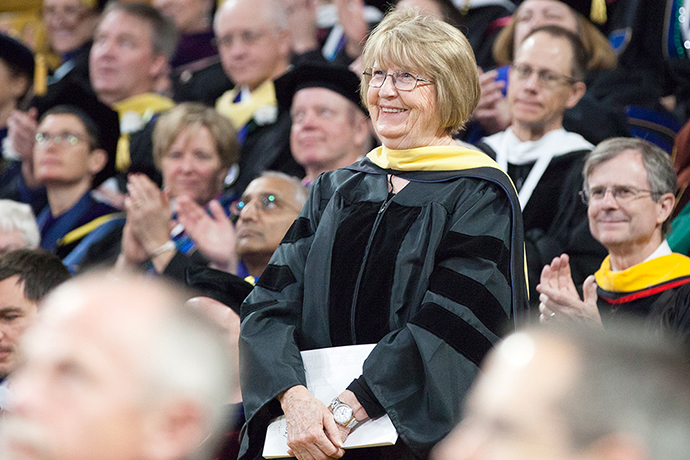 Diane Reese is the recipient of the E. G. Peterson Extension Award for 2017. Diane retires from USU Extension this year after 26 years of service. She has given her energy, passion and heart to USU through her many roles.

Diane was an Extension associate professor and Extension Director for the Northern Region for 12 years. Prior to that, she was Director for the Southwest Region for 9 years. The entire state has benefitted from her leadership and vision. Her thoughtful perspective and encouraging words have helped many, and Extension is a better organization because of her guidance. She has worked well with commissioners, stakeholders and county faculty to establish county priorities and budgets and has established a climate for programming efficiency and teamwork.

Diane started her career with Extension in 1990 as an agent. She received her MS degree in Human Environments in 1995 and worked full-time during the process. She became an Extension assistant professor in 1996 and associate professor in 1999. She has been a great wife, mother and an outstanding career woman. She is the mother of seven children, four of whom are living, and 16 grandchildren. She was the first woman regional director in Utah and has been a role model and support to many.

Diane always tried to learn from her faculty and staff and did all she could to support them. She listened carefully and didn’t form opinions until she learned facts and put everything into perspective. She made decisions based on what is best for the university, the county and the individual.

Diane has been a member of multiple state and national organizations. In addition, she was the Western Region Middle Managers Chair for Utah, where she planned events for Extension conferences for 13 western states. Diane has had a large supervisory role in Extension, overseeing personnel and programs in 22 of the 29 counties. In addition, she directed 17 continuing education sites.

Diane Reese is most deserving of this award that recognizes outstanding service. It is fitting that she is honored for her long-standing dedication to USU Extension by receiving  the E.G. Peterson Extension Award.