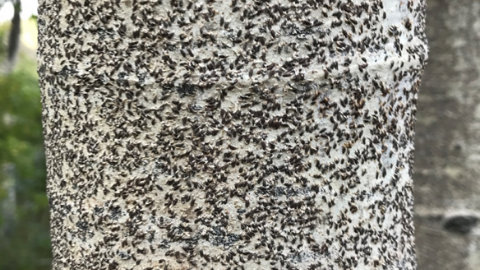 Oystershell scale, an invasive insect that can weaken and kill aspen trees, has recently been confirmed in native forests in Utah. The insect has been a common urban plant pest in the United States since the 1700s and has likely been affecting trees and shrubs in Utah landscapes for decades. However, the USDA Forest Service’s Forest Health Protection program only recently confirmed its presence in the Uinta-Wasatch-Cache National Forest in Pole Canyon, east of the Provo area.

“Quaking aspen is the most widely distributed tree species in North America, and it adds an important component of biodiversity, wildlife habitat, and fall color to Utah landscapes,” said Darren McAvoy, Utah State University Extension assistant professor of forestry. “This pest is a significant threat to the health of our Utah forests, and management options for dealing with it are limited and need more research.”

“Historically, other invasive species have practically wiped out certain species of trees in the U.S., including the American chestnut and western white pine,” he said. “Oystershell scale is known to have killed large groups of native forest tree species in several eastern states. It is currently causing significant damage to aspens in northern Arizona, where it has been active over the past decade, weakening and killing aspen trees below 8,200 feet in elevation.”

McAvoy said oystershell scale is a tiny sap-sucking insect that matures over the summer and develops a waxy outer shell that looks like a tiny oyster or mussel shell attached to the bark of the tree. Insects tend to congregate on the shady side of trees and branches, avoiding direct sunlight. Initially they will affect a small portion of a tree but can eventually encrust whole branches and cause branch dieback, leading to tree death.

“For this reason, it’s important to be extremely careful not to move firewood that is infected with the insects into a forest,” he said.

While there are more than 100 known host species of oystershell scale, it is best known for its effects on ash, aspen, willow, cottonwood, and boxelder trees in Utah. Although strategies for management are limited, the first step is to monitor its spread.

“Applying fire to the affected landscape appears to be the most promising management strategy for controlling the spread of oystershell scale, but we are just starting to learn about it, so more research is needed to understand this relationship,” McAvoy said.

Click here to see a journal article preview on oystershell scale by Conner Crouch of the Northern Arizona University School of Forestry.