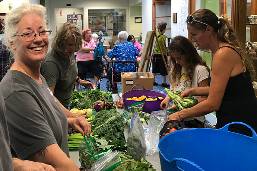 Katie Wagner is part of the horticulture faculty at Utah State University Extension and helps run the farmers market program. She said working together with multiple organizations like Adult and Aging Services and Wheeler Historic Farm allows seniors to save money and improve their health.

“We surveyed our seniors and we know that the majority of them don’t have gardens at home,” Wagner said. “Maybe they don’t have access, maybe they live in apartments, maybe they’re just not physically able to garden anymore. We’re delivering fresh produce to a population that has a limited ability to acquire produce on their own.”

“We surveyed the seniors and found that a lot of them are accessing food banks and food pantries,” Wagner said. “We also know that a lot of food pantries and food banks no longer handle fresh produce. There is just canned or frozen produce for people coming through, and some of our seniors have told us that this is the fresh produce they receive.”

In a survey, Wagner and her colleagues found 97 percent of seniors save money, 99 percent say they now have a healthier diet and 94 percent said access to the farmers market increases their consumption of fruits and vegetables.

Carrie Durward, USU Extension nutrition specialist, is gathering data with Wagner to evaluate the success of the program.

“One of the outcomes we’re interested in is whether seniors are actually eating more produce as a result of the program,” Durward said. “Since it is for low-income seniors who often struggle with food insecurity, or not having enough food, we’re also interested in looking at whether or not the produce donation helps with that.”

USU Extension traditionally reaches out to the public with direct education. Durward said in the field of nutrition, the public’s lack of knowledge isn’t always the problem.

“People know they should be eating more fruits and vegetables,” Durward said. “The reasons why they’re not is often related to other barriers. One of those barriers is cost for low-income seniors.”

The produce is free, and the gardens and farmers market for seniors is run by volunteers. Sharon Roper started USU’s Master Gardener program 4 years ago. Part of the curriculum requires 40 hours of volunteer work in an approved program. Roper chose to help grow produce for seniors and passed the 40-hour mark years ago.

“I get so much more than I give,” Roper said. “You take fresh produce that you’ve grown and give it to seniors who are very grateful, and when you leave, you feel like you’ve been rejuvenated. The saddest part is sometimes not having enough food to give away. That’s the only down side.”

Roper said one of the best aspects of volunteering is the opportunity to grow ethnic foods for refugees who benefit from the program.

“You start to learn what foods each of them like, so we try to bring those types of things,” Roper said. “I think what surprised me the most is how open seniors are to trying new foods. They love things that you wouldn’t think they would, things like okra and Swiss chard, and they’re very diverse in what they like to eat.”

When harvest season is at its peak in August, Roper said volunteering turns into a part-time job, but for her – it’s worth it.

“If we could all just give a little bit of ourselves, I think the world would be a much better place,” she said.