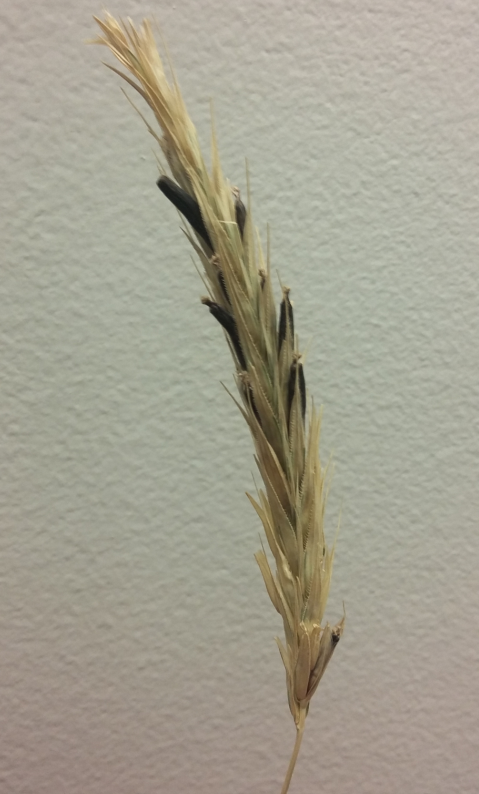 More than three centuries after the Salem witch trials, the unlikely culprit that many believe caused the mayhem has appeared again, this time in Utah.

As a family from Utah County recently traveled through central Utah, they noticed an unusual grain field next to the road. They thought it was some type of wild rice due to the slender, black kernels on the heads of the grain. They tasted it, liked it and decided they wanted to grow it. Luckily, they brought a sample to the Utah State University Extension office in Provo to be identified.

According to Dean Miner, USU Extension agriculture professor in Utah County, the plant was diagnosed as western wheatgrass infected with Ergot of Rye, a plant disease caused by the fungus Claviceps purpurea. The disease affects rye, wheat and other grains and grasses.

Miner said though ergot is uncommon now, it has played a significant part in history. Human poisoning was not unusual in Europe during the Middle Ages when ergot-infected rye bread was often consumed. Many thought ergotism was an infectious disease, but in 1670, French physician Dr. Thuillier proposed that the consumption of rye infected with ergot was responsible. Unfortunately, he was unable to convince farmers that this was the cause of the disease, and it was another two hundred years before it was recognized.

Many historians believe that an ergot infestation in Massachusetts caused strange activities among some women in 1691 and eventually led to the Salem witch hunts. Toxicologists now know that ergot poisoning can lead to convulsions, spasms, hallucinations, crawling sensations on the skin and erratic behaviors. Children and youths ages 5 to 24 are the most affected.

“Ergot cannot survive in the soil for more than one year, so crops are rotated,” he said. “Some fields are deep-plowed because ergot cannot germinate when buried more than one inch. In addition, wild grasses are prevented from reaching fields, and ergot-free seeds are now planted to avoid introducing or reintroducing the fungus to a field. Increased use of fungicides for many purposes has also reduced the incidence of ergot. Still, this points out the need for folks who mill their own flour, especially if they raise their own grains, to be mindful that some dark particles in the grain may be more than trash or mouse droppings.”

Miner said even with modern control measures, ergot does survive, as was manifested in the field the Utah County family visited, who, incidentally reside in Salem, Utah. Sometimes history does repeat itself.