Ask an Expert: Venomous or Not? Take Precautions to Reduce Snake Bite Risk 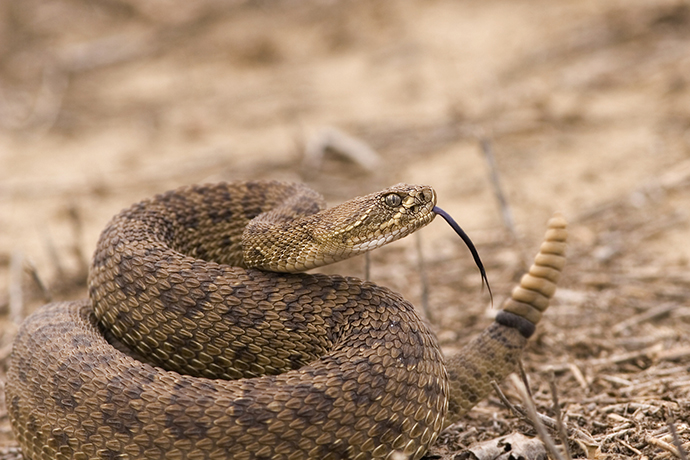 Because most snakes in Utah are non-venomous, most human-snake encounters are generally not dangerous. However, if you encounter a venomous snake and are bitten, the consequences could be serious, so it is important to know the difference between venomous and non-venomous snakes. Consider this information.

* If you encounter a snake, your best strategy is to leave it alone. Every year, hundreds of want-to-be herpetologists and snake charmers are bitten when they try to capture or kill a snake. Even dead snakes have been known to bite by reflex action. More than 7,000 venomous snakebites are reported every year in the United States. Of these, between nine and 15 are fatal. More than half of the reported bites were a result of someone trying to handle or kill the snake. It is always best to leave the area if you encounter a venomous snake. This will greatly reduce your risk of being bitten.

* When rattlesnakes are encountered or disturbed, the rapid vibration of their tails will make a characteristic rattling sound to warn the intruder of their presence. However, not all rattlesnakes will “rattle” when disturbed. For this reason, when you are in rattlesnake country, you must pay close attention to where you walk, sit and place your hands. Rattlesnakes can be found throughout Utah in sagebrush, pinyon-juniper woodlands, sand dunes, rocky hillsides, grasslands and mountain forests. They occur at elevations that range from sea level to timberline.

* Snakes are classified as non-game animals and are protected by Utah state laws. A person cannot collect or possess a live wild snake without receiving a Certificate of Registration from the Utah Division of Wildlife Resources. When there are human, domestic pet and livestock safety concerns, a venomous snake may be killed without a certificate.

* Non-venomous snakebites are harmless. The only concern may be for potential infection. If bitten, clean and sterilize the wound much like you would a cut or abrasion. Bites from venomous snakes will almost instantly show signs of swelling and discoloration of the surrounding tissue. Other symptoms include a tingling sensation, nausea, rapid pulse, loss of muscle coordination and weakness. Also, bites from rattlesnakes will show two characteristic fang marks (punctures) as well as other teeth marks.

* If someone has been bitten by a venomous snake, there are several things that should not be done. Do not allow the person to engage in physical activity such as walking or running. Carry the person if he or she needs to be moved. Do not apply a tourniquet to the area above the wound and do not apply a cold compress to the bite area. Do not cut into the bite. Do not give the victim stimulants or pain medications unless instructed by a physician, and do not give the victim anything by mouth. Do not raise the bite area above the level of the heart, and do not try to suction the venom, as doing so may cause more harm than good.

* All venomous snakebites should be considered life threatening. When someone has been bitten by a venomous snake, time is of the essence. If possible, call ahead to the emergency room so anti-venom can be ready when the victim arrives. Until then, keep the victim calm, restrict movement and keep the affected area below heart level to reduce the flow of venom. Wash the bite area with soap and water. Remove any rings or constricting items, as the affected area will swell. Cover the bite with clean, moist dressing to reduce swelling and discomfort. Monitor the victim’s vital signs (pulse, temperature, breathing, blood pressure). If there are signs of shock, lay the victim flat and cover with a warm blanket. Get medical help immediately. Bring the dead snake in for identification if this can be done without further risk of injury.