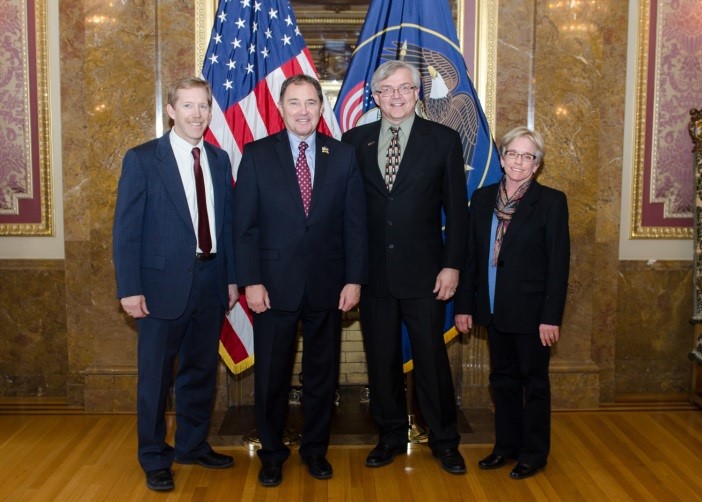 In an effort to keep greater sage-grouse off the federal endangered species list, Utah Gov. Gary Herbert signed an executive order Tuesday, Feb. 10, 2015, directing state agencies to protect and preserve the bird and its habitat.

“We care about the greater sage-grouse, we care about its habitat,” said Herbert, who also noted listing would have a “significantly devastating impact” on Utah’s economy by placing restrictions on agriculture and energy development.

Utah State University Extension wildlife specialist Terry Messmer, who has led statewide sage-grouse conservation efforts for more than 20 years, was among dignitaries invited to participate in the signing ceremony at the state capitol in Salt Lake City.

The executive order cites efforts by USU Extension, including facilitation of an on-going community-based conservation program engaging thousands of stakeholders in local working groups to develop and implement conservation efforts. The program is widely praised as a model for other states.

The governor’s order also highlights USU research efforts to further knowledge of the bird’s ecology and to provide science-based best practices to protect and increase sage-grouse habitat and populations.

“The executive order fully implements the Utah Sage-grouse Conservation Plan, which was built on nearly two decades of research and local working group involvement,” says Messmer, Quinney Professor for Wildlife Conflict Management in USU’s Department of Wildland Resources. “It establishes a framework for increases coordination and communication among state agencies to benefit the species and sustain local communities.”

Messmer is quick to recognize Utah citizens who jump-started the conservation efforts.

“Our research started in 1996 with a $3,000 check given to me by rancher Andy Taft of Piute County’s Parker Mountain Grazing Association,” he says. “We have more than 40 public and private funding partners now, but that initial level of commitment and passion has sustained and defined our efforts throughout these years. Gov. Herbert’s order validates these local community efforts.”

“Terry and his colleagues are making a tremendous impact in Utah and across the region,” White says. “Their work is a great example of how Extension’s ability to get up-to-date, research-based information to people can help resolve issues that affect people and their communities.”

The governor’s order arrives just as male sage-grouse are beginning their distinctive mating ritual known as “strutting on the leks” – a dance-like display to attract females – during this year’s unusually warm Valentine’s season.

Dahlgreen says hens are not as easily fooled by warm weather as males. For many avian species, he says, the onset of reproduction in females is strongly related to the amount of sunlight in a given day as well as ambient climatic conditions.

“Nest initiation could occur earlier this year, but not quite this early,” he says.