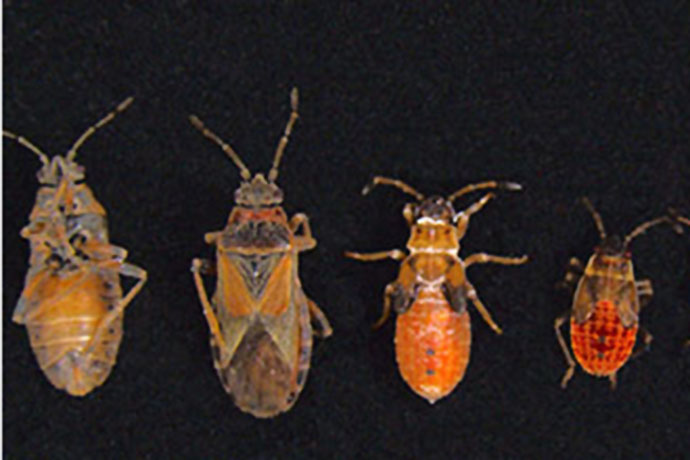 There’s a new bug in town. Since July 2014, Utah State University Extension’s Utah Plant Pest Diagnostic Lab has received numerous calls about a small, brown and black insect gathering in and on homes. The elm seed bug, a native of Europe, was first identified in the United States in Idaho in 2012 and in Oregon in 2013. While the first samples from Utah came from Salt Lake County, the insect is likely well established along the Wasatch Front and Cache County.

Elm seed bugs feed mostly on elm seeds, but can be found on other trees, such as the linden. Luckily, the bugs are not a concern for the health of elm trees, but they have become a nuisance pest, similar to boxelder bugs, by entering homes and buildings in the spring, late summer and fall. However, unlike boxelder bugs, these bugs can emit a pungent smell, similar to bitter almonds, from their scent glands.

Adult elm seed bugs spend the winter in homes or in hidden places outside homes and in the landscape. In March, they emerge and spread to nearby elm trees. They are also attracted to elm seeds piled around structures. Egg laying begins in early May, and immature elm seed bugs emerge in mid-to-late May and go through five growth stages before becoming a winged adult. The insects are believed to have only one generation per year. Home and building invasions generally occur from late May through late September.

Control with insecticides can be difficult because elm seed bugs are so mobile. Pest-proofing homes and buildings is the best way to deal with elm seed bugs and boxelder bugs. The exclusion techniques described in the USU Extension Boxelder bug fact sheet will also help provide relief from this new pest. Where swarms are found, such as on warm exterior walls, the bugs can be vacuumed up into soapy water to quickly reduce large populations. More information on the elm seed bug and its control can be found in the fact sheet here.

Appropriately labeled and applied insecticides may reduce the number of elm seed bugs that enter the home, but pesticides are not long-term solutions. As with many nuisance pests, exclude elm seed bugs by installing tight-fitting door sweeps and screens. Seal cracks and crevices, especially in areas around windows, doors and vents where insects can easily gain access.