Ask an Expert: Wildlife and Roads Don’t Mix - Be Aware of Animals on the Move 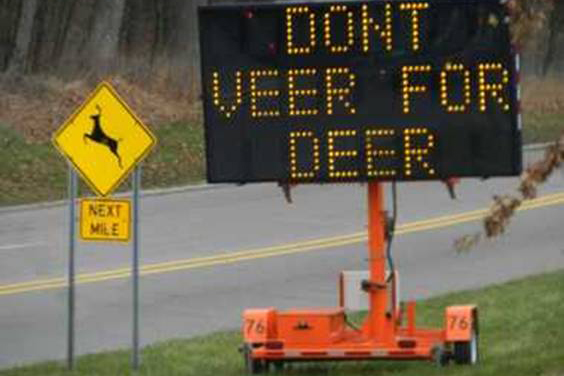 With snow blankets at higher evaluations, wild animals are on the move. Most of them cross our roads during their seasonal migrations as they search for food, water and cover.

Wild animals often move under the cover of darkness, with peak times during the low light of dawn and dusk. Unfortunately for them, and the unwary motorist, these peak times often coincide with rush hour.

Deer migration corridors are the areas of highest risk and are often clearly marked with signs. However, many motorists who drive by the signs daily become oblivious to them. Even marking the signs with flags and flashing lights have failed to garner increased attention of the higher collision risk.

Research from Utah State University confirmed that if motorists actually drove the speed limit in the areas of highest risk, they could reduce their chances of having a deer-vehicle collision by over 200 percent. Most Las Vegas gamblers would take those odds anytime!

While we can’t anticipate the actions of wildlife crossing the roads, we can take actions to better prepare ourselves for encounters by learning about wildlife behavior and driving more defensively.

Here are your best tools:

* Be especially alert at dawn and dusk. Motorcyclists should be extra cautious during these times.

* Heed the wildlife crossing signs by slowing down. These signs are placed in the areas known to have the highest number of wildlife-vehicle collisions.

* Be especially alert on roadways near wooded, agricultural and wetland areas and by lakes and streams.

* Scan both sides of the road. Ask your passengers to also help you look for wildlife. When able, use high beam headlights to illuminate the road.

* Do not drive distracted. Put away food, phones and any other distractions.

* Look for the shine of an animal’s eyes, which can be seen from a distance. Slow down if you have spotted an animal near the road.

* Animals often travel in groups, and there may be more following behind the first one, so keep watching. In addition, an animal that has crossed the road may try to cross again.

* Do not throw food scraps or trash out of your vehicle. These can attract animals to the roadways.

* Most importantly – drive the speed limit and buckle up.

* If you see an animal on the road, do not swerve. Stay in your lane and slow down.

* If several animals are standing in the road, do not try to drive through them or get out of the vehicle to chase them. Honk your horn and flash your lights to encourage them to move on.

* If you have a vehicle-wildlife collision, pull off the road and turn on your hazard lights. Do not try to approach an injured animal.