Ask an Expert: Seven Tips to Keep Birds from Hitting Your Windows 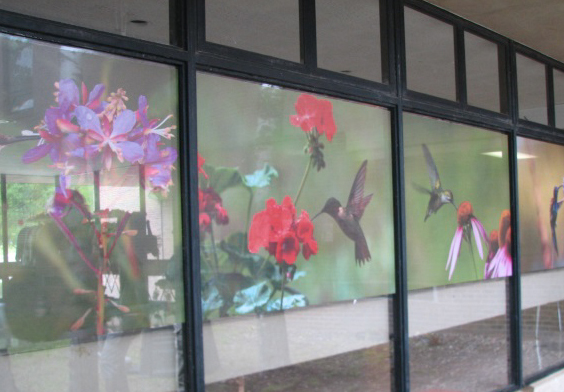 Every year in the United States, it is estimated that nearly 600 million birds are killed from flying into windows. Some researchers say that number may be as high as 988 million, which is approximately 10 percent of the bird population in the country.

Birds fly into windows because they don’t see them the way humans do. To a bird, a transparent window is simply a big open space to fly through, or reflections in the window may show more areas of open sky, trees and grass. Sometimes during the breeding season, males will fight with their reflection in the window thinking it’s another male intruding on its territory.

Birds hitting windows can be worse if trees bearing ripe berries are situated close to windows. Birds will often gather in these trees to eat the berries. When a predator appears, flocks can be scared and fly into windows, thinking the reflection of trees and sky offers escape.

During migration season (spring and fall), many birds use the night stars and moon to help them navigate to their final destination. Unfortunately, dense urban areas with lighted buildings can cause birds to go off course, luring them in. Birds may die by colliding with these lighted structures or by the exhaustion of trying to reach the light source. Additionally, because birds see at a higher frames-per-second rate than humans, many low-frequency, human-made light sources are seen as constantly flickering by birds, causing them to become disorientated, confused and stressed. 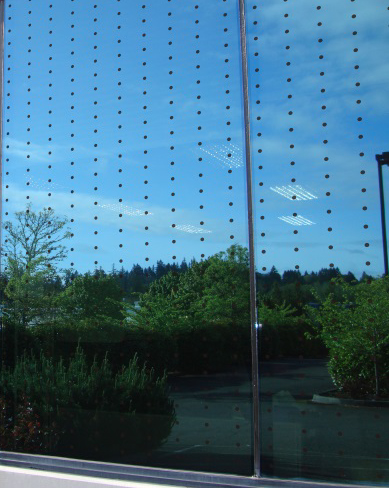 To reduce the risk of injured birds, consider these tips.

* Be aware of your landscaping, especially if you like to feed birds. Trees situated close to windows less than 3 feet away don’t allow birds to build up too much speed before they collide, but trees farther away can allow birds to reach up to 30 m.p.h. before they collide. Consider putting feeders/birdbaths 3 feet or closer to a window or greater than 30 feet away. Or, put them next to windows that have screens or a good amount of vegetation in front of them.

* During migration season, April to June and August to November, turn off outside lights and close drapes and blinds at night to prevent luring birds in with dazzling lights, especially if you live in an urban area. This has been found to reduce collisions by up to 80 percent in some areas.

* Add traditional screens to problem windows. This will help break up the reflection of the window and soften the impact on the bird.

* Break up large window reflection space. One or two window decals will not be enough. Various “bird string” products of nylon cords and similar materials help break up reflections. Also, “bird tapes” can be placed directly on the glass in rows 2 inches apart and columns 4 inches apart.

* Try ultraviolet (UV) patterns for a no-show option ranging from UV stickers to UV liquid pens to draw grids on problem windows. Birds can see in the UV spectrum, but the human eye can’t, so this is often a good option. However, certain UV patterns may need to be replaced from time to time as the UV “glow” may wear out.

* Try film patterns that range from simple to stylish and artistic. Most of these have a transparent side and a reflective side, which faces out. It is important that the pattern contrasts well against the window and is at least 1/8-inch wide. Use enough film to fill the window. If there is a large space showing on the window, it may still be enough to attract or confuse a bird.

* Don’t use bird deterrents such as hawk silhouettes or plastic owls to keep birds away, as they become accustomed to the object and lose fear of it. Additionally, the reflective qualities of the window will still be there.

If a bird does hit your window and is seriously injured, place it in a covered box with a towel at the bottom. You may also place the box over a heating element set on low. Keep it in a dark, quiet place. If the bird is alert and able to fly after an hour, release it. Otherwise, take it to your local Wildlife Rescue Center or contact your local Utah Division of Wildlife Resources Office.

Further information on the topic can be found here.