Taylor Boardman, a senior at Delta High School and a Utah State University Extension 4-H member, recently received the STEM Innovation Award from the Utah STEM Action Center for his accomplishments in technology and engineering.

The award recognizes individuals in Utah who are excelling in science, technology, engineering and math. Boardman was the only student chosen in Utah to receive t 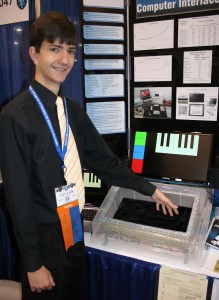 he award. The STEM Action Center Board chose the honorees through a rigorous process. Boardman was recognized and received a trophy and an iPad mini.

Boardman began participating in the Southern Utah University Science and Engineering Fair when he was in seventh grade. He has won first place every year that he has participated.

“I participate in STEM activities because they give me experience,” Boardman said. “They help me become better overall.”

Boardman has been selected three times to compete internationally. He won fourth place at the 2014 Intel International Science and Engineering Fair, the world’s largest international pre-college science competition that has more than 1,700 students from around the world competing for awards.

Boardman said he learned skills in the USU Extension 4-H club that have been connected to his STEM projects.

“We need kids to be interested in science and technology fields, to lead innovation and to solve the problems our world will face,” said Dave Francis, USU Extensi

on 4-H youth development specialist. “That’s why the USU Extension 4-H program ties in STEM as much as possible.”

“That really helped me become a leader,” he said. “When you teach something, you become better at it.”

These skills have made Boardman stand out, according to Karen Banks, USU Extension 4-H assistant.

“Taylor has been an awesome young man to work with,” Banks said. “He has so much knowledge within his area that it makes it fun to learn from him.”

Boardman also said that his involvement in STEM activities has helped him in the classroom.

“I can use the things I’ve learned to better understand the concepts in my math and physics classes,” Boardman said. “I’m glad that there is a push for the STEM programs. It is amazing how much they interconnect.”

Boardman plans to study computer engineering at BYU after serving an LDS mission.