A team of teenage refugees from Cottonwood High School, including a number of Utah State University Extension 4-H members, competed at the Regional FIRST Robotics Competition and won in the Rookie Category. They will go on to compete at the FIRST World Robotics Competition in Houston on April 17. 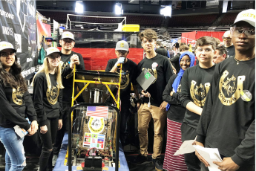 The team, named the Cottonwood High Underdogs, is made up of 14 teens from countries such as Haiti, Iraq, Myanmar, Somalia and others. Many have been in the United States only a short time and chose to join the team as a way to meet new people and improve their English.

“Despite recently coming from many different countries with different languages, the team worked together so well that, in six weeks, they learned enough and worked hard enough to build a robot to compete against well-established and well-funded teams from around the world,” said Chris Hirschi, the team’s coach and mentor. “The combined quality of their robot, teamwork and STEM outreach earned them a spot at Nationals in Houston this month."

All the robotics teams were challenged to design and build robots that collect “planetary samples,” which they store in cargo pods using robots either operated autonomously by computer code or guided with a video system manually.

“I decided to spend my time in something that is helpful for my future,” said Abdul Bari Ayubi, a team member from Afghanistan. “I want to be an engineer, doctor or teacher in the future and being able to really work together with what I like for a good cause is a one in a million opportunity. We can spend two hours of our life sitting at home, playing game or watching tv, or spend it doing something to lead us to have a better future.”

“We want to help youth gain the life skills now, and especially the application of those skills, while they are young so they can compete in the job market later on,” said Nysse Wilson, USU Extension 4-H refugee program coordinator. “Many youth have not had this type of experience before, and seeing their level of personal dedication and initiative is invigorating. Youth get the opportunity to teach, mentor and inspire younger youth, and robotics is an exciting way to involve youth of varying ages and cultural backgrounds. Technology, especially in a team setting, can also serve as a common language.”

To contribute to the Cottonwood High Underdogs’ trip to the FIRST World Robotics Competition, visit https://extension.usu.edu/donate, select Salt Lake County, and type in “Refugee FIRST Robotics Team.” All donations will go directly to the team.

More information about USU Extension 4-H programs can be found at https://utah4h.org/.