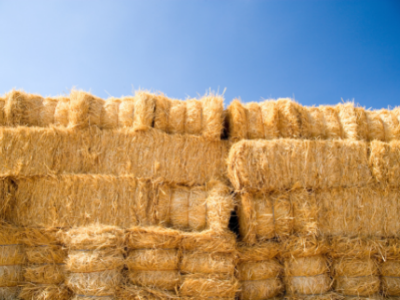 As producers in Utah and the intermountain west enter another year of drought it is important to critically evaluate feed sources that may be available for cattle. The traditional method for sustaining a herd through a drought is to feed extra stored forage to compensate for decreased forage production, or decreased forage quality available on rangelands and pastures due to drought conditions. However, hay prices have rose to unprecedented prices and availability has decreased due to irrigation water limitations and increased demand from livestock producers. This fact sheet will evaluate why hay prices are rising, and what alternatives may be available to feeding hay in order to compensate for forage reductions during drought.

Why do hay prices increase during drought?

To understand why hay prices increase during a drought we have to rely on one of the first principles we learn in economics, supply and demand. The supply of hay in the west varies due to changes in precipitation. The fact is that that we rely on irrigation water to grow hay in most of the Intermountain States. Utah is particularly susceptible to irrigation water shortages disrupting hay production. A lot of Utah’s irrigation water comes from stored water in reservoirs but during multi-year droughts the effect of decreased precipitation will affect overall hay production. This means the hay producers must raise the prices because it has cost them as much as previous years to produce the hay but they have less product to sell to the consumers as a result of decreased production. The second reason hay prices increase is demand from livestock producers. Being that there is a limited supply of what everyone needs (hay) there is competition to buy what limited resources exist. Those competing for the hay include traditional cattle producers, dairies, horse producers, and other livestock producers. Compounding this demand issue, livestock producers are typically buying more hay than they normally would due to drought.

Use of Alternative Feed Sources

Livestock producers have traditionally used hay because it is readily available in most years, it’s easy to feed, stores easily and animals will perform well if fed properly. However, in a multiple year drought, like the one that intermountain west is facing, it’s not as readily available and purchasing above normal amounts will dramatically increase the cost of production for many producers. As livestock producers may consider the use of non-traditional or alternative feed resources in order to meet our livestock’s nutritional needs without increasing production costs. However, when using alternative feeds, it is essential that the feed stuffs not only meet livestock nutritional needs but also be cost effective and fed on a least cost basis (Lardy et. al 2016)

Many of the alterative feeds are classified as food production byproducts that are no longer usable for human consumption but may provide significant nutrient value to livestock. However, many of these alternative feeds are used as a supplement to extend hay inventories in an effort to decrease the amount of hay that is needed to meet livestock nutritional needs. Being that these feeds are used to supplement hay usage and there is some nutritional variability in alternative feed nutritional value, it is recommended that a feed analysis be conducted prior to feeding (Lardy et. al. 2015). Furthermore, it is important to note that cattle have different nutrient needs depending on what stage of production they are in (Table 1).

Table 1. Nutrient demands of beef cattle prior to calving

While there are many advantages to utilizing alternative or nontraditional feeds, there are some considerations that must be evaluated prior to using these types of feeds. The first is the transportation of the feed. If the feed is being delivered to you, there must be a cost analysis to include the shipping of the feed to determine if the alternative is still cost effective when compare to utilizing hay. The second factor that must be considered is storage of the feed. In many cases the alternative may come in a pelleted form, may have a higher moisture content than hay, or may come in a form that will require a new method of feeding. Specifically, feeds that are higher in moisture may have to be stored differently and may have a shorter stored life than dried, cured or pelleted feeds. The last factor that must be considered is the level of starch in the feed. If high levels of starch or sugar is present in the feed, this may result in altering the PH of the rumen. When starch ad sugar is rapidly digested in the rumen this can result in the rumen becoming more acidic. Long term acidity in the rumen can result in acidosis, which can lead to deceased productivity and even death. As such, it is important that forages (hay) still be incorporated into the diet and starch rich feeds be mixed in at proper levels.

Utilizing crop residues via grazing or feeding may be the easiest method the maximize the use of unharvested feed post-harvest. Grazing harvest or crop waste allows animals to select higher quality feed that would normally be obtained by feeding harvested product that had been mechanically separated. This feed can include regrowth, shelled grains, or stubble that can be grazed directly. This strategy has many benefits such as The first is this strategy is that this method is extremely cost effective and cattle have access to high quality feed that is usually lost to waste. The second is that manure is spread around where the cattle graze, which is lower in cost than removing from pens and then subsequently spreading. However, there is some drawback to this strategy as well that must be considered. Mineral, protein and energy supplementation are likely still required.

While there are many benefits to this strategy the potential of nitrate poisoning needs to be evaluated. Specifically, drought stressed plants can accumulate nitrate, and fields that have been recently fertilized should avoid being grazed. It is important to note that as plants mature, nitrate levels decrease and stalks potentially contain more nitrate than leaves and seed. However, not all drought conditions lead to excess nitrate levels. There must be some moisture in the soil for the roots to uptake the nitrate. If the soil is dry little uptake of nitrate will occur, but if there is a rain event, nitrate levels will remain high for several days following rain. Thus, it is important to have potential feed sources tested and dilute or combine potential high nitrate sources with other forages or feedstuff lower in nitrate.

Another option that appears to be readily available in the intermountain west is the use of pelleted feeds such as alfalfa pellets. There are three major benefits to utilizing this feed at the current time. The first is that it is more cost effective to purchase than hay. Currently, a ton of pelleted alfalfa can be purchased for $200-300/ton when compared to hay that is currently being sold for $350-$400/ton. A second major benefit is that it is palatable to cattle and we know they will eat it willingly. However, it has been reported ((Bruegger et al. 2020) that cattle will ingest pellets much more rapidly, so there may be an acclimation period to when animals will not display as hungry due to feed not being present for longer periods of time. The last major advantage is that there is typically less wastage associated with pelleted feeds. Specifically, cattle are not pulling feed away from a bale, putting it on the ground and then stomping it into the soil. Pelleted feeds are typically easily ingested from feeders or troughs and not as much is wasted on the ground. However, in many instances this may require the investment of troughs or bunks to minimize wastage of the pelleted feeds. While pelleted feeds have some significant advantage, it is still very important to calculate shipping costs, how this feed will be stored and any modifications that may be needed to feed this alternative in your operation.

A major advantage with the boom of microbreweries in the western United States is the availability of brewers grains or brewers waste. These are spent grains (barley or a mixture of barley and other cereal grain or grain products) that result from brewing beer. In the past the sole source of these grains was from large commercial brewing operations, but as previously mentioned due to the microbreweries boom these have become more available on a smaller scale. Due to the higher protein and energy content of many of these grains they do tend to be higher priced. Therefore, they are very valuable and should be used when protein and energy supplementation is needed, and should be fed in combination with adequate amounts hay. However, one of the major disadvantages to brewers grains is that they tend to have about a 75-80% water content (Gadberry 2014). As such a load of brewers grains that is received during the summer months should be fed within in a week of delivery to avoid spoilage. This can be seen as both an advantage and disadvantage. While the smaller scale breweries can only supply a smaller amount of brewer grains, it may prove advantageous because the feed needs to be utilized quickly, so large stored amounts may result in large amounts of wastage.

While this is a much broader category, it usually encompasses products that are produced from the production of human food. This can be anything from byproducts (yogurt waste, cereal grain waste etc), to factory rejects of cereal, or human snack food. While these are more readily available, they do come with the disadvantage of being variable in their nutrient value. As with any of the other alternative feed sources, their nutrient value needs to be evaluated, palatability (potential acclimation time for animals to eat) and shipping and storage considerations need to be evaluated.

In a multiple year drought like the one the intermountain west is currently facing, it is vital that producers implement unconventional practices to keep operations economically resilient. Increasing hay prices, decreasing hay supply and increasing competition for hay resources, are a catalyst to producers consider alternative feed sources. The importance of evaluating and incorporating alternative feed sources into our production system allows producers to maintain productivity while maintaining a cost of production that allows us to be resilient during volatile environmental and market situation. However, as with any new production practice it is essential that risk, cost and long-term effects be evaluated. Specifically, with alternative feeds we must evaluate the nutrient value of what we want to incorporate, how it will supplement our hay feeding, if it will prolong our hay storage, will it allow our animals to remain productive and most importantly it is cost effective.