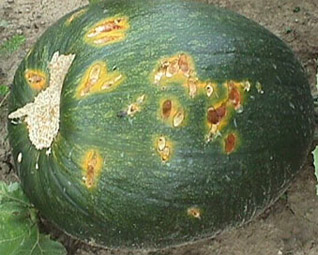 If your pumpkins and melons are marked with holes and yellow and brown spots, it could be the work of crows.

Crows are omnivorous, eating almost anything, and they readily adapt food habits to changing seasons and available food supply. They belong to a select group of birds that are equally adept at live hunting, pirating and scavenging. Crows are known to consume more than 600 different food items. About one-third of their diet includes animal matter such as grasshoppers, beetles, beetle larvae, caterpillars, spiders, millipedes, dead fish, frogs, salamanders, snakes, carrion and eggs and young of birds. The remainder of the crow’s diet consists of vegetable or plant matter including corn, with much of it obtained from fields after harvest, acorns, various wild and cultivated fruits, watermelon, pumpkins, wheat, sorghum, peanuts, pecans, garbage and miscellaneous other items. Damage to watermelons and pumpkins has been reported across Utah.

The American crow is one of the best-known birds. Males and females are outwardly alike, and their large size of 17 to 21 inches long, coal-black plumage and familiar “caw caw” sound make them easy to identify.

Crow populations in Utah, especially along much of the Wasatch Front, have steadily increased since 1990. Every winter, a Christmas bird count survey is conducted in Utah. During the survey, the number of crows spotted between Logan and Salt Lake City increased from about 400 in 1990 to more than 2,400 in 2011. Not every crow is counted, but the trend suggests a six- fold increase.

Overall, the amount and degree of damage is highly variable from place to place and year to year. Factors include season, weather, time of harvest, amount of crop production and availability and distribution of food.

* Exclusion is generally not practical for most crow problems, but may be useful in small gardens and yards. Nylon or plastic netting could help exclude crows from high-value crops or small areas. Protect ripening corn in small gardens from damage by placing a paper cup or sack over each ear after the silk has turned brown.

* Another option to protect fields is to stretch a cord or fine wire at intervals across the field about 6 to 8 feet above the ground near specific sites that need protection.

* Thinning branches from roost trees or thinning trees from dense groves reduces the number of perch sites and opens the trees to weather effects. This has effectively dispersed starling/blackbird roosts and could be effective for crow roosts as well. Thinning about one-third of the trees improves the tree stand, especially if marked by a professional forester.

* Frightening is effective in dispersing crows from roosts and some crops. In a recent study in California, crows were successfully dispersed from urban crow roosts using tape-recorded squalling calls of a crow struggling to escape from a predator. Additional frightening devices include gas-operated exploders, battery-operated alarms, pyrotechnics, (shell crackers and bird bombs), chemical frightening agents, lights on roosting sites at night, bright objects, clapper devices and various other noisemakers. All must be used with caution and according to label directions. Beating on tin sheets or barrels with clubs can help in scaring birds, and spraying birds with water from a hose or from sprinklers mounted in the roost trees can be helpful. Hanging Mylar tape in roost trees may work in urban areas. A combination of several scare techniques works better than a single technique. Vary the location, intensity and types of scare devices to improve their effectiveness. Ultrasonic (high frequency, above 20 kHz) sounds are not effective in frightening crows and most other birds because, like humans, they do not hear these sounds.

* Crows are now considered a game species in Utah. This was as a recent change by the Utah Wildlife Board to address increasing concerns about crow depredation to crops. Starting this fall, hunters can help control a growing population of American crows in Utah. The 2014 crow hunt runs Sept. 1 to 30 and Dec. 1 to Feb. 28. More information about the hunt will be available in the 2014–2015 Utah Upland Game and Turkey Guidebook. The free guidebook should soon be available at wildlife.utah.gov/guidebooks.

For more information about managing damage caused by crows go to http://icwdm.org/handbook/birds/AmericanCrows.asp